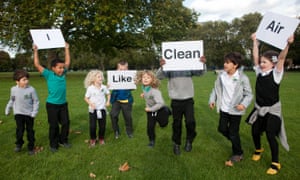 Councils are failing to monitor most schools in Britain for dangerous air pollution despite government advice, freedom of information requests have revealed.

All Britain’s 433 local councils were asked by the British Lung Foundation (BLF) whether they placed pollution monitors within 10 metres of school grounds. Of the 322 which replied, only 140 said they did.

In urban areas identified by the World Health Organisation as having harmful levels of particulate pollution, nearly half were found to be monitoring only one or two schools. Less than one in three local authorities monitored more than two schools.

Air quality monitoring guidance for the UK is drawn up by the Department for Environment, Food and Rural Affairs (Defra). The government does not insist that schools are monitored and local authorities are left to implement and interpret results and take action where needed.
The survey showed “alarming discrepancies” in council behaviour, said a BLF spokeswoman. Some used very simple diffusion tubes to measure only NO2 gas, but others monitored for different-sized particles called PM10s and 2.5s which are spewed out by traffic and industry, she said.

Equally, some authorities monitored the air close to school playgrounds, but others measured air quality hundreds of metres away.

“The guidance on monitoring that Defra gives local authorities needs to be revised and strengthened. Parents should be able to tell what their children are breathing, especially if they have conditions like asthma,” the spokeswoman said.

Concern about children’s health has grown following new scientific research which has shown lung capacity can be permanently impaired by pollution at very early ages.

A study of 2,400 children at 25 schools across east London found children had 5-10% less lung capacity, with an increased risk of diseases such as asthma and bronchitis.

According to the BLF, nearly 1 million schoolchildren up to 15 years old have been diagnosed with lung conditions.

“Children and teaching staff are not being made fully aware of the health risks posed by air pollution. Local authorities need clear guidance to monitor the air that children breathe as well as more resources and funding to tackle it,” said Russell Hobby, general secretary of the National Association of Head Teachers.

“Children’s lung health is particularly vulnerable to air pollution, yet they are not being protected by the government’s air quality monitoring guidance. There is a huge discrepancy in the levels of monitoring outside schools across the country, with many schools in the most harmfully polluted places not being monitored,” said Dr Penny Woods, chief executive of British Lung Foundation.

A an LGA spokesman said: “Councils follow guidelines on monitoring air pollution which are laid down by central government. These are to take a risk-based approach – monitoring those locations where members of the public might be regularly exposed.

“As well as schools this could also include residential properties, hospitals and care homes – depending on which area is at greatest risk. Many schools are actually some distance from busy roads and therefore unlikely to have high air pollution levels.”

He added that the “real issue” was for councils to move from monitoring pollution to acting on it, which would take government support.

A report that was commissioned but not published by London city hall under Boris Johnson showed that the number of primary schools in the capital breaching EU pollution levels had fallen from 433 in 2010 to 357 in 2013.

Another report, for the mayor of London, found children at nearly 90 secondary schools in London regularly breathed illegal and dangerous levels of air pollution.

Research by the Campaign for Clean Air found that 1,148 schools in London are within 150 metres of roads carrying 10,000 or more vehicles per day, and a total of 2,270 schools are within 400m of such roads.

“Children across the UK are exposed to illegal levels of air pollution on a daily basis. Air pollution is an invisible problem and parents have a right to know if their children are breathing dirty air, so it should be monitored,” said Andrea Lee, healthy air campaigner at environmental law firm ClientEarth.