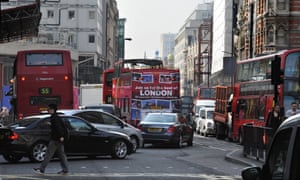 Drivers of polluting diesel vehicles could soon be charged to enter many city centres across Britain, after the government accepted in the high court on Wednesday that its current plans to tackle the nation’s air pollution crisis were so poor they broke the law.

The humiliating legal defeat is the second in 18 months and ends years of inadequate action and delays to tackle the problem which causes 50,000 early deaths every year.

Ministers are now bound to implement new measures to cut toxic air quickly and the prime minister, Theresa May, indicated the government would this time respond positively: “There is more to do and we will do it.”

The most likely measure is using charges to deter polluting diesel vehicles from “clean air zones” in urban centres, which could be in place next year in London and in 2018 in Birmingham and other cities. Nitrogen dioxide, the pollutant at the heart of the legal case, has been at illegal levels in 90% of the country’s air quality zones since 2010 and largely stems from diesel vehicles.

EU law requires the government to cut the illegal pollution in the “shortest possible time” but legal NGO ClientEarth, which brought the cases, argued the government’s plans ignored many measures that could help achieve this.

In the high court on Wednesday, Mr Justice Garnham agreed. He said it was “remarkable” that ministers knew they were using over-optimistic pollution modelling, based on flawed lab tests of diesel vehicles rather than actual emissions on the road, but proceeded anyway. He also said the law required the protection of health to come above the costs of measures: “I reject any suggestion that the state can have any regard to cost.”

The government said it would not appeal against the decision and agreed in court to discuss with ClientEarth a new timetable for more realistic pollution modelling and the steps needed to bring pollution levels down to legal levels. The parties will return to court in a week but if agreement cannot be reached, the judge could impose a timetable upon the government.

At prime minister’s questions, May said: “We now recognise that Defra [the Department for Environment, Food and Rural Affairs] has to look at the judgment made by the courts and we now have to look again at the proposals we will bring forward. Nobody in this house doubts the importance of the issue of air quality.”

The government’s own estimates show air pollution causes at least £27.5bn a year and in April MPs called the issue a “public health emergency”.

ClientEarth lawyers said they looked forward to working with Defra ministers to make a genuine attempt to rapidly cut pollution to legal limits throughout the UK, including a national network of clean air zones by 2018. “The government will have to be tougher on diesel,” said James Thornton, CEO of ClientEarth. “If you put in clean air zones, it works overnight.”

“Today’s ruling lays the blame at the door of the government for its complacency in failing to tackle the problem quickly and credibly,” said the mayor of London, Sadiq Khan, who took part in the case. “In so doing they have let down millions of people the length and breadth of the country.” Khan aims to have pollution charging in place in central London by 2017 and across the area within the north and south circular roads by 2019.

ClientEarth defeated the government on the same issue at the supreme court in April 2015. Ministers were then ordered to draw up a new action plan, but on Wednesday that new plan was also found to be illegal. The UK’s duty to cut illegal air pollution as quickly as possible derives from EU laws but the action required following the high court defeat will be taken well before Brexit takes place. The government has said it will transfer all EU rules into UK law but, post-Brexit, the government could revise air pollution legislation.

The court defeat is also a blow for the new runway at Heathrow the government has backed. Its approval depended on the effectiveness of the government’s national air pollution plan to meet legal requirements on air quality. The Liberal Democrat leader, Tim Farron, said: “This ruling deals a huge blow to May’s reckless Heathrow expansion plans. The government has already illegally delayed meeting EU pollution limits until 2025 – building a third runway would make the situation even worse.”

Documents revealed during the high court case showed the Treasury had blocked initial government plans to charge polluting diesel vehicles for entering towns and cities blighted by air pollution, due to concern about the political impact of angering motorists.

Both the environment and transport departments recommended changes to vehicle excise duty rates to encourage the purchase of low-pollution vehicles. But the Treasury also rejected that idea, along with a scrappage scheme for older diesels, which ClientEarth supports.

The government’s draft plan had envisaged 16 clean air zones, but in the final plan the number was cut, on the grounds of costs to business, to just five outside London: Birmingham, Leeds, Nottingham, Derby and Southampton. The further cities and towns that now need to introduce clean air zones will be determined by the more realistic pollution modelling ordered by the court on Wednesday.

Keith Taylor, Green party MEP, said: “The failure highlighted by the judge today is as much moral as it is legal: ministers have displayed an extremely concerning attitude of indifference towards their duty to safeguard the health of British citizens.”