Beijingers woke up to extremely thick haze and PM10 levels of over 2,000 this morning (Mar 28) as a sandstorm settled over the capital. Though pollution levels have crept back gradually since Spring Festival, following one of the best winters Beijing has seen in five years, the off-the-scale measurements this morning have reignited widespread high-strung rhetoric about the city’s air quality.

Many of the panicked Beijingers posting photos of the soupy horizon and writing frantic messages in WeChat groups about local air quality were somewhat relieved to hear that the wildly high amounts of PM10 (bigger particulate matter than the more commonly reported on PM2.5 levels) could be attributed to the sandstorm.

Yann Boquillod, creator of the AirVisual air quality monitor, reassured fellow members of a pollution-centric WeChat group who were lobbing questions and concerns his way, writing: “The winds are supposed to blow the pollution [away], instead it brought sand. Wait for a few hours, it will be gone. Sandstorms don’t last very long, usually.”

PM10 is considered less unhealthy that its smaller PM2.5 counterpart given that though they can enter the lungs as you breathe, their larger size means that they do not pass into our bloodstream. Nevertheless, state media reports that PM2.5 levels reached 255 this morning, putting it into “very unhealthy” territory (according to the official Beijing Real-time Air Quality Index) but not wholly dissimilar to what we’ve experienced over the past few days.

For some context, Beijing has certainly seen worse, say during the stretch of red alert level smog in late 2016 and late 2015, or the “airpocalypse” of 2013.

Such ongoing concerns are compounded for parents like Sugandha Joshi, who hails from India and arrived in Beijing last year with her family. “Pollution was our biggest concern when we decided to move into Beijing, but we were so glad to find that throughout the winter the air was clean,” she says. However, now she is left to wonder “why the pollution is increasing with the arrival of spring? As a mother of a three-year-old who goes to a kindergarten, naturally, I am concerned.” 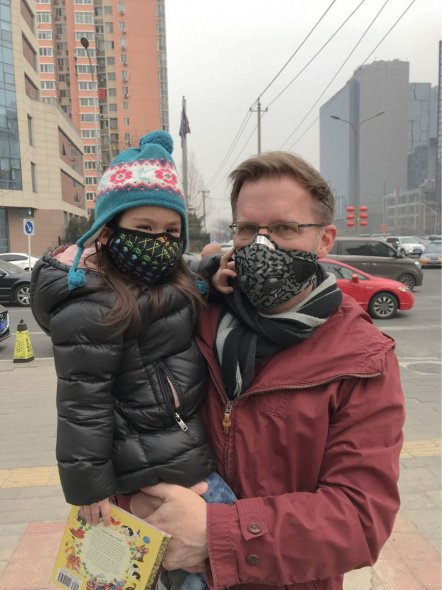 Geiger with his daughter. He tells the Beijinger that “My toddler has grown up thinking the sky is normally white.”

Another expat parent named Kevin Geiger, who has lived in Beijing since 2008, concurs, saying he is deeply worried about how the capital’s air quality is affecting his three-year-old daughter and his newborn. “My toddler has grown up thinking the sky is normally white,” he says. However, the recent resurgence in smog hasn’t prompted him to flee the capital just yet. “Simply pulling up and out is not so simple. Our lives and our children’s lives are here,” he says.

Those of us who, like Geiger, have decided to remain in Beijing despite its notorious haze can be heartened by one point raised by an air quality expert, who spoke to the Beijinger on the condition of anonymity. He said: “We estimate that we had 50 percent fewer emissions over this winter compared to last.” He went on to attribute that to actual progress, rather than flukes like better weather, saying: “The [recent] good weather was not the reason for low pollution because the weather was nearly the same as previous years.” Based on that, the prospects for Beijing’s air quality are still boding well overall, meaning the grim appearance of today’s skyline or the uptick of smog in recent weeks shouldn’t leave us to despair just yet.

Remember, if you’re concerned about high pollution levels, avoid exercising outside, stay in a low-polluted environment (via an air filter etc.), and wear a mask that works if you do need to venture outside. For articles on these and more, read our full air pollution coverage here.