When I moved to Singapore in 2010, I knew little about haze and air pollution in general; I’d moved from London where the air wasn’t all that great either.  In September 2010, we started to hear many residents of Singapore talking about the haze that would be coming our way soon, and sure enough  few weeks later the thick choking wood smoke drifted in off the coast.  After a little research, I learned that the farmers in Indonesia slash and burn their crops at this time of the year, because it is cheaper than buying the neccessary machinary to plow the fields in preparation for sowing next years crop.  Depending on which way the wind is blowing Singapore and Malaysia may or may not be resigned to two months of smokey air, irritated eyes, throat irritations and worse if you already have some sort of respirtory condition like asthma. So very early on in Singapore, I got into the habit of checking the air pollution levels (PSI) on the government website each morning before I would go running.  Below 100 PSI and I would run outside, above 100 and I would hit the treadmill.

Like many people in this part of the world, my job requires me to travel frequently within the Asia Pacific region, and I began to notice that many other cities also has bad air pollution; Hong Kong regulary has PSI reading above 150 (see left) and Beijing often has PSI readings above 200 and on occasions has had readings above 400 PSI.  To cut a long story short, I just did a lot of running on treadmills.

I’m happy to say that the air quality in Singapore normally only suffers for a couple of months a year and is for the most part, a wonderful place to live. In my second year here there were no haze problems at all, mainly due to the wind direction, however in year 3 it was really bad, and at that time I decided to try to find a solution becuase I simply couldn’t bare to take another step on a treadmill, bored out of my mind staring at MTV or listening to the same playlist or audiobook.  It was then that I remembered that whilst living in London, it wasn’t uncommon to see bicyle couriers and commuters wearing pollution masks to protect against the traffic fumes, so I started searching online to see if the same sort of mask could enable me to continue to run outside when the air pollution was bad and not impede my breathing too much.  That was when I discovered Respro’s website; I reviewed all of the products on their site and finally emailed customer services to make sure I was ordering the right mask; I needed them to understand two things:

They were very helpful and suggested that I try the Cinqro mask.  When the mask arrived (free shipping worldwide) I went out with the intent of doing a 12-15km run.  At first I was very pleased with how little the Cinqro impeded my breathing, until about 30 minutes into my run and the HEPA type filter inside the mask shell became saturated with the sweat pouring off my face (33 celcius 91 farenheit)  and it became very hard to beathe. I removed the mask, gave it a good squeeze and a shake to get most of the moisture out, put the mask back on and continued with my run, only to find that 15 minutes later the filter was sweat-logged again.  I reported the problem to Respro and they suggested that I try wearing a hat or headband to absorb the sweat which was a great solution and the Cinqro and I became unseparable during the rest of the haze season and whenever I traveled to one of the regions heavily polluted cities.

After about 2 weeks of wearing the Cinqro, the discolouration of the HEPA type filter was startling, it made me concerned about how much crap has been going into my lungs (and bloodstream) over the years.

A few months ago I was excited to see that the clever people a Respro had developed a new mask called the UltraLight; especially designed for hot and humid climates.  I immediately emailed them and ask if they would allow me to test the mask against the Cinqro in a truly hot and humid climate – and they agreed. 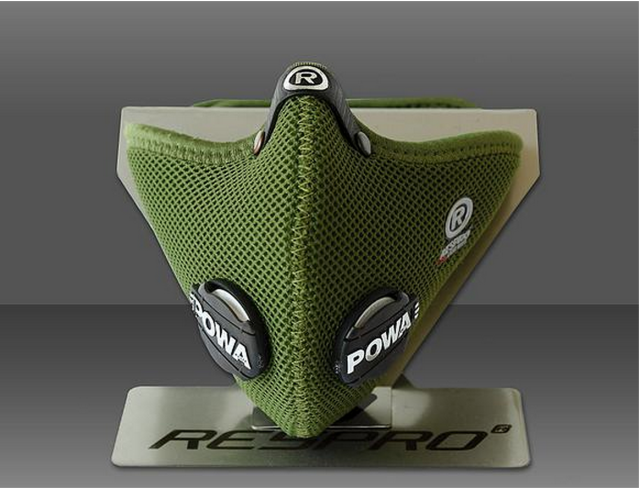 The main difference between the two masks is that the Cinqro mask shell is made out of a thin neoprene fabric and the UltraLight shell is made of a lighter, stretchy, breathable mesh that should be more suitable to this hot climate.  Both masks are fitted with Respro’s Powa Elite Valves that can be adjusted to increase/decrease max airflow, and a replaceable HEPA type sports filter.  As you can see in the pictures below, there is a very slight difference in the dry weight of the two masks;  The Cinqro weighs in at 45.4grams and the UltraLight at 39.7grams.

I decided that I would test the masks under my normal running conditions, because when I was looking to buy the Cinqro I wasn’t sure if you could really run in one of these things and a review like this would have been useful.  So I decided on two tests:

2.  A longer run on undulating hills

On the running track, I did a lap without a mask to provide a baseline for time and heart rate, and then I ran a lap at the same pace wearing each of the Masks to see if there was any difference.  The video of the track test is below.

The second test involved running up and over the highest point in the Singapore Botanical Gardens (not very high to be honest, Singapore is pretty flat) 5 times to get to 9k.  The aim was to assess if there is any difference in my ability to breath between these two masks and secondly, to see which one wicks moisture away better and which one is the most comfortable in this climate.  One important thing to point out at this stage is that the HEPA type filter is made out of Dynamic Activated Charcoal Cloth (DACC) which filters out the harmful pollutants in the air. Being made out of cloth means that you do need to try to keep it as dry possible when running or the filter eventually becomes saturated and then sucks inwards as you inhale, signifiacntly impeding airflow.  During the second test I was wearing a headband to absorb as much sweat as possible.

22 April 2015 wearing the Cinqro, running at an average pace of 4:51 per KM  (7:48 per mile), and with the Powa Elite valves set wide open breathing was easy even when running uphill.  But unfortunately at the 6KM point the HEPA type filter was becoming saturated and I started to notice a litte bit of back-suction as I inhaled which made breathing a little tougher, but I was able to complete the full 9km distance without having to remove the mask to wring-out the filter. 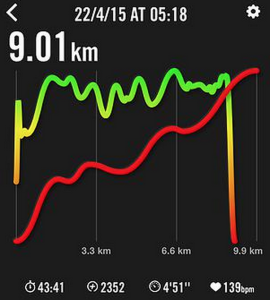 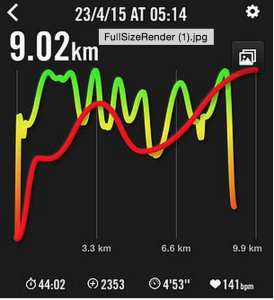 23 April 2015 wearing the UltraLight, running at an average pace of 4:53 (7:52 per mile) and with the Powa Elite valves set fully open, again breathing was very easy. The UltraLight fabric, does definitely allow air to permeate better than the Cinqro keeping my face a cooler, which also allowed the HEPA type filter to stay dryer because over the exact same course, at the same time of day, and the same temperature, the filter didn’t become saturated at any stage during the run.

I want to be clear, both of these masks are excellent and only differ in the fabric used in the mask shell; and if I were living in a more temperate part of the world, either one would suffice to keep my lungs clear of all the harmful crap sadly floating around our inner cities.  But in hot and humid Singapore the UltraLight is the winner, keeping my face cooler, the HEPA Type filter dryer and me comfortable.

Finally I would also like to point out that running with anything covering your mouth and nose will have an impact on your ability to breath, however once I saw the brown colouring of the HEPA type filter after only 8-10 runs, I knew that the slight compromise in breathing was worth it.  Another positive is that this minor restriction on my breathing has actually made me fitter!  So if you are a cyclist or runner, living and training in an inner city, do yourself a favour; check the air pollution levels regulary (www.aqicn.org) and look after your lungs, they’re kinda important.

3 Responses to REVIEW: Running in Haze