The smog-like conditions which brought a haze to swathes of Britain will become even more frequent as diesel car ownership soars, a leading pollution expert has warned.

Asthma, chronic bronchitis and emphysema sufferers complained of breathing problems, with air pollution reaching “high” levels in rural areas of the South-east and East Anglia. The pollution, which is forecast to remain until Friday, is a mix of traffic and power station emissions and dust from the Sahara.

Some schoolchildren in London were kept indoors at lunchtime to avoid them having asthma attacks and potentially life-long lung damage.

Professor Frank Kelly, a Government adviser, urged other schools in affected areas to do the same. “As a general response this is a good approach as children tend to run around outside and therefore breathe deeper,” he said.

Dr Keith Prowse, the honorary medical adviser to the British Lung Foundation, warned those who suffer from asthma to stay indoors and said going running would be “sheer stupidity” while pollution levels remained high. He added that the effects of the Saharan dust storm, which exacerbated the pollution, are likely to persist for days.

Mr Baker, deputy manager of MRC-PHE Centre for Environment and Health, warned that the growing popularity of diesel cars will push air pollution levels even higher. To make matters worse, diesel fumes have been found to have a role in causing cancer.

“The way things are going, pollution levels are likely to rise in the coming months and years. Traffic emissions are a big and growing problem in the UK because of the dramatic increase in diesel cars in the last few years,” Mr Baker told The Independent.

“This is one of the big challenges in the years to come for public health and, within the urban environment, it’s probably the biggest challenge.” 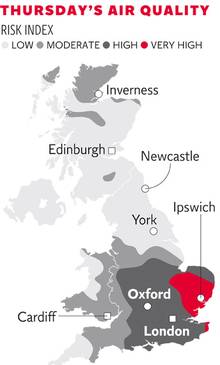 Sales of diesel cars recently overtook petrol engines, accounting for 51 per cent of new cars bought, compared to just 14 per cent in 2000. Drivers seek these vehicles because they are cheaper to run and emit less carbon dioxide, but the fine particles created by the engines pose huge health risks, he said. Pollution levels hit the highest ranking of 10 on the Department for Environment, Food and Rural Affair’s index in Norfolk and much of East Anglia. When pollution hits this level people are advised to “reduce physical exertion, particularly outdoors, especially if you experience symptoms such as sore eyes, cough or sore throat”.

“We had quite a few people saying that they hadn’t felt that good but they couldn’t put their finger on why because the weather had been nice. But they said it made sense when they woke up to see the high pollution levels,” she said.

Ms Browne said people suffering from chronic obstructive pulmonary diseases such as emphysema and bronchitis were the worst affected. They typically feel short of breath when the weather is very hot, windy, damp or wet – none of which was the case earlier this week.

“I don’t know if the full effects of the pollution will be felt for several days yet. I wouldn’t be surprised if people were more affected at the weekend because the inflammation can take time,” she added.

A spokesman for the environment department said that the pollution level today is likely to remain “high to moderate” across much of the South-east, Midlands and East Anglia but should ebb away by Friday.

Sahara dust: The causes of this week’s smog

This week’s pollution is caused by a combination of dust blown in from the Sahara, as well as harmful emissions, largely from car exhausts and power plants, from the UK and Europe. Light winds have allowed this cocktail of natural and manmade pollutants to linger in the skies above the country.

The haze contains pollutants such as carbon monoxide, nitrogen dioxide and ozone. It can cause runny eyes and noses, as well as coughs and sore throats, but the effects can be more serious among the very young, the elderly and those with heart or lung problems. It can also be carcinogenic. The pollution has left a layer of orange dust on cars as the rain clears it from the upper atmosphere and brings it down to lower levels.

The Defra Daily Air Quality Index, which hit the top level of 10 yesterday in parts of East Anglia and the South-east, is calculated by measuring pollutants – ozone, nitrogen dioxide, sulphur dioxide and tiny particulate matter, known as PM10 and PM2.5.

Each pollutant is measured in a different way. For example, ozone is measured by shining UV light through air. The ozone will reduce the amount of UV light getting through, which tells us how much ozone is in the air.