South Korea’s health ministry said on Tuesday a patient infected with the Middle East Respiratory Syndrome (MERS) virus has died, becoming the seventh fatality in an outbreak that began in May.

The ministry said there were eight new cases of MERS, bringing the total to 95 but falling from 23 daily new cases reported on Monday.

South Korean President Park Geun-hye said the progress of MERS, which has been spreading in South Korea since last month when a businessman brought it home from a Middle East trip, had to be halted, a day after authorities began using mobile phones to trace people who violate quarantine.

Most of the disease’s approximately 445 fatalities have been in the Middle East but memories are fresh in Asia of Severe Acute Respiratory Syndrome (SARS), which emerged in 2002-2003 and killed about 800 people worldwide.

MERS is caused by a coronavirus from the same family as the one that caused SARS.

The World Health Organisation (WHO) has not recommended travel restrictions and its director-general, Margaret Chan, said she believed South Korea would be able to control the spread. But alarm is growing and about 25,000 people cancelled trips to South Korea between Jun 5 and Jun 7, the Korean Tourism Organisation said. 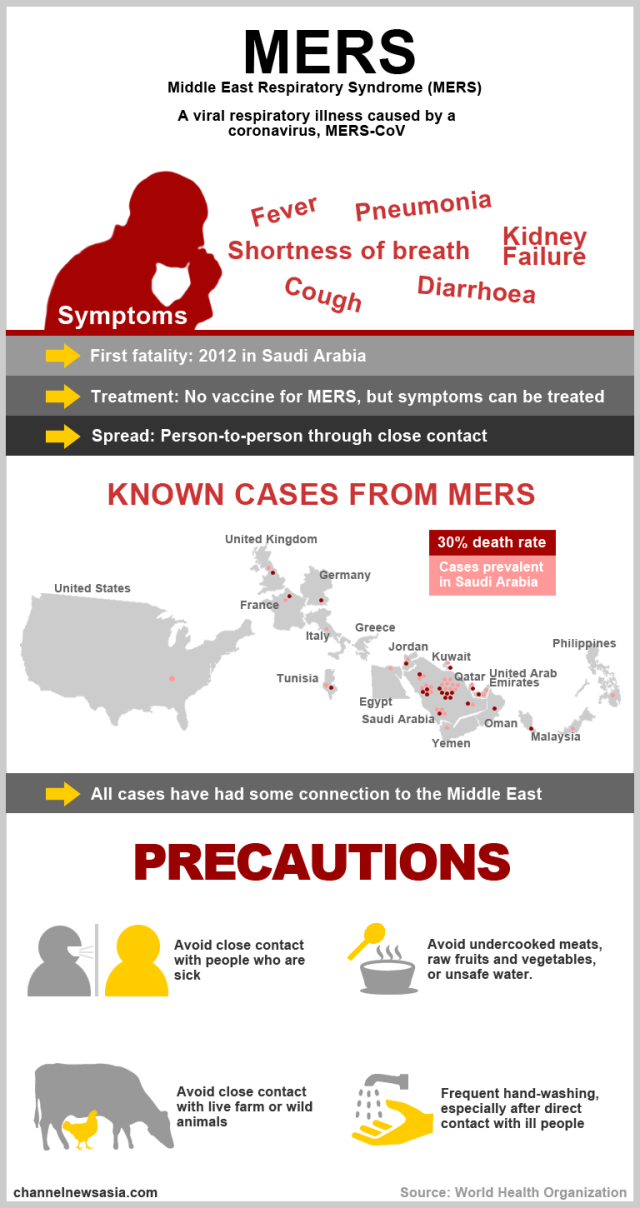 Hong Kong raised its response level to “serious”, from “alert” on its three-level system. The third is “emergency”. The “serious” level means tighter controls at points of entry to Hong Kong, greater coordination between authorities and swifter test results for suspected cases.

“The Department of Health advises the public to avoid unnecessary travel to Korea, in particular, those with chronic illnesses,” Hong Kong’s Centre for Health Protection said. “Travellers in Korea and the Middle-East should avoid unnecessary visit to healthcare facilities.”

All known South Korean infections have taken place in health facilities, where it is common for family and friends to make lengthy visits, sometimes staying around the clock to care for a sick relative.

Malaysia has advised its nationals to avoid South Korea while Singapore has postponed or cancelled school trips.

In China, airports stepped up monitoring and authorities have asked airlines to report any passengers with high temperatures. Vietnam and Cambodia ordered heightened screening of arrivals from South Korea.

South Korea has closed nearly 2,000 schools and put about 2,500 people, who may have had contact with MERS patients, under quarantine, some in hospitals but most at home.

“The focus of our effort is to completely verify the route of infection and completely cut off the links and to stop all additional contacts,” Park said at the health ministry.

The outbreak is adding pressure for an interest rate cut in South Korea, possibly as soon as the central bank’s next policy meeting this week.

“The effect from MERS on private consumption cannot be overlooked as spending and tourism are quickly shrinking,” Park said during a visit to the MERS response headquarters. “Minimising the economic impact of the disease and overcoming it has to be part of eradicating the MERS outbreak.”

The outbreak could inflict a US$2 billion hit on South Korea, according to Barclays, or 0.14 per cent of its forecast for 2015 output, with hotels and restaurants among sectors most affected.

Despite the new cases, the Health Ministry said the first big wave of infections traced to a hospital in the city of Pyeongtaek, which has been shut, seemed to have run its course, with no new infections among the latest batch.

A team of WHO experts is due to evaluate the response to the outbreak and advise on further measures.