Where is the world’s most polluted city?

Outdoor air pollution kills 3.3 million people, mostly in cities, every year. That’s more than HIV, malaria and influenza combined – yet the sparse coverage of official data means many cities are not even monitored 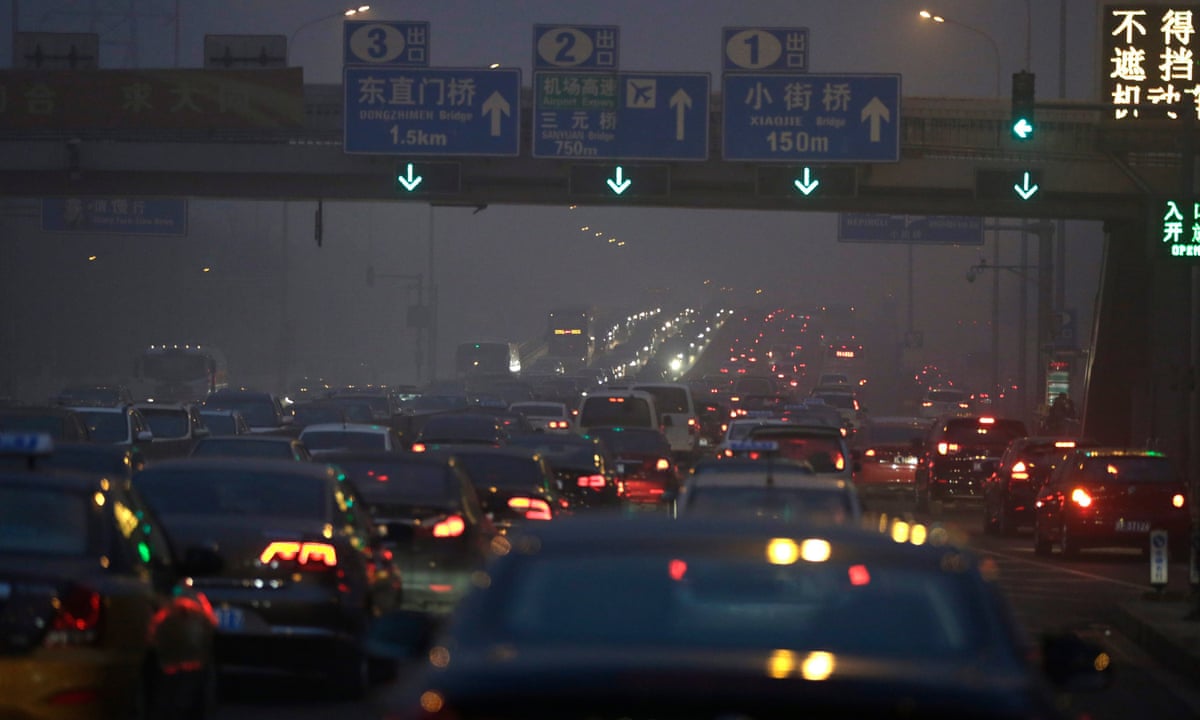 Every day, hundreds of millions of people step outside into an environment that has become unsafe for human survival. Outdoor air pollution kills 3.3 million people every year, mostly in cities; more than HIV, malaria and influenza combined. But the search for this insidious mass killer reveals something astonishing. As the governments of more than 190 nations gather in Paris to discuss a possible new global agreement on climate change, not only don’t we know where it kills the most, in many places we aren’t even looking.

It is thought that as many as 1.6 million Chinese are killed by breathing bad air every year. Beijing, in particular, is synonymous with the problem. Last weekend, the US embassy there reported the level of PM2.5 at 391 micrograms per cubic metre (µg/m3) and China’s environmental protection agency recommended residents stay indoors. And yet, the most definitive database of PM2.5 pollution, produced by the World Health Organisation (WHO) earlier this year, places only one Chinese city, Lanzhou, in the worst 50. 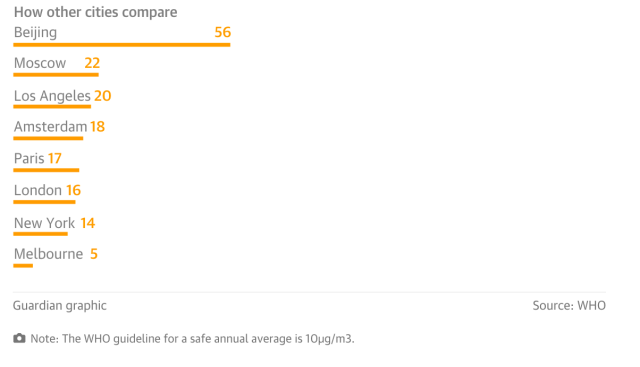 The top of this list is dominated by the ultra-miasmic cities of India and Pakistan and shaded at the top by Delhi. On an average day, the residents of the Indian capital breathe air fouled by fine particles at a concentration of 153µg/m3. This is close to three times the Beijing mean and 15 times the WHO guideline of 10µg/m3.

In Delhi, the fumes from 8 million cars, small-scale diesel electricity generators and surrounding coal plants have damaged the lung function of half the city’s 4.4 million children so severely that they will never fully recover. There is no escaping this chemical haze. Doctors have begun prescribing that patients simply leave the city. This year, Delhi’s chief minister spent time in a rehabilitation clinic in the country’s south, allowing his lungs to recover.

Hospitals don’t record air pollution as a cause of death. It manifests through an increase in already prevalent human heart and lung diseases. Therefore its impact can only be assessed by taking samples directly from the air. 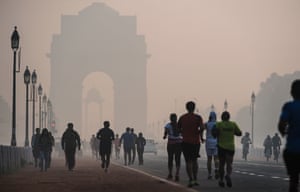 The WHO data has lead many, including the Guardian, to name Delhi as the“world’s most polluted city”. But the basis for this is flimsy. The WHO takes information from monitoring stations in more than 1,600 cities on every populated continent. This sounds comprehensive but, according to at least one count, covers less than a third of cities of over 100,000 people. Not all very polluted cities are big, although it helps.

There may be other cities that are not measured. It’s hard to know what’s going on in West Africa and the Middle East

The database is based on voluntary monitoring by governments. A spokeswoman for the WHO said the UN organisation cannot compare or rank cities because many do not have the resources or political will to set up a monitoring system. Gary Fuller, an air pollution expert at Kings College, said continent-sized blank spots made it impossible to know where people were suffering the most.

“When we compare air pollution in cities, we only look at those with measurements,” he said. “This focuses our attention on big cities and the developed world. Initial attempts to measure air pollution from satellites have revealed more areas of the world with dense populations and high air pollution.”

Of the 1,622 cities covered in the WHO data, 510 are in two countries – the US and Canada. Just 16 are in Africa (half of these in relatively wealthy South Africa and Egypt). That’s 0.75% of the monitoring for 15% of the world’s population, an increasing number of whom live in high-risk cities. Latin America’s 604 million people are among the most heavily urbanised on earth. Their air is monitored in 109 cities. Across the Middle East, data is collected in just 24 cities. 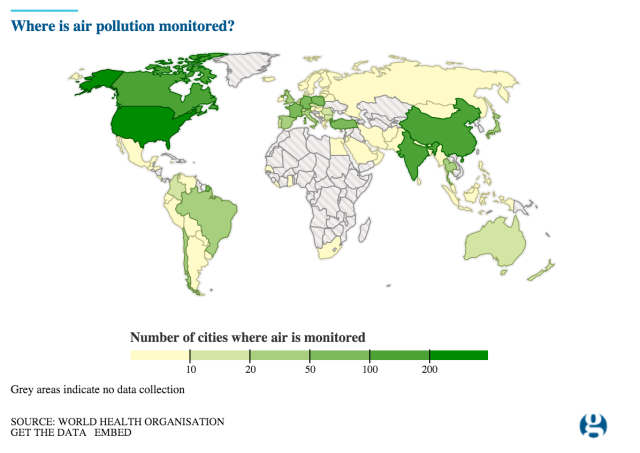 A vast swathe of humanity is unknowingly breathing poison on a daily basis. The implication is profound, because without knowing the air is bad, nothing will be done to fix it.

“Cities that collect and disseminate information on outdoor air quality need to be praised for their action. This is the first crucial step to identify if there is an outdoor air pollution problem and to begin to take corrective action,” said the WHO spokeswoman.

Professor Randall Martin is the leader of the Spartan project, which is working to improve satellite observations that might identify high risk cities.

“I think Delhi is getting attention because it is being measured. There may be other cities lurking out there that are just not being measured. It’s certainly hard to know what’s going on in places such as West Africa and the Middle East. There are vast areas of ground where there is virtually no monitoring,” he said.

One early satellite study found that 96% of West Africans live above the WHO guidelines. The human-caused fumes mix with a strong background of Saharan dust and sea salt, all of which, said Martin, are dangerous to lung function. Earlier this year, in the Nigerian capital of Lagos, a regular, persistent smog began hanging over the city.

“Though the people are aware that the situation is not healthy, they feel it’s not yet dangerous, hence there’s no pressure on the government to remedy the situation,” said Udeh Chiagozie, a Nigerian youth ambassador for the UN environment programme’s Eco-Generation scheme.

“You find lots of cars that are not road-worthy plying the roads, generators as well as industries, especially oil and gas, that contribute to the city’s emissions. It shouldn’t be a surprise if the smog continues to happen,” said Chiagozie.

A five-month study in Lagos found five out of eight sites exceeded Delhi’s annual PM2.5 count. Across the time period some locations came close to doubling the Indian capital’s average pollution. This is one of the most comprehensive air quality surveys to have been conducted in Lagos, though it is not enough to form a definitive annual average.

Another concern is that some neighbourhoods slip past city-wide averages. The Mongolian capital of Ulaanbaatar lies in a natural basin, and temperature inversions of dry, cold desert air cause pollution to pool above the city. The city’s WHO average is 68µg/m3, making it bad but not terrible. But in 2012, the World Bank measured the poisonous grey puddle above ger (yurt) neighbourhoods where 175,000 families have set up traditional tents and burn coal for warmth. Here, pollution averages between 200 to 350µg/m3 – far surpassing Delhi.

The silver lining to Delhi’s smog is that the stigma is forcing politicians to act. The government is seeking to introduce tougher regulations on vehicle makers and build a bypass around the city. In China, a recent poll found 94% of adults believe air pollution is a problem the government should prioritise. As a result, substantial action has already been taken. The Beijing government has launched a programme of alternate driving days based on licence plate numbers and mass coal plant shutdowns are under way.

Not the least of China’s responses has been the development of mass monitoring. Hourly warning systems have lead to commonplace photographs of Chinese pedestrians wearing masks to protect themselves on days when an alert is sounded.

PM2.5 is not the only form of air pollution – in fact there are many – but it is responsible for the greatest number of deaths worldwide. Another notable killer is NO2 – now notorious because of VW’s scandalous attempt to rig its emissions reporting. In Europe, high-NO2 emitting diesel cars became prevalent after a huge subsidy programme. In London, this pollutant kills more people than PM2.5. In the city centre, where the iconic (diesel-powered) red buses queue, Oxford Street has been named the most polluted street on earth when it comes to this particular nasty.

Again, when this information was made public, Londoners were shocked. Plans are now in place to develop an ultra-low emission zone in the UK capital. New red buses are now electric-diesel hybrids. One small environmental NGO used air pollution data against the UK government in the European Court of Justice, where it was sanctioned for its failure to protect citizens in 40 of the country’s 43 urban zones.

Residents of hundreds, perhaps thousands, of cities cannot make these demands because the necessary measurements are not recorded by their governments.

Source: Where is the world’s most polluted city? | Cities | The Guardian