Air pollution will kill 200,000 people in the UK in the next five years

As Greenpeace stages protests in London, we reveal the 16 ​regions around the UK where lives lost to pollution are on the increase

Greenpeace protesters scaled 17 of London’s most famous statues yesterday to raise public awareness of the dangers posed by air pollution .

By fitting face masks to Nelson, Queen Victoria and Oliver Cromwell, the environmental campaign group hoped to make the point that London’s atmosphere is toxic and breaches limits on air pollution set by the World Health Organisation , killing 10,000 people every year.

“The next mayor should begin a consultation on a Clean Air Zone immediately after the election.”

The protest comes soon after news that environmental law firm Client Earth are set to take the government to court for the second time because the UK’s air pollution breaks EU law.

Experts say that air pollution will kill 200,000 over the next five years.

Last year, a report published by the Royal College of Physicians showed that, across the UK, 40,000 deaths a year can be attributed to air pollution.

And while air quality across the country as a whole is improving, figures analysed by The New Day’s data unit show that in 16 regions, the number of deaths caused by pollution went up between 2010 and 2013, the latest statistics available.

According to the Royal College of Physicians, air pollution has an “adverse effect on the development of the fetus” and is linked to “asthma, diabetes, dementia, obesity and cancer”.

The report also noted “compelling new evidence that air pollution is associated with new onset asthma in children and adults”.

Dr Samantha Walker is Director of Research and Policy at Asthma UK. She said: “We’ve heard anecdotally from people with asthma who find air pollution makes their asthma worse – particularly in London.”

Because the UK is in breach of EU directives on air quality, last year environmental law firm Client Earth were able to take the government to the UK Supreme Court .

In April 2015, judges ruled: “The government should be left in no doubt as to the need for immediate action to address this issue.”

Previously, government policy had aimed to bring levels of pollution in British cities to legal levels by 2030 – a delay which could have killed 600,000 people.

In response to the ruling, the government has instigated a Clean Air Zones policy in Birmingham, Leeds, Nottingham, Derby and Southampton, due to be introduced by 2020.

In London, where air quality is the responsibility of the Mayor, Boris Johnson has announced the implementation of a “ultra-low emission zone” to bring air quality within legal limits by 2025. 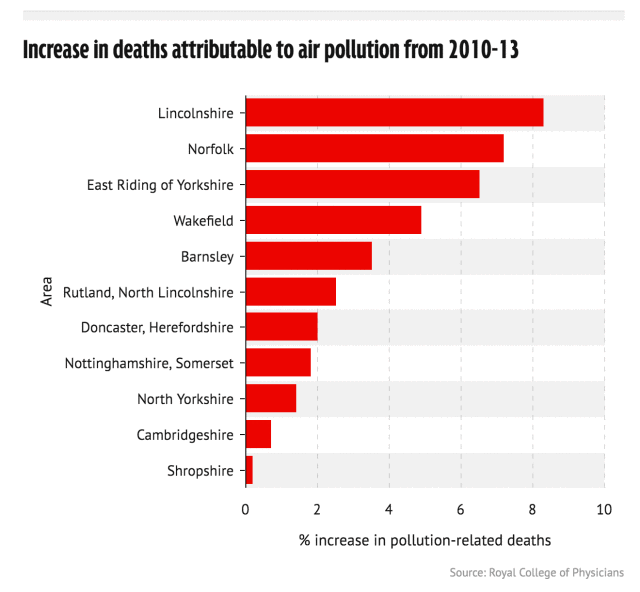 However Client Earth argues that the UK should not have to wait another five or 10 years for air improvement.

Their lead clean air lawyer Alan Andrews told The New Day : “The government was ordered to produce plans that would get air pollution down to legal limits as soon as possible.

“The plans it produced were an insult to the tens of thousands of people being made sick and dying from toxic air. It didn’t consider the strong measures needed to get the worst polluting diesel vehicles out of our town and city centres.

“As the government still can’t be trusted to deal with air pollution, we are taking them back to court to get the urgent action that’s needed.”

A Defra spokesperson said: “Between 2005 and 2013 emissions of nitrogen oxides have fallen by 38% and particulate matter has reduced by more than 16%.

“Tackling air pollution is a priority for this Government and we have set out how we will improve the UK’s air quality through a new programme of Clean Air Zones, which alongside national action and continued investment in clean technologies will create cleaner, healthier air for all.”

Dr. Matthew Loxham is a toxicologist and research fellow at Southampton University

“UK air quality is improving at a very slow pace, and is still above WHO and EU limits. Even then, we know that these limits do not represent safe levels.

“At the same time, better scientific research and detection methods have shown that air pollution is a much bigger problem that we had hitherto realised.

“A decade ago, scientists estimated that one million people worldwide die annually due to air pollution. Now that figure is three million.

“In the UK, we have a particular problem with the particulates (polluting particles) and nitrogen oxides (aka NOx) emitted by diesel vehicles including buses, HGVs, taxis and private cars.

“We were encouraged to buy diesel cars because they were supposed to be more environmentally friendly. The number of diesel cars went up from 10% to 40%, but actually the benefits for climate change are negligible.

“To save lives, we need urgently to reduce diesel usage, try to separate people from traffic and encourage policies like park and ride.

“The Met Office now provide air quality forecasts, and give advice to the public about what to do when it is particularly bad in their region.”

Source: Air pollution will kill 200,000 people in the UK in the next five years – Mirror Online