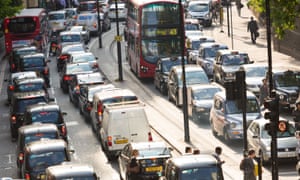 Diesel vehicles must be banned from London if the UK is to meet its air pollution targets, a thinktank warned on Monday.

Cars, vans and buses using diesel fuel are the leading cause of air pollution in the capital, and although steps are being taken to discourage their use, through the congestion charge and clean air zones, this will not be enough to clear the air, theInstitute for Public Policy Research (IPPR) found in a new report.

The number of diesel vehicles on the capital’s streets has been increasing in recent years, according to research published earlier this year.

Any phase-out of the vehicles will be controversial, as many drivers bought diesel cars in the belief that they were better for the environment. Diesel engines produce less carbon dioxide than their petrol equivalents, but they also produce nitrogen oxides and small particles, which pollute the air and can cause breathing difficulties in vulnerable people, such as the elderly and the young, and people with existing respiratory conditions.

More than 9,000 premature deaths a year are caused by polluted air in the capital.

While applauding the measures announced in recent weeks by Sadiq Khan, the recently elected Labour mayor of London, IPPR said it was likely that much more drastic steps would need to be taken if the capital is to meet clean air regulations set out by the EU.

“London’s air is both lethal and illegal,” said Harry Quilter-Pinner, researcher at IPPR. “This is a public health crisis and it should be ignored no longer. Only bold action will make the capital’s air safe to breathe again.”

He added: “[Our] analysis suggests Khan will ultimately need to phase out diesel cars and buses in order to reach legal compliance.”

This would require the cooperation of national government, as the mayor lacks the power to achieve this result alone. The report, entitled Lethal and Illegal, found that under the current air pollution regime, London would fail to meet its legal requirements on air quality until 2025 or later. It is the only area of the UK forecast to take so long to meet air quality standards.

Phasing out diesel vehicles from London’s street would “not be easy” but would “not be impossible”, the thinktank said. The report’s authors called for a new Clean Air Act to be passed by parliament, to counter the uncertainty over whether the UK will adhere to EU air quality regulations after Brexit.

Khan did not say whether he would seek to ban diesel vehicles altogether, but stressed his intention to clean up the capital’s air. “Protecting Londoners from our toxic filthy air is an issue of life and death,” he said. “Rather than turn a blind eye to this growing health crisis, it is high time ministers faced up to their responsibilities.”

He said he was conducting a public consultation on air pollution, and urged people to make their views known.

The analysis was backed by Greenpeace and ClientEarth, the activist charity which has taken the government to court on the issue.

Alan Andrews, lawyer for ClientEarth, said: “An ambitious and bold Clean Air Act is needed for the whole country. It should phase out diesel across the country and accelerate the shift to zero emission transport. This would help our cities clean up their air and achieve legal limits as soon as possible.”

Barbara Stoll, senior campaigner at Greenpeace, added: “The writing’s on the wall for diesel. We need vital leadership from the government in phasing out diesel cars over the coming years. London can’t stand alone in this fight. We need urgent action from Theresa May and her new team to clean up the car industry, who’ve got away with polluting our streets for too long, and help people make the switch [away from diesel vehicles].”