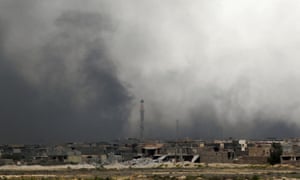 Air pollution caused by war may be a major factor in the numbers of birth defects and cancers being reported in Iraq and other war zones, a study has suggested.

Human exposure to heavy metals and neurotoxicants from the explosion of bombs, bullets, and other ammunition affects not only those directly targeted by bombardments but also troops and people living near military bases, according to research published in the scientific journal Environmental Monitoring and Assessment.

Mozhgan Savabieasfahani, an Iranian toxicologist and lead author of the report, said “alarming” levels of lead were found in the “baby” or “deciduous” teeth of Iraqi children with birth defects, compared with similar teeth donated from Lebanese and Iranian children.

“Deciduous teeth from Iraqi children with birth defects had remarkably higher levels of Pb [lead],” she said during a recent visit to London. “Two Iraqi teeth had four times more Pb, and one tooth had as much as 50 times more Pb than samples from Lebanon and Iran.”

The study is important, because there has been scant research on how years of warfare across the Middle East have impacted local civilian populations, and data is hard to collect.

However, the few investigations that have been conducted suggest sharp increases in congenital birth defects, premature births, miscarriages and leukaemia cases in Iraq and other war zones, a finding supported by interviews with doctors.

The study supports claims that the long-term health of many thousands of former US soldiers was devastated by air pollution caused by the unregulated burning of huge volumes of military waste in hundreds of open air “burn pits” during the Iraq war.

More than 85,000 US Iraq war veterans who have signed a government registerhave been diagnosed with respiratory and breathing problems, cancers, neurological diseases, depression and emphysema since returning from Iraq. About half have stated that they were exposed to the burn pits.

The toll among soldiers has been documented in testimonies given to the US Department of Veterans Affairs and in a new book, The Burn Pits, based on interviews with 500 veterans exposed to pollution. They record how foam, electronics, metal cans, rubber tyres, ammunition, explosives, human faeces, animal carcasses, batteries, asbestos insulation and heavy metal waste were doused in jet fuel and set on fire during the Iraq war. 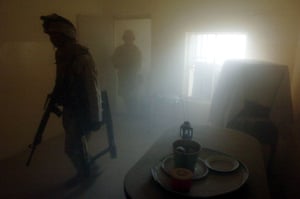 “There were 270 of these pits burning 24/7, sometimes for years. Some are still burning today. These materials converged in a toxic plume that hovered over bases, and seeped into soldiers’ sleeping and working quarters, which were often a mile or less away,” said former US Marine and Army sergeant Joseph Hickman, author of the book.

“The vets told me that they were told the smoke was a nuisance but not a hazard. Some of the pits were worse than others. One, at Balad air base, covered 10 acres and burned 50 tonnes of trash a day. There were no regulations on what could be burned, anything that was considered trash went in there.”

An air sampling study by the US Department of Defense at Balad base in 2008 detected high levels of particulate matter, polycyclic aromatic hydrocarbons, volatile organic compounds, as well as Agent Orange-type dioxins and furans.

Thousands of tonnes of herbicides containing deadly dioxins were dropped on Vietnamese and Laotian forests in the 1970s, but the health effects on veterans and local communties were not officially admitted for 27 years.

“The open-air bonfires [in Iraq] – which violated not only Environmental Protection Agency air quality standards, but the Pentagon’s own regulations – were supposed to be used only as a temporary measure, until incinerators could be put in place. But they continued to operate throughout most of these wars, with a number still running as late as 2015,” said Hickman.

Evidence of the pollution effects on Iraqi communities is barely known because little research has been done. But Savabieasfahani said the toxicological effects of the air pollution would inevitably have been damaging.

“We know that they burned pesticides, pharmaceuticals, chemicals, solvents, medical waste and toxic heavy metals. All are extremely polluting to the environment. Thick black clouds of pollution were common, day and night,” she said.

“I was alerted to the pollution when living close to Basra when the invasion started and several women at the university where I was teaching spontaneously aborted.

“But getting tissue samples out of Iraq has proved nearly impossible and little research into the pollution’s effect on people living close to the burn pits has been conducted.”

“We found very high levels of mercury, lead, titanium and various toxic metals in hair of children and parents of children with disorders or severe birth defects, showing metal contamination has happened since 2003 – with increased disorders and defects.”

She added: “We could see that when the bombing started so did the birth defects. In May 2010, 15% of 547 babies born at the [Basra] hospital had severe birth defects. This is in contrast to 2% to 4% that is normal,” she said.

Later in 2010, rates of babies being born with birth defects were as high as 30%, said Savabieasfahani. “Pollution all ends up in the body. People were breathing in high levels. Major damage was being done to people,” she said.

The full scale of the pollution from years of war in the region may never be known.