Diesel cars by Fiat, Suzuki and Renault among makers emitting up to fifteen times European standard for nitrogen oxide 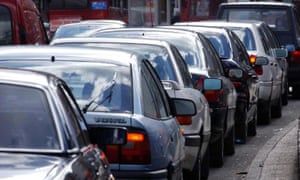 A year on from the “Dieselgate” scandal that engulfed Volkswagen, damning new research reveals that all major diesel car brands, including Fiat, Vauxhall and Suzuki, are selling models that emit far higher levels of pollution than the shamed German carmaker.

The car industry has faced fierce scrutiny since the US government ordered Volkswagen to recall almost 500,000 cars in 2015 after discovering it had installed illegal software on its diesel vehicles to cheat emissions tests. But a new in-depth study by campaign group Transport & Environment (T&E) found not one brand complies with the latest “Euro 6” air pollution limits when driven on the road and that Volkswagen is far from being the worst offender.

“We’ve had this focus on Volkswagen as a ‘dirty carmaker’ but when you look at the emissions of other manufacturers you find there are no really clean carmakers,” says Greg Archer, clean vehicles director at T&E. “Volkswagen is not the carmaker producing the diesel cars with highest nitrogen oxides emissions and the failure to investigate other companies brings disgrace on the European regulatory system.”

T&E analysed emissions test data from around 230 diesel car models to rank the worst performing car brands based on their emissions in real-world driving conditions. Fiat and Suzuki (which use Fiat engines) top the list with their newest diesels, designed to meet Euro 6 requirements, spewing out 15 times the NOx limit; while Renault-Nissan vehicle emissions were judged to be more than 14 times higher. General Motors’ brands Opel-Vauxhall also fared badly with emissions found to be 10 times higher than permitted levels.

The new models are not breaking the law and the manufacturers say they comply with all current regulations. But cars are are able to be on the road because of the difference between emissions produced in lab tests and real on-road driving situations.

Since September 2015 new diesel cars have had to comply with a new European exhaust emissions standard called Euro 6 which set a limit of 0.08g per km. The new rules heralded a significant reduction from the previous “Euro 5” standard which allowed 0.18g per km. NOx pollution is considered to be a serious public health risk, causing the early deaths of 23,500 people a year in the UK alone.

The report – which also drew on data from investigations conducted by the British, French and German governments, as well as a large public database – surprisingly found Volkswagen to be selling among the cleanest diesel vehicles under the Euro 6 rules. Archer says this was not, however, evidence of the carmaker “learning its lesson” as these models were available before last year’s scandal broke. The Dieselgate engines were mostly of the previous Euro 5 era which were sold between 2011 and 2015.

T&E estimates that there are 29m “dirty” diesel cars and vans on Europe’s roads – a number that is still growing – with 4.3m of them being driven in the UK. The group classify a car as “dirty” if emissions are more than three times over the relevant NOx limit. Archer argues that a mass recall of dirty Euro 5 and 6 vehicles is required given the average lifetime of a car is 17 years. “Software upgrades could easily be implemented to ensure the exhaust systems operate in normal driving conditions as the law clearly states,” heargues.

Last month French investigators said they had found that a large number of diesel cars emitted much higher levels of pollution than their European manufacturers claim. According to the independent committee’s report, around a third of the 86 diesel vehicles tested produced levels of NOx well above European limits. The results echo similar findings in tests by the UK’s Department for Transport.

In a statement Fiat Chrysler Automobiles (FCA) said an internal review had confirmed that its diesel engine applications complied with emissions regulation. It added: “The EU is working towards the adoption of a new testing procedure to bring it closer to what one would expect under real driving conditions. FCA supports these efforts and welcomes the introduction of new regulations which should provide clarity for customers and the industry.”

Mike Hawes, chief executive of the UK trade body the Society of Motor Manufacturers and Traders (SMMT) said the tests conducted by various governments had consistently shown the tested vehicles to be legal. “The differences between official laboratory tests and those performed in the ‘real world’ are well known, and industry acknowledges the need for fundamental reform,” he added.

A spokesperson for Hyndai said the company meets all current regulatory standards: “New Euro 6 cars are built using the best available technology to comply with these regulations and they produce less NOx emissions than their predecessors. Hyundai Motor takes environmental compliance extremely seriously and is committed to meeting forthcoming
new targets and to significantly improving the environmental performance of its vehicles.”

Renault, Opel/Vauxhall, Mercedes-Benz, Land Rover and Nissan did not respond to requests for comment on the report.

The EU has tightened emissions regulations and from September 2017 diesels that emit more than double the lab limit for NOx on the road will be banned from sale. Hawes added that next year’s introduction of an on-road Real Driving Emissions (RDE) test, as well as tougher lab tests, would help to provide consumers with the “reassurance that manufacturers are delivering on air quality”.