Authorities from Indonesia, Malaysia and Singapore have rejected recent research on the number of early deaths caused by last year’s fires 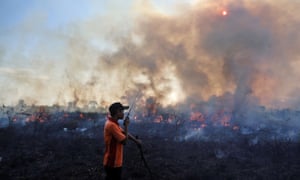 Last year’s fires in Sumatra and the Indonesian part of Borneo were the worst since 1997, burning about 261,000 hectares of forests and peatland and sending haze across the region for weeks. Many were deliberately set by companies to clear land for palm oil and pulpwood plantations.

The study in the journal Environmental Research Letters by Harvard and Columbia researchers estimated the amount of health-threatening fine particles, often referred to as PM2.5, released by the fires that burned from July to October and tracked their spread across south-east Asia using satellite observations.

In Indonesia, a spokesman for the country’s disaster mitigation agency said the research “could be baseless or they have the wrong information”. Indonesia officially counted 24 deaths from the haze including people killed fighting the fires.

Singapore’s Ministry of Health said short-term exposure to haze will generally not cause serious health problems. The study was “not reflective of the actual situation”, it said, and the overall death rate hadn’t changed last year.

In Malaysia, health minister Subramaniam Sathasivam said officials are still studying the research, which is “computer-generated, not based on hard data”. “People have died but to what extent the haze contributed to it, it’s hard to say,” he said. “If an 80-year-old fellow with high blood pressure, diabetes, heart problem and exposure to haze died, what did he die of? This is a hell of a difficult question to answer.”

The dry season fires are an annual irritant in Indonesia’s relations with its neighbours Singapore and Malaysia and the finding of a huge public health burden has the potential to worsen those strains. The 2015 burning season, which was worsened by El Niño’s dry conditions, also tainted Indonesia’s reputation globally by releasing a vast amount of atmosphere-warming carbon.

The Indonesian government has stepped up efforts to prosecute companies and individuals who set fires and also strengthened its fire-fighting response. This year’s fires have affected a smaller area in large part due to unseasonal rains.

Jamal Hisham Hashim, research fellow with the International Institute for Global Health in Kuala Lumpur, Malaysia, said governments should not dismiss the study even if the estimated deaths are arguable.

He said decades of air pollution research that followed London’s killer smog in 1952 has established the relationship between fine particulate matter and premature deaths, particularly in people with existing respiratory and cardiovascular diseases.

“The pollution level that occurred during the haze is severe enough to cause premature deaths. That is indisputable,” he said. “The study is a wake-up call. We need to be shaken; we have become too complacent with the haze.”

Joel Schwartz, an author of the study who is regarded by his peers as one of the world’s top experts on the health effects of air pollution, said authorities in the affected countries have not offered any details of how they reached conclusions critical of the study.

During the haze, Malaysia suffered air pollution at 10 times the level that the World Health Organization says causes premature deaths, he said, while Singapore’s claim that short-term exposure does not have serious effects is factually incorrect.
The Singaporean statement that its death rate was unchanged from 2014 did not demonstrate anything, Schwartz said, due to a worldwide trend for declining mortality. The study’s premise is that deaths are higher than what they would be without the haze rather than a comparison to a particular year, he said.

Separately, Singapore’s health ministry did not respond to a question on why heart disease and pneumonia, both of which can be brought to fatal conclusion by fine particle exposure, had increased as a percentage of deaths in 2015.

Malaysia, meanwhile, does not measure PM2.5 in its air pollution index but has been planning to from next year.

Half a dozen scientists with expertise in air pollution who reviewed the study for the Associated Press said its methodology was sound and its conclusions reasonable. Some cautioned that the estimates of 91,600 deaths in Indonesia, another 6,500 in Malaysia and 2,200 in Singapore are invariably uncertain because aspects of the modelling rely on assumptions and the actual figures could be higher or lower.

The study considered only the health impact on adults and restricts itself to the effects of fine particles rather than all toxins that would be in the smoke.

Philip Hopke, director of the Center for Air Resources Engineering and Science at New York state’s Clarkson University, said air pollution studies have to overcome several challenges because “no one who gets sick or dies comes to the doctor or hospital with a clear label that says airborne particles or ozone did this.” Another problem is the studies typically assume that fine particles are the sole cause of illness or death but smoke from fires contains ozone and a variety of volatile compounds that would also affect health.

“A major event like occurred here is extremely likely to have caused adverse health outcomes in terms of both sickness and deaths,” he said.