More than 1 million people died from dirty air in one year, according to World Health Organisation 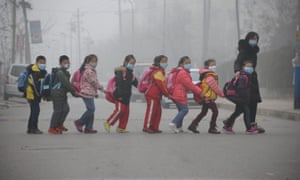 China is the world’s deadliest country for outdoor air pollution, according to analysis by the World Health Organisation (WHO).

The UN agency has previously warned that tiny particulates from cars, power plants and other sources are killing 3 million people worldwide each year.

For the first time the WHO has broken down that figure to a country-by-country level. It reveals that of the worst three nations, more than 1 million people died from dirty air in China in 2012, at least 600,000 in India and more than 140,000 in Russia.

Maria Neria, director of the WHO’s public health and the environment department, told the Guardian: “Countries are confronted with the reality of better data. Now we have the figures of how many citizens are dying from air pollution. What we are learning is, this is very bad. Now there are no excuses for not taking action.”

Gavin Shaddick, who led the international team that put together the data, said: “Globally, air pollution presents a major risk to public health and a substantial number of lives could be saved if levels of air pollution were reduced.”

Sixteen scientists from eight international institutions worked with WHO on the analysis, which gathered data from 3,000 locations, using pollution monitors on the ground, modelling and satellite readings.

They looked at exposure to tiny particulates 2.5 microns in size, known as PM2.5s, which penetrate the lungs and are the air pollutant most strongly associated with an increased risk of death. “The real driver of ill health is ultra-fine particles, 2.5s – they have the ability to permeate the membrane of the lungs and enter our blood system,” said Shaddick, who is based at the University of Bath. “Increasingly there is an understanding that there are not just respiratory diseases but cardiovascular ones associated with PM2.5s.”

In the UK more than 90% of the population lives in areas with levels of PM2.5s above the WHO’s air-quality limits of 10 micrograms per cubic metre for the annual mean. The government is in the high court on 18 and 19 October facing a legal challenge by environmental law group ClientEarth, which says ministers’ clean-up plans for another pollutant – nitrogen dioxide – are inadequate.

Globally, 92% of the population breathes air that breaches WHO limits but the world map of deaths caused by PM2.5s changes when looked at per capita. When ranked by the number of deaths for every 100,000 people, Ukraine jumps to the top of the list at 120.

Most of the air pollution comes from cars, coal-fired plants and waste burning but not all of it is created by humans. Dust storms in places close to deserts also contribute to dirty air, explaining partly why Iran is at 16th highest for total deaths, at 26,000 a year.

Most of the total deaths worldwide – two out of three – occur in south-east Asia and the western Pacific, which includes China, Vietnam, Japan, Australia, South Korea and small Pacific island states.

Shaddick said: “We might think of [pollution in] Beijing as being very high, but when you fill in the gaps between the big [Chinese] cities, [air pollution in] regions [is] remarkably high compared to the WHO limits [10 grams per cubic metre for the annual mean], up in the 50s and 60s. That’s something we in the west can’t even comprehend. That was probably a bit of a shock [to me].”

The Pacific states of Brunei Darussalam, Fiji and Vanuatu have the lowest number of deaths from air pollution, the WHO found.

Anne Hidalgo, mayor of Paris and chair-elect of a network of cities combating climate change, said: “Fighting pollution is one of my top priorities as mayor of Paris. It is a vital public health issue and all mayors should take on their responsibility to deliver bold actions.”

The city of Paris voted on Monday to ban cars along a stretch of the river Seine to cut pollution, defeating a minority rightwing opposition.

Hidalgo added: “I have said it before and am saying it again: we cannot negotiate with Parisians’ health.”

Neira said Canada and Scandinavian countries deserved praise for curbing air pollution and singled out France too. “France is taking a lot of action, Paris is taking aggressive measures: aggressive in the good sense. [It] maybe unpopular because it’s for the health of people but they are putting some restrictions on individuals. We all need to understand this is a matter of public health,” she said.