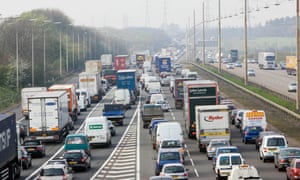 Ministers have admitted that 169 local authorities were found to have gone over annual limits on nitrogen dioxide. It is an invisible gas produced predominantly by road traffic, and is linked to lung disease and cardiovascular problems such as heart attacks and strokes.

Monitoring stations in councils across all four nations of the UK recorded breaches of the legal limits on NO2, data from the Department for Environment, Food and Rural Affairs shows.

A report in April from the environment, food and rural affairs select committee stated that poor air quality was linked to more than 40,000 premature deaths in the UK every year. The committee is chaired by Neil Parish, the Tory MP who obtained the latest figures from the government.

Parish said he was working with the liberal conservative thinktank Bright Blue to secure the power and funding to introduce a clean air zone in pollution hotspots in all local authorities. This month, the government made available £3m for councils to bid for funding to improve air quality.

Parish said: “These are shocking statistics. When we think of areas breaking air quality laws, we usually think of a handful of areas in our busiest towns and cities. These figures show just how widespread the problem is across the UK. It requires a comprehensive solution – urgently”.

“The government needs to act now to give all councils the power – and crucially, the funding – to implement a clean air zone and limit the most polluting vehicles in hotspot areas. The £3m government funding pot is a start but not nearly enough. We also need a big push to incentivise electric and low emissions vehicles to replace the oldest, most polluting vehicles.”

The government is being hauled before the courts over its failure to tackle the levels of nitrogen dioxide. A 1999 European Union directive set legal limits that came into force in 2010. Now the legal activist group, ClientEarth, is asking the high court to order ministers to come up with a better plan for improving air quality.

“The government’s current plans for clean air zones in just five cities do not go far enough. Ministers should enable all city councils to set up clean air zones to restrict the dirtiest cars from urban centres.

“Together with measures to encourage greater uptake of electric vehicles, this approach would reduce air pollution, cut carbon emissions and boost automotive manufacturing in the UK.”