In Ghana’s capital, cars, motorbikes and minibuses jostle for road space during a daily descent on the city centre. With air pollution killing thousands every year and Accra’s population set to double within 20 years, can the city find a solution? 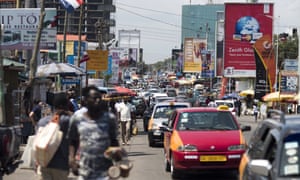 very morning before the sun rises, Stella Ampofo, a 25-year-old single mother of two boys, frantically gathers her belongings and sets off for work to beat the morning traffic in Ghana’s capital, Accra. If she doesn’t leave before daybreak, congestion during rush hour could extend her 40-minute journey from Accra’s suburbs towards downtown to three or four hours.

“I’m in trouble if I leave my house around 6 or 6.30am,” Ampofo says. “I then won’t arrive at work until nine or 10am, and that creates a lot of problems with my manager because I’m supposed to get there by eight. If the government doesn’t do anything about the traffic, it’s not going to get any easier …”

To ensure a punctual arrival, Ampofo, a seamstress at a manufacturing centre that converts plastic waste into reusable products, leaves her home at 4am every day and begins work an hour later – just as the road traffic starts to build up, as roughly 2 million daily commuters converge on the central business district in downtown Accra.

Clouds of black exhaust fumes hover over the heads of impatient motorists. Cab drivers blast their horns, while pedestrians scurry on to rickety commercialised minibuses – referred to as “tro tros” by locals – that carry up to two-dozen passengers squeezed tightly together. Only motorcyclists who can skilfully manoeuvre between lanes are able to bypass the congestion. 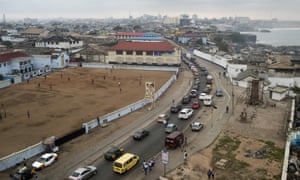 Although gridlock typically costs European economies billions of dollars annually, insufficient data in developing countries makes it difficult to assess the economic impact on cities such as Accra. A recent report by the World Bankmeasuring the cost of air pollution globally, however, provides some insight into how congestion affects people’s health. Gridlock causes longer travel times, which increases fuel use and emissions. In 2013, a total of 17,524 Ghanaians died from air pollution, a 107% increase from 1990.

“Accra has struggled with the management of the mobility challenges and rising traffic congestion on almost all arterial routes to the central business district,” Lawrence Kumi, director of research, statistics and information management at Ghana’s Ministry of Transport, admits in an email. “The implementation of various remedial measures was on an ad-hoc basis and not well coordinated. There was the need for a holistic approach.”

In 2014, the government of Ghana began developing a plan to reduce congestion and overhaul the urban transportation system in the Greater Accra Metropolitan Area (Gama), which includes Accra and its outskirts. The plan was in collaboration with the Korea International Cooperation Agency (Koica), and supported by a $1.5m grant from the South Korean government.

Before the end of this year, the final transport master plan (TMP) is due to be presented to Ghana’s ministry of transport for implementation. The plan seeks to “bring together all modes of transport … not only by road” and “reduce traffic congestion and logistic costs” over the next 20 years. 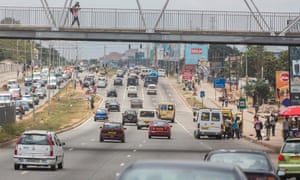 Greater Accra’s current population of around 4.3 million is predicted to almost double by 2035 – likewise the number of vehicles on the roads. While increased congestion can reflect a city’s growing economic vitality, the potential negative effects – low worker productivity, hours-long delays, more dangerous roads, commuter stress, pressure on road infrastructure and an unhealthy intake of dirty fuel emissions – will place a serious strain on the city if it is not addressed soon.

Accra is not alone in facing transportation challenges. Nearby Lagos, the economic capital of Nigeria, is notorious for being one of the most gridlocked cities in the world. But its population is around five times Accra’s, and its economy greater than the whole of Ghana – so according to Kweku Amoasi, associate director for transport planning at the London-based engineering consultancy RSK, Accra should have no excuse when it comes to severe congestion.

“With a small population, Ghana should be able to manage traffic much better,” Amoasi says. “There’s just been a total lack of foresight. The planners should sit down and realise they’re not doing this for themselves; they’re doing it for the nation.”

Bernard Abeiku Arthur, a senior urban specialist with Belgium-based Cities Alliance, says it is this kind of regulatory neglect that has led to today’s unabating traffic troubles and dysfunctional transport system in Accra. “We knew the population was growing,” Arthur says. “We knew we were getting urbanised, but we ignored all the necessary ingredients and elements for planning our urban space properly.”

Arthur says the new TMP is “very fanciful” on paper, but also too limiting geographically – excluding regions beyond Greater Accra from which much of the traffic originates. “The urban area is impacted by the fringes,” Arthur said. “So if you’re doing your calculation and you cut out the fringes, you might not be doing a very good calculation.”

Francis Akakpo, programme officer at Koica in Ghana, says the planners were unable to conduct research on areas beyond the Greater Accra Metropolitan Area because of “limited time and resources”.

Ghana’s first mass transit bus system, Omnibus Services Authority, was established in 1927 during the British colonial period. After independence, public transportation remained largely state-owned until the late 1980s and early 90s, when the government divested itself of assets amid financial mismanagement. This was when the privately run buses appeared to fill the gap: the tro tro, a significant contributor to congestion, has been the most common mode of mass transportation ever since.

In September, however, the Greater Accra Passenger Transport Executive launched a pilot run of a new Bus Rapid Transport (BRT) system, unleashing city buses across several major routes throughout Greater Accra. In defiance of Ghana president John Mahama’s claims that this marked “the beginning of a new modern public transport network” for the city, tro tro operators and other commercial drivers threatened to strike over fears the new buses would force them out of operation.

The final TMP proposes building on the city’s new bus network by replacing thousands of tro tros with high-capacity buses that promise to be safer, faster and more comfortable – a move that looks set to increase tensions with the existing transport providers. These buses will only be released “on a gradual, incremental basis, to make room for adoption and acceptance”, says Koica’s Francis Akakpo.

But according to Abeiku from Cities Alliance, even a successful implementation of the public bus system will only provide minimal relief to congestion. For sustainable long-term improvements, he says, planners must commit to focusing on rail, tram and subway developments so commuters like Stella Ampofo aren’t forced to upend their daily lives just to get to work.

“We have to envision what kind of city we want Accra to be,” Abeiku says. “Do we want a city that supports its economy, whose people feel free to move around? A city where public transportation is properly regulated? That is the kind of city I want.”