Study tracking 6.6 million people estimates effect on one in 10 cases of Alzheimer’s while those living by busy roads are 12% are more likely to be diagnosed with dementia 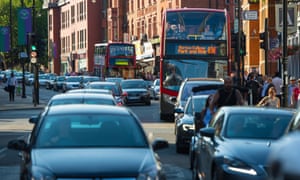 People living near a busy road have an increased risk of dementia, according to research that adds to concerns about the impact of air pollution on human health.

Roughly one in 10 cases of Alzheimer’s in urban areas could be associated with living amid heavy traffic, the study estimated – although the research stopped short of showing that exposure to exhaust fumes causes neurodegeneration.

Hong Chen, the scientist who led the work at Public Health Ontario, said: “Increasing population growth and urbanisation has placed many people close to heavy traffic, and with widespread exposure to traffic and growing rates of dementia, even a modest effect from near-road exposure could pose a large public health burden.”

Previously, scientists have linked air pollution and traffic noise to reduced density of white matter (the brain’s connective tissue) and lower cognition. A recent study suggested that magnetic nano-particles from air pollution can make their way into brain tissue.

The latest study, published in The Lancet, found that those who live closest to major traffic arteries were up to 12% more likely to be diagnosed with dementia – a small but significant increase in risk.

The study, which tracked roughly 6.6 million people for more than a decade, could not determine whether pollution is directly harmful to the brain. The increased dementia risk could also be a knock-on effect of respiratory and cardiac problems caused by traffic fumes or due to other unhealthy life-style factors associated with living in built-up urban environments.

Rob Howard, a professor of old age psychiatry at University College London, who was not involved in the study, said: “We know that major road air pollution is bad for general health and this latest study doesn’t tell us whether the small increase in dementia risk is driven by indirect effects or whether proximity to traffic directly influences dementia pathology. Regardless of the route of causation, this study presents one more important reason why we must clean up the air in our cities.”

However, others cautioned that those living close to main roads should not be unduly alarmed by the findings.

Prof John Hardy, a neuroscientist at University College London said: “The analyses are exceedingly complex … and this always leads to concerns that the analytic complexity is hiding confounding factors in the analytic pipeline. There are several reasons why one might not want to live near a major road, but this study is not an additional one.”

The study tracked all adults aged between 20 and 85 living in Ontario, Canada from 2001 to 2012, using postcodes to determine a person’s proximity to major roads. The cohort’s medical records were examined to see who went on to develop dementia, Parkinson’s disease or multiple sclerosis.

The scientists found no link between living near a road and Parkinson’s disease or multiple sclerosis, but dementia was slightly more common in people living close to busy roads and the risk dropped off gradually in less built-up areas. Those living within 50 metres of a busy road had a 7% higher risk in developing dementia, the risk was 4% higher risk at 50-100 metres, 2% higher risk at 101-200 metres and there was no increase in risk in those living more than 200 metres away.

Those who lived in a major city, within 50 metres of a major road and who did not move house for the duration of the study had the highest risk at 12%.

The scientists took into account wealth, education, and various other measures of health and social status in their calculations, although they acknowledged that it was impossible to eliminate the potential for other confounding factors playing a role.

Ray Copes, chief of environmental and occupational health at Public Health Ontario, and a co-author of the Lancet paper, said that those living in cities should consider walking along side streets, jogging in parks and planning cycle routes along quieter roads where possible. “The real implications are not for individual choice, but at the societal and policy level,” he said, adding that air pollution should be factored into urban planning and building design to reduce exposure.