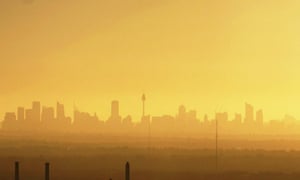 An air pollution alert has been issued for Sydney residents due to a high level of ozone, already exceeding government standards for the entire year.

The NSW Office of Environment and Heritage put the air-quality forecast for Sydney’s metropolitan area on Tuesday as “poor”, denoting a score of 100-149 on the Air Quality Index (AQI). “Hazardous” is classified as 200 and above.

Ozone is an irritant secondary pollutant formed by chemical reactions between atmospheric gases and nitrogen oxides from car-vehicle exhausts on sunny days. The problem is exacerbated by lack of wind.

As temperatures increase, so does ozone production, meaning it forms more readily in summer and reaches its highest concentrations in the afternoon or early evening.

Matthew Riley, the director of climate and atmospheric science at OEH, said higher levels of ozone were not unusual in Sydney over December and January.

The national standards allowed for one day above the accepted ozone levels per year, to account for extreme events such as bushfires that can increase production, said Riley.

Ozone levels exceeded that level in Richmond and St Marys in western Sydney late on Monday afternoon and could do so again on Tuesday or Wednesday, due to high temperatures and weak winds.

As well as worsening existing respiratory conditions such as asthma, breathing in too much ozone could cause eye, nose, throat and lung irritation, as well as coughing and shortness of breath.

NSW Health advised sufferers to use their medication when necessary and, if symptoms worsened, to seek medical advice. The department’s Dr Ben Scalley said parents should limit the time children with asthma play outside.

“Ozone levels reach their peak around 7pm in the evening and tend to be lowest in the morning, so it’s best to plan outdoor play in the morning when the day is cooler,” he said.

The alert coincides with a period of sweltering summer weather for Sydney and its surrounding regions. Temperatures were forecast to hit 31C in central Sydney on Tuesday. Residents of the western suburbs were expected to see a high of 37C.

The Bureau of Meteorology forecast a high of 38C in the city on Wednesday, cooling on Thursday, then rising again to temperatures in the early 30s on Friday and Saturday.

Richmond and Penrith were both forecast to reach 40C on Wednesday and 42C on Friday. Inland NSW would bear the brunt of the hot weather, with a heatwave at severe or extreme levels past 45C on Wednesday, the weather bureau said.

The NSW Rural Fire Service has warned of a heightened risk of bushfires this week, and urged farmers to protect their properties by putting in firebreaks around paddocks and other assets.