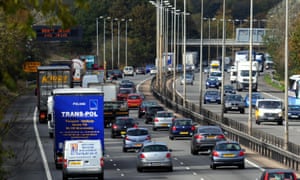 A proposal to impose Britain’s first pollution-linked speed limits in order to help ease smog over Sheffield is being considered by Highways England.

A 60mph speed limit at rush-hour when vehicle numbers are highest where the M1 runs close to schools and homes in the city could help address air quality concerns, a report commissioned by the agency found.

The mandatory speed limit, if approved, would be in place between 7am and 7pm seven days a week between junctions 32 and 35a.

The suggested initiative follows a Nice study, published in December, which found that “driving smoothly” could ease air pollution. Accelerating or decelerating too rapidly leads to greater fuel consumption and means harmful emissions are being released into the environment unnecessarily, the study found.

A 60mph speed limit could also help create a smoother journey as drivers would not be be accelerating and then decelerating at pinch points so often, a spokesperson for the AA said.

The plan coincides with Department for Transport (DfT) plans for a £106m “smart motorway”, which is due to launch in March.

The scheme is likely to add thousands of cars, vans and other vehicles to the roads, causing an increase in air pollution. Sheffield already misses EU air quality targets and was highlighted by the World Health Organisation for having dangerously high levels of air pollution.

To mitigate the increased pollution caused by the smart motorway scheme, Highways England, which admits it is a “key challenge”, has been trialling a number of initiatives.

Currently, an average of approximately 120,000 vehicles per weekday use the motorway in Sheffield, according to Mouchel, an engineering consultancy that put together the report.

It estimates that the smart motorway scheme will add a further 5,000-10,000 vehicles a day by opening the hard shoulder to traffic. It stated: “Air quality assessment predicted that operating a [smart motorway] at 70mph, 24 hours a day, seven days a week, would result in significant adverse impacts on air quality.”

The consultancy firm found that the best way to prevent an increase in illegal pollution would be to implement a speed limit.

The AA spokesman said the proposal, if implemented, could provoke anger among road users, who will face fines if they exceed 60mph.

He said: “Car users are always the easy hit when it comes to pollution when actually they are not one of the main contributors. There will be people raising their eyebrows about whether this is just an example of the authorities trying to look like they are doing something.

“There will be a section of car users, who will see that this is not safety-related, and that they are being penalised for emissions that are likely to have come from other sources as well. That same section will say they pay billions of pounds in taxes … and if we’re contributing that amount of money why isn’t it being spent on the road network to deal with the issues?”

He added: “There is a very good chance that the traffic is already moving at that speed during rush-hour.”

Highways England stressed that the speed limit is just one of “a range of other mitigation options” being trialled, and that despite the scheme being due to launch at the end of March, “there is no suggestion of a delay to the scheme on the M1 and there will be mitigation in place for when the scheme opens”.

Other options include painting barriers with “catalytic paints” designed to remove pollutants from the air and putting piles of “mineral polymer” – made from a secret compound that absorbs nitrogen dioxide – alongside the road.

Clive Betts, MP for Sheffield South East, told the Sunday Times: “Sheffield has already had to close two schools by the M1 because the pollution was so bad, but there are still many residents breathing filthy air — and there will be far more if the motorway gets busier.

“The government has known about this problem but has still expanded the motorway. Now it is trialling these Mickey Mouse schemes which are bound to fail.”

A Highways England spokesperson said: “Smart motorways are central to the modernisation of England’s motorways, reducing congestion and improving journey time reliability by smoothing traffic flows. One of our key challenges in delivering the £15bn government investment in infrastructure is tackling the issue presented by air quality and in order to meet environmental targets we are investing in wider programme of air quality research to help address this.”

A DfT spokesperson said: “We are firmly committed to improving the UK’s air quality and cutting harmful emissions. That is why we have invested more than £2bn since 2011 to promote greener vehicles and support green transport schemes and have set out how we will improve air quality through a new programme of clean air zones.”

The proposal comes as Sheffield’s Green party launch a campaign to tackle the city’s poor air quality. A statement said: “Air pollution continues to exceed legal limits in many areas, contributing to an estimated 500 premature deaths in Sheffield every year.

“We call on Sheffield city council to take action to tackle this public health crisis by urgently agreeing and implementing a new action plan to clean up the city’s air and protect our health.”