The UK’s deadly air pollution can be cured: here’s how 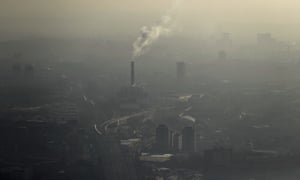 Pollution levels in the UK are soaring. Last year, a committee of MPs in the UK described the state of the air that we breathe as a public health emergency.

London mayor Sadiq Khan has a budget of £875m to try to tackle air pollution – small, compared to the capital’s annual £3.6bn bill arising from its impact.

And while there may be recognition of the problem, there are fewer examples of successful solutions. How can we travel without harming other people’s health? How can businesses deliver paper clips, coffee and food without polluting the air we breathe?

An estimated 40,000 people across the UK (9,500 in London) die early each year from particle pollution and nitrogen dioxide. Three roads in London have already breached UK and EU limits for nitrogen dioxide for 2017. We have a lot to do and simply cleaning exhausts is not enough.

Diesel traffic is a main source of urban exposure and over half the world’s diesel vehicles are sold in Europe. The low emission zone is the weapon of choice. Over 200 cities now ban the most polluting vehicles. German cities with such zones have made faster progress on particle pollution than those without.

Particle pollution on some main roads in London has improved when lorries were upgraded ahead of the low emission zone. France has just launched a national framework for low emission zones, and following the government’s court defeat, new zones look set for many UK cities.

Low emission zones exclude older vehicles, assuming they emit more pollution than the newer ones. But, for many years, new diesels passed ever-tighter exhaust tests in the laboratory only to emit much more nitrogen oxides on roads. This goes beyond the VW scandal. Other vehicle manufacturers might not have a legal case to answer but they certainly have a moral one.

Promisingly, it looks like the newest buses and lorries produce just a few per cent of the nitrogen oxides when compared to pre-2014 vehicles and, astonishingly, less than half that emitted from the average new diesel car. Fitting better exhaust controls to older buses works too; on one London street nitrogen dioxide fell by around 20% when half the buses were upgraded. Petrol exhaust technologies have worked well for more than 10 years. Greater priority also needs to be given to freight in transport planning to reduce lorry and van movements.

Each year’s delay means more health harm. One answer would be a switch to only the very newest buses and lorries, and petrol cars instead of diesel, while alternative fuelled vehicles and their fuel infrastructure are developed longer-term. This requires scrappage and investment schemes. A large cost but the cost of not doing it is massive.

However, simply cleaning exhausts would be a missed opportunity to build better cities. Reducing traffic would reduce air pollution, reduce climate change emissions, tackle the increasing particle pollution from brakes, tyre and road wear and, with more active travel, it would have huge health benefits.

An annual benefit of €1,300 (£1,126) could come from each person who swaps a five km daily car commute to a cycle journey. Above all, we need to monitor to check that policies work and to ensure that all communities benefit from investment to clean our air.

Source: The UK’s deadly air pollution can be cured: here’s how | Public Leaders Network | The Guardian