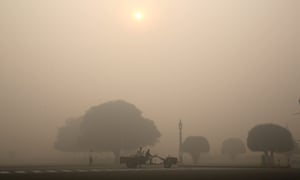 India’s environment minister has been accused of playing down the health risks of the country’s extremely polluted air by claiming, contrary to research, that there is no conclusive data available linking “death exclusively with air pollution”.

The environmental group Greenpeace released a report in January citing Global Burden of Disease (GBD) research that estimated nearly 1.2 million Indians die each year due to high concentrations of airborne pollutants such as dust, mould spores, arsenic, lead, nickel and the carcinogen chromium.

It found that no cities in northern India, and only a handful of regions in the rest of the country, met international air quality standards, with pollution rates particularly high in the capital, Delhi, and the neighbouring state Uttar Pradesh.

Asked about the report in India’s upper house, the environment minister, Anil Madhav Dave, said on Tuesday: “There is no conclusive data available in the country to establish direct correlation-ship of death exclusively with air pollution.”

He said the health effects of air pollution were a “synergistic manifestation of factors which include food habits, occupational habits, socio-economic status, medical history, immunity, heredity etc of the individuals”.

“Air pollution could be one of the triggering factors for respiratory associated ailments and diseases,” he added.

Sunil Dahiya, a campaigner with Greenpeace India, said the remarks were contrary to the findings of the GBD survey, a comprehensive global research program that monitors the causes of illness and death in every country in the world.

The 2015 edition of the survey estimated that 3,283 Indians died each day due to outdoor air pollution, making for around nearly 1.2 million deaths annually. Dahiya said the air pollution estimate controlled for “all imaginable risk factors, from obesity, to smoking and insufficient consumption of fresh fruit … and many other risks”.

Researchers have argued that the frequent inhalation of tiny pollutantsin particular may increase the likelihood of blood clots, damage the body’s ability to oxygenate blood and inflame tissue in the nervous system.

India has been slower than its neighbour, China, to address the problem of toxic air, which in Delhi is attributed to a range of sources including road dust, vehicle exhaust fumes, open fires, industrial emissions and the burning of crop residues in neighbouring states.

But India has taken steps in the past two years to grow its network of air-quality monitors, push cleaner fuels, upgrade vehicle emissions standards and has mandated – but not yet fully rolled out – new technology to limit emissions from coal-fired power stations.

While acknowledging the problem, Indian government bodies have been sensitive about accepting international findings on the issue, rejecting a 2014 World Health Organisation study that declared Delhi the world’s most polluted city.

It has also repeatedly had run-ins with Greenpeace, temporarily freezing the NGO’s funding and accusing it of being one of several groups conspiring to stymie India’s economic growth.

Polash Mukherjee, a researcher with the Delhi-based Centre for Science and Environment, said different groups came up with different estimates of the number of deaths caused by air pollution because of varying methodologies or interpretations. “But what is undeniable is that there is an effect on the health of people,” he said.

The burden of harm from air pollution falls mainly on the poor, the elderly and children. A report from Unicef in October estimated that poor air quality contributed to the deaths of 600,000 children around the world each year.