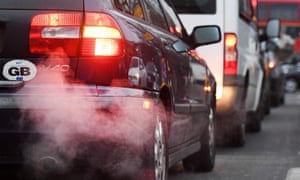 People across the UK are underestimating the impact of the air pollution crisis in their local areas, according to a new survey.

Almost two thirds of respondents said they were concerned about the issue of air pollution, but only one in 10 said they thought the air they breathe is bad.

Last week the Guardian revealed that there are 802 educational institutions in the capital where pupils as young as three are being exposed to illegal levels of air pollution that can cause serious long term health problems.

Friends of the Earth, which carried out the latest survey, said that despite the growing evidence many people – particularly outside London – were still unaware of the dangers of air pollution.

“With only 1 in 10 British adults rating their air quality as poor despite swaths of the country breaking legal limits for air pollution, it seems the message about the scale and danger of air pollution isn’t getting through,” said Oliver Hayes, a Friends of the Earth air pollution campaigner.

“Often you can’t see it or smell it, but it’s there – and air pollution is risking the health of an entire generation of children.”

To coincide with the findings Friends of the Earth has launched what it says will be the “biggest ever citizen science air pollution experiment”. People can apply to the charity for clean air kits, enabling them to test the air quality where they live, and FoE will provide tips on how to avoid air pollution and what people can do to help support the campaign for clean air.

Hayes said: “Our clean air kits help people to find out about the air quality in the places they care about most: on the street where they live, where they work, where their children go to school and at the heart of their communities.

“The results will help us build up a localised picture of the state of our nation’s air to really bring home why everyone, from individuals to businesses and politicians, must do all they can to make the air we breathe safer.”

Air pollution is linked to heart disease, lung cancer, worsening asthma and poor lung development in children and leads to the premature deaths of around 40,000 people every year in the UK.

The Friends of the Earth report coincided with a separate study for the Greater London Authority which found a much higher awareness of air pollution in the capital.

It found that nine out of 10 people in London believe air pollution is at crisis levels and two thirds describe air quality in their local area as bad.

It also found that every London borough has recorded illegally high levels of air pollution in the last two years.

Hayes said: “Whilst Londoners are starting to understand the air pollution crisis, in part due to welcome attention from politicians and the media, outside of the capital it’s a very different story.”

Friends of the Earth said it hoped thousands of people will join in the charity’s experiment so it can create a comprehensive national air pollution picture. It said the data generated will feed into a national map which will help create a “state of the nation” report on air pollution.

Source: British people unaware of pollution levels in the air they breathe – study | Environment | The Guardian