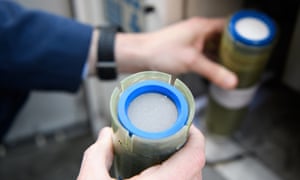 Environmental lawyers are taking the government to the high court for a third time in a bid to remove “major flaws” from minister’s plans to tackle the UK’s illegal levels of air pollution.

ClientEarth has inflicted two humiliating defeats on the government over previous plans, which were ruled not to meet legal requirements. Lawyers from ClientEarth had requested improvements to the latest plan from the Department for Environment, Food and Rural Affairs (Defra) but were refused, prompting the new court action.

Levels of nitrogen dioxide (NO2), emitted mostly by diesel vehicles, have been above legal limits in almost 90% of urban areas in the UK since 2010. The toxic fumes are estimated to cause 23,500 early deaths a year and the problem was declared a public health emergency by a cross-party committee of MPs in April 2016.

“We have been looking at the fine detail of the draft air quality plans published by the government,” said James Thornton, chief executive of ClientEarth. “We have found some major flaws. The law requires the final plan to bring air pollution down to legal levels in the shortest time possible. These flaws seriously jeopardise that timetable. These are plans for more plans, what we need are plans for action.”

The government’s latest proposals were published on 5 May and were widely condemned, with the mayor of London, Sadiq Khan, calling them “woefully inadequate”.

ClientEarth’s lawyers argue that technical documents published show that the most effective way to reduce toxic air is by discouraging polluting vehicles from entering cities and towns. However, the consultation published by the government states that charging zones should only be the option of last resort, after all other measures such as removing speed bumps and encouraging cycling have been tried.

But as the technical documents show these other measures are not nearly as effective, ClientEarth’s lawyers say the government’s plan does not meet the court order to cut air pollution in the shortest time possible, as the law requires.

Lawyers also say that while the court ordered the government to produce a new plan, it produced only a consultation for a plan. Defra declined to comment during ongoing legal proceedings.

Conservative ministers are reluctant to implement charges on diesel drivers who were given tax breaks to buy diesel cars, which have lower carbon dioxide emissions.

Regulations were supposed to limit NO2 emissions but cheating and the exploitation of loopholes by car manufacturers led to vehicles that emitted far more pollution on the road than in lab tests. Such cars are still on sale, including Renault and Nissan models that emit 15 times more NO2 on the road than in the lab test.

ClientEarth’s legal action will be considered by the court, which will decide whether a hearing will be granted. The judge in the most recent case, Justice Garnham, was critical of the government: “The continued failure of the government to comply with directives and regulations constitutes a significant threat to public health.”

Therese Coffey, environment minister, said: “The Conservatives will further improve air quality while making sure that ordinary working families are not penalised for Labour’s mistakes. The government is also consulting on what further steps can be taken to mitigate any cost and burdens on ordinary working families and local firms – including the options of targeted scrappage schemes and retrofitting initiatives.”

Proposals put forward within government for a previous plan did include 16 new clean air zones, which would have charged drivers of polluting vehicles to enter urban areas. But court documents revealed that the Treasury, then run by George Osborne, had blocked these proposals due to concern about the political impact.

The global human health impact of the diesel emissions scandal was revealed earlier in May by new research showing a minimum of 38,000 people a year die early due to the failure of diesel vehicles to meet official limits in real driving conditions.