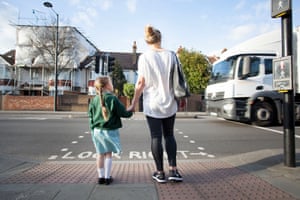 Taking a side street route when walking through a city cuts a person’s air pollution exposure by half, according to a new study.

Signposting these clean air routes and providing online maps would keep people away from heavily polluted main streets and would benefit their health, the researchers said. In fact the UK group behind the research have developed a new interactive map of London that allows people to put in any route and be shown a low-pollution walking option.

Air pollution is the “world’s largest single environmental health risk”, according to the World Health Organisation, with 80% of the world’s urban population now living in cities that exceed WHO standards for pollution.

The new research was conducted in London, which has illegally high levels of toxic air. The team from King’s College London analysed seven popular routes through the city, with different researchers simultaneously walking along main road and backstreet routes while carrying pollution measuring equipment.

The routes included King’s Cross Station to Euston Station, Embankment to Covent Garden, and Earl’s Court to Holland Park; each pair of routes were similar in length. Black carbon was measured as it comes primarily from diesel vehicles, which are the main source of the city’s pollution problem.

The average reduction in overall pollution exposure for those taking the side street routes was 53%, with the cuts ranging from 30-60%. Gary Fuller, at King’s College London, said: “This could be better in so many ways for people’s pollution exposure and probably for their sense of wellbeing as well. Anything you can do to limit your exposure will be good for your health. 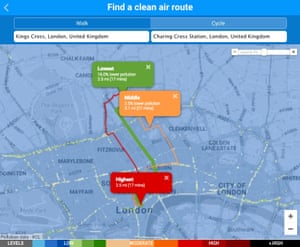 “The same applies anywhere, so it would be great if these ideas were taken up in other cities,” he said. “We weren’t surprised at the results, but it was very nice to be able to demonstrate what we believed we would find.”

The research, released ahead of the UK’s National Clean Air Day on Thursday, was commissioned by Cross River Partnership (CRP), a public-private city regeneration group with funding from the Mayor of London. “There is a lot of work going on to improve air quality in London but we are not going to get to the point any time soon in the next couple of years where we are meeting the WHO targets,” said Brendon Harper, CRP’s air quality project manager. So it is very important we encourage people to change the way they walk and cycle [to work] so they can reduce their exposure.”

Harper said the first clean air walking route to be signposted in London was the Kings Cross-Euston route, which has already seen a tripling in footfall and a boost to local businesses.

The air pollution problem in the UK has been called a public health emergency by a cross-party committee of MPs. Levels of nitrogen dioxide (NO2), emitted mostly by diesel vehicles, have been above legal limits in almost 90% of urban areas in the UK since 2010.

These and other toxic fumes are estimated to cause 40,000 early deaths a year but the government has failed to take effective action. The environmental law firm ClientEarth has already defeated the ministers twice in the courts over the adequacy of air quality plans.

Ministers’ latest proposals were published on 5 May but were widely condemned as inadequate, and ClientEarth is now suing the government a third time. The new environment secretary, Michael Gove, has yet to make any statement on air pollution.

Oliver Hayes, Friends of the Earth air pollution campaigner, said: “Our analysis of the government’s own data shows the scale of this public health crisis. It is not acceptable that air pollution is predicted to go on damaging people’s lungs for years to come. People in Birmingham and Leeds would be breathing toxic air for nearly another decade, unless more is done without any more delay.

“The current plans for cleaning up our air are just not enough,” he said. “With 40,000 early deaths each year from air pollution, and children’s young lungs especially vulnerable, this is a sickening amount of suffering that is preventable.”

Source: Side street routes to avoid city pollution can cut exposure by half | Environment | The Guardian