Six new vehicles including Land Rover and Suzuki are adding to air pollution crisis, despite stricter rules coming in months 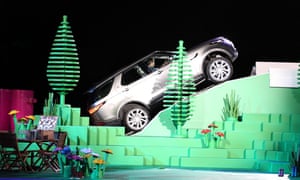 The latest diesel car models are failing to meet pollution limits when on the road, just three months ahead of stricter new tests, independent tests have found. Results show that none of six new 2017 diesel cars met the EU standard for toxic nitrogen oxides (NOx) pollution in real-world driving.

The updated Equa Index, produced by the testing firm Emissions Analytics, shows that 86% of all diesel models put on to the British market since the 2015 Volkswagen emissions scandal failed to meet the official limit on the road, with 15% producing at least eight times more NOx emissions.

Levels of NOx, emitted mostly by diesel vehicles, have been illegally high in 90% of the UK’s urban areas since 2010. The toxic fumes are estimated to cause 23,500 early deaths a year and the problem has been called a public health emergency by a cross-party committee of MPs.

Ministers have already lost twice in the courts over the adequacy of government air quality plans and are being sued again over their latest proposals, which were published on 5 May but widely condemned as inadequate. The government’s own analysis shows clean air zones in urban centres, where charges deter the most polluting vehicles, are the most effective way to cut pollution quickly. But Nick Molden, CEO of Emissions Analytics, said the wide variation in real-world performance of diesel cars undermines such plans.

The government has indicated that any charging plans would exempt cars meeting the latest Euro 6 standard. But while some new Euro 6 diesel cars, for example the BMW 5 Series, meet the official limit when on the road, others pump out far more pollution, with the Nissan Qashqai, for example, emitting 18 times the official limit.

“These high-emitting vehicles will leave a long legacy and a dilemma for the proposed clean air zones: how can you change on the basis of Euro standards if there is such a wild divergence in performance?” Molden said.

The latest Equa Index update, which adds 20 new models to its database, shows that 70% of the diesels launched in 2016 and 2017 emit at least double the official NOx limit when on the road. That level of emissions was the standard set for Euro 4 in 2005. The most polluting of the new 2017 models tested are Land Rover Discovery, Maserati Quattroporte and Suzuki Vitara models, though all meet current legal standards.

The current official test for NOx emissions from diesel cars is laboratory-based, and carmakers have adapted their vehicles to pass this while emitting far more NOx in real-world driving. Volkswagen was caught cheating the test and other carmakers are still being investigated.

Molden said software upgrades from manufacturers would quickly and significantly cut the emissions of many existing diesel cars. But apart from VW cars, few vehicles in Europe have been recalled.

Julia Poliscanova, from the campaign group Transport & Environment, said: “Governments should require carmakers to recall and fix these dirty diesels. It would prevent tens of thousands of premature deaths every year in Europe and beyond.”

She said the latest Equa Index data showed a continuing failure by regulatory authorities: “Only three months from the new rules and almost two years after Dieselgate exposed widespread cheating on diesel emissions, regulators continue to approve vehicles that are up to 12 times more polluting than the legal limit. This demonstrates the corrupt system where the purse of carmakers rules over public health.”

From September, new diesel models will have to pass stricter, more realistic driving tests, although they will still be allowed to emit double the official limit to allow for suggested uncertainties in the measurements.

Mike Hawes, chief executive of the Society of Motor Manufacturers and Traders, which represents the UK motor industry, said: “What has been proven by official UK government emissions tests is that new cars meet legal requirements. A new, official and robust emissions test will be in place this September, with cars tested on the road for the first time, meaning industry is meeting the toughest standards in the world.

He said: “Industry is committed to improving air quality across our towns and cities, and we look forward to working with government to encourage the uptake of the latest, low-emission vehicles, regardless of fuel type.”