The downside of summer sunshine 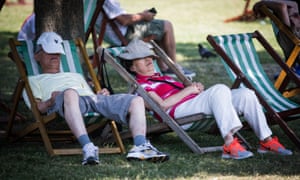 The hottest June day in the UK since 1976 caused widespread summertime smog across southern England and the Midlands. Sevenoaks in Kent and Lullington Heath, East Sussex, measured the greatest ozone level for 11 years; reaching eight on the UK government’s ten-point scale for the first time. The winds then turned westerly and carried our polluted air eastwards to create problems over Germany.

Ozone can take days to form in the atmosphere. It therefore spreads across very wide areas. To reduce the worst impacts, Paris once again banned the oldest vehicles from its roads and, in a targeted approach, restrictions were placed on industries that emit volatile hydrocarbons that contribute to ozone formation. In a re-run of the 2003 heatwave, smoke from the tragic forest fires in Portugal spread over France and reached the UK during the hot weather.

Ozone in the stratosphere protects us from the sun’s harmful UV, but breathing the ozone that forms at the ground is very harmful. Health guidelines are set assuming eight-hour exposure, based on studies of schoolchildren in summer camps. A new study of 60m elderly people in the US showed the health impacts from breathing ozone over many years in outdoor air, even at levels below current US standards.

Health impacts of air pollution are dominated by exposure to particle pollution and nitrogen dioxide, leading to the much quoted figures of around 40,000 early deaths yearly in the UK. According to European Environment Agency, including ozone exposure would add around 700 early deaths to the annual tally.

Source: The downside of summer sunshine | Environment | The Guardian