Oxford council will phase out polluting vehicles including taxis, cars and buses from city centre area in 2020 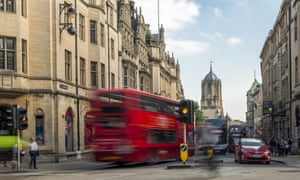 The introduction of a zero emissions zone could see levels of nitrogen dioxide fall by up to three quarters by 2035, the councils said. Photograph: David Williams/Alamy

Polluting vehicles could be banned from Oxford city centre under plans to bring in what officials believe would be the world’s first zero emissions zone.

The proposals aim to slash air pollution in the historic university city, which has seen levels of the harmful pollutant nitrogen dioxide plateau above legal limits in some areas.

Under the plans, which are being put out for consultation on Monday, the ban would be introduced in phases, starting with preventing non-zero emissions taxis, cars, light commercial vehicles and buses on a small number of streets in 2020.

As vehicle technology develops, the zero emissions zone would extend to cover all vehicle types, including HGVs, and the whole of the city centre by 2035, according to the joint proposals by Oxford city council and Oxfordshire county council.

The introduction of the zero emissions zone could see levels of nitrogen dioxide, much of which comes from traffic fumes, particularly diesel engines, fall by up to three quarters by 2035, the councils said.

Councillor John Tanner of Oxford city council said: “Toxic and illegal air pollution in the city centre is damaging the health of Oxford’s residents. A step change is urgently needed; the zero emissions zone is that step change.

“All of us who drive or use petrol or diesel vehicles through Oxford are contributing to the city’s toxic air. Everyone needs to do their bit, from national government and local authorities, to businesses and residents, to end this public health emergency.”

Oxfordshire county council councillor Yvonne Constance said: “We want to hear from everyone who uses the city centre, including businesses, bus and taxi firms and local residents, so that we get the fullest possible picture.

“We know that there will be a wide variety of views and we want hear them all. Pragmatism will be an important part of anything we plan but we have set the ambition and now we would like to hear people’s views on our proposals.”