Canberra has experienced its worst air quality on record, as bushfire smoke became trapped by atmospheric conditions and residents were told to stay indoors and brace for more smog in the coming days.

The ACT’s acting chief health officer, Dr Paul Dugdale, said the smoke was the worst since the 2003 bushfires and was “certainly the worst” since air quality monitoring started in the city 15 years ago.

Air quality index readings in Canberra city were at 3,463 on Wednesday afternoon, according to the ACT Health website. Ratings of more than 200 are considered hazardous. The suburb of Monash showed levels at 4,650 and Florey was at 3,508.

An ACT health spokesperson said the AQI reading for fine particles peaked at 7700 at 1am on Wednesday at the Monash monitoring site.

The Canberra-based University of NSW climate scientist Dr Sophie Lewis was out in the city with her two-year-old daughter and said the conditions were “like nothing I have experienced before”. She was planning to leave the city.

“It’s permeating everything. It is the fine particulates that get through everything. This is the worst it has been,” she said.

“Last night it started to blow in and you do start to feel quite anxious and stressed. Smoke just makes us all panic.”

Families and children visiting Questacon, the National Science and Technology Centre, had a look of shock, said Lewis, with many people wearing masks and checking phone apps for air quality and fire updates.

She said a pattern in recent weeks had been for the smoke from bushfires burning to the east to arrive on cooler sea breezes in the evening.

On Tuesday night and Wednesday, a phenomenon known as a “temperature inversion” had caused warmer air above to trap the smoke, making conditions especially bad.

On Wednesday morning Dugdale said 12 people had gone to Canberra hospital with smoke-related illnesses in the previous 24 hours.

Dugdale said it was not the time for people to start any new year fitness resolutions and they should stay indoors instead.

“This is an exceptional time for Canberra – usually our air quality is among the best in the world,” he said. 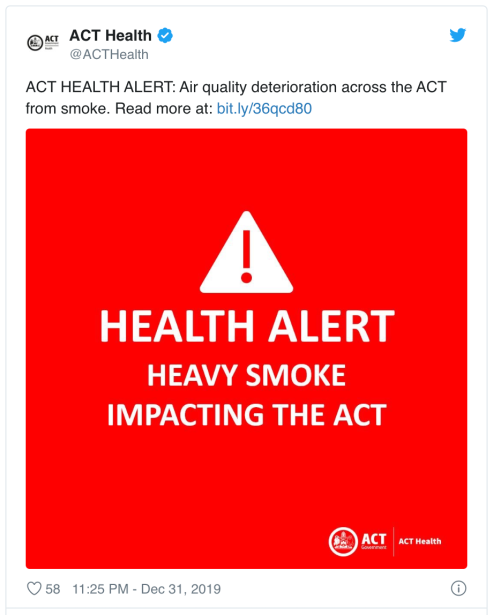 The public was advised to stay indoors with windows and doors closed and to turn evaporative air conditioners off.

The “extremely thick” smog was forecast to linger for several days, with conditions expected to remain poor, and temperatures on Saturday forecast to climb to 42C.

A statement said: “We also strongly advise people who are sensitive to smoke, especially those with pre-existing heart and lung conditions, to take extra care during these conditions.

“People who are sensitive to smoke and air pollution can be more vulnerable to heat-related illness as well, so staying hydrated and cool is important.

“People who are able to do so, are also encouraged to check on others who they think might need extra help, to see that they are okay.”

In NSW on Wednesday, the air quality index was at very high hazardous levels of 2,300 around Goulburn, caused by smoke from nearby bushfires.

Hazardous conditions were also detected in regions of Sydney’s south-west (352), and in the central tablelands (394) and southwest slopes (360). 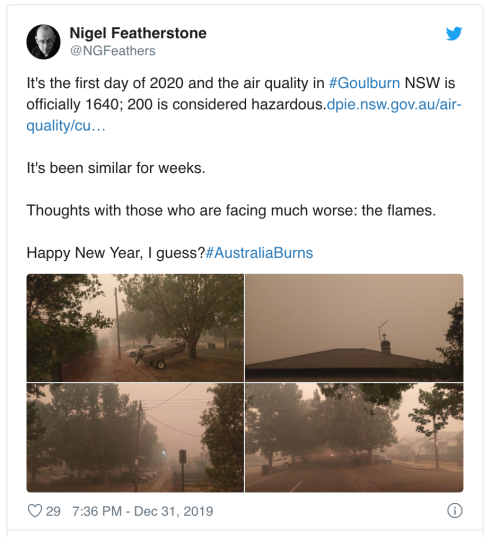