Poland: Europe’s most polluted country in trouble with the EU but still won’t clean up coal

After ten years of extreme pollution that shows no sign of abating, the European Commission has told Poland to clean up its air or else it’ll be taken to the EU Court of Justice.

The proposal designed to satisfy the Commission overlooks coal pollution, focusing instead on tackling transport and household emissions, Energydesk has learned.

Admittedly, cars and home furnaces produce the bulk of the country’s very visible PM10 pollution, but industry and energy are also significant contributors and even moreso of the toxic particulate PM2.5.

Pollution from coal-fired power plants kills 5,300 people a year in Poland —  way more than in any other country in Europe.

Speaking to Energydesk, the Commission said it is vital that Poland both reduces its high-stack emissions (those that come from coal plants) and makes its smog-drive legally binding  — which we’re pretty sure it doesn’t plan on doing. 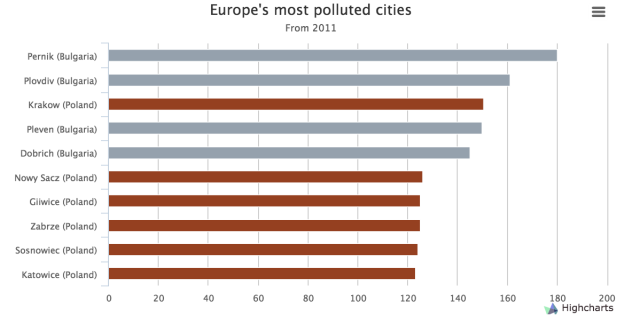 It took just three months for Warsaw, Krakow and a crop of other large Polish cities to exceed the EU’s air pollution allowance for the entire year.

By the end of March, these six cities had each recorded more than 50 micrograms of fine dust particles (PM10) per square metre on at least 35 different days.

Inhalation of PM10 particles can cause respiratory and cardiovascular health problems.

Poland, home to 6 of the 10 most polluted cities in Europe, was warned in February over its continued failure to address its pollution problem — and given two months to formulate a plan.

In its statement, the Commission said the maximum daily air pollution limits were being exceeded in 36 zones, and yearly limits breached in 12.

“The Commission believes that Poland has failed to take appropriate measures that should have been in place since 2005 to protect citizens’ health, and is asking for forward-looking, speedy and effective action.”

It’s now been three months, and so Energydesk spoke to the Commission about the stage of infringement proceedings, and whether Poland’s proposal is enough to avoid taking the matter to the EU Court of Justice.

A spokesperson for the Commission said proceedings remain at the point of “additional reasoned opinion” and that “the case may yet go to Court” — not all the zones have implemented the measures.

The Commission wouldn’t divulge details of Poland’s plans, but said the EU requires that it both be legally binding and that, in addition to fumes from transport and households, high-stack emissions are tackled.

Energydesk, however, understands that the Polish government has no plans to curb the high-stack, and that its proposal will simply empower local and regional authorities to crackdown on low-stack — basically, it would not be legally binding.

Environment Minister Maciej Grabowski earlier this year said: “This program has no legal force by definition. It is not a magic wand by which in a short time – a year or two – we will breathe clean air.”

A Commission spokesperson recently told the Gazeta Wyborcza: “There are constant infringements and Poland isn’t doing anything about it”. 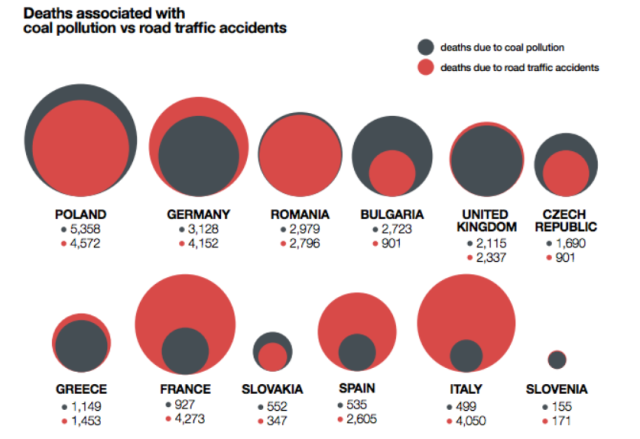 Prime Minister Ewa Kopacz has catchily called 2015 ‘the year of improving air quality,’ and so it appears only now are Polish politicians cottoning on to just how much damage the country’s extreme air pollution is doing.

But household emissions and pollution from vehicles are the only targets in this would-be clean air campaign.

And it’s true that Poland has shocking levels of low-stack, with residents burning cheap and poor-quality coal in similarly cheap and poor quality furnaces. Of the country’s primary pollution, 42% comes from households, and 19% comes from vehicles.

But industry and energy production together account for 24% of primary pollution, and are likely to be behind even more secondary pollution (though there’s just not enough data to say for certain).

And high-stack sectors contribute more PM2.5 than they do PM10, which – because it’s smaller and can more easily get into the lungs – is even more dangerous.

Polish politics is pretty much controlled by coal interests, since it produces 90% of the country’s energy and employs so many of its people, so the government would prefer not to enforce higher standards, or appear to be criticising the sector at all.

In its statement, the Commission said it would also be investigating reports that Poland has been exceeding limits on nitrogen oxide.

It’s possible that nothing will turn up; the EEA just a weeks ago gave Poland a perfect score on NOx and several other emissions all the while scolding Germany, Austria and handful of other countries.

And it doesn’t look bad at first glance, with Germany failing to meet its NOx target, which roughly the same as Poland’s. But the graph below shows absolute emissions, not per capita. Germany is more than twice the size of Poland so naturally it needs more energy, and burns more coal.

Also look at the trends. As Germany has cut its NOx emissions in half since 1990, Poland has cut its by less than 50%.

Poland is trying hard to make sure it doesn’t need to improve its power sector emissions, with its BREF delegation – half comprised of people paid by industry – pushing hard to water down future EU pollution regulations.

The leading political opposition party – Law & Justice – this week said it would fight to get an opt-out of EU climate targets.

So on coal pollution, it appears as though both sides of the Polish parliament are on the same page.

via Poland: Europe’s most polluted country in trouble with the EU but still won’t clean up coal – Energydesk.