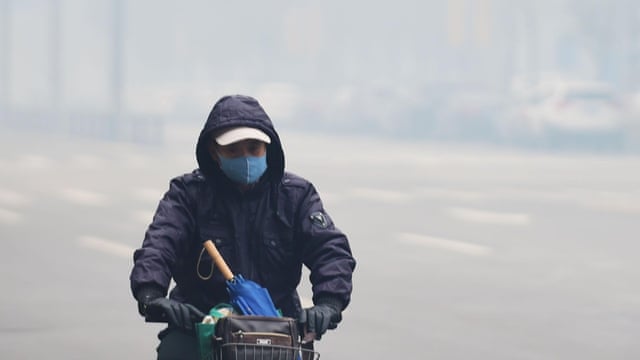 Residents of north-eastern China donned gas masks and locked themselves indoors on Sunday after their homes were enveloped by some of the worst levels of smog on record.

Levels of PM2.5, a tiny airborne particulate linked to cancer and heart disease, soared in Liaoning province as northern China began burning coal to heat homes at the start of the winter.

In some areas of Shenyang, PM2.5 readings reportedly surpassed 1,400 micrograms per cubic metre, which is about 56 times the levels considered safe by the World Health Organisation.

“The air stings and makes my eyes and throat feel sore when I’m outdoors,” one woman, who had ventured out to buy a face mask, was quoted as saying. “As for what exactly we should do, I don’t know,” she added.

By Monday afternoon there had been a slight improvement, although air quality remained at “hazardous” levels in Shenyang, an industrial city of about 8 million inhabitants.

The Associated Press said Sunday’s smog represented one of the worst episodes of air pollution recorded in China since authorities began releasing air quality data in 2013.

There was indignation on social media as China confronted its latest “airpocalypse”.

“The government knows how severe the smog problem is, so why haven’t they tackled it?” one critic wrote on Weibo, China’s Twitter.

“What’s the point of having an environmental protection department? The precondition for developing the economy is not damaging the environment. Our leaders are all well educated. Can’t they understand this simple truth?”

Others reacted with resignation. “Other than reporting it, what can the government do?”

Shenyang, a major industrial centre since the days of Mao Zedong, has been attempting to clean up its act in recent years by relocating factories and starting to use natural gas instead of coal to heat homes.

But on Monday doctors in Shenyang were dealing with the consequences of the latest bout of toxic pollution to hit their city.

Yang Shenjia, who works at the Liaoning Jinqiu Hospital, said there had been a sudden influx of patients suffering from breathing complaints over the past two days. “The respiratory department’s inpatient wards are full,” the doctor told Xinhua.