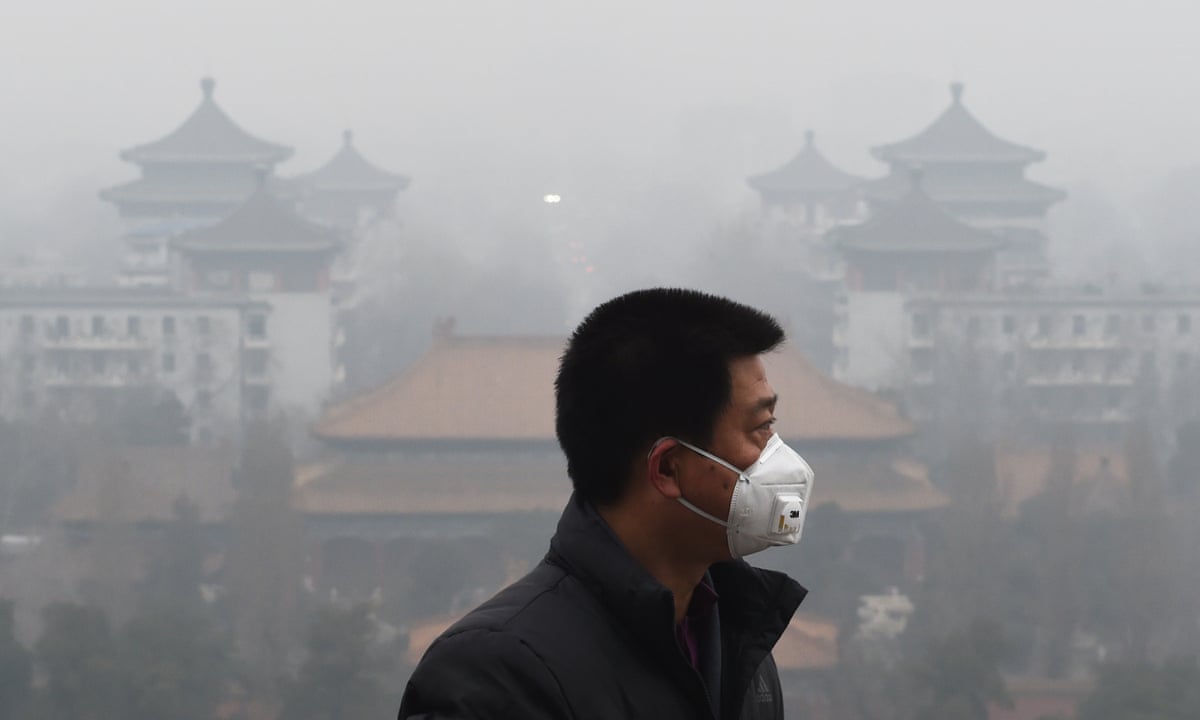 “Create a paradise,” urges the motto of Beijing’s Baijiazhuang primary school – a message stamped on to its front gate in bright red calligraphy.

And inside the four-floor main building, hundreds of small wooden desks and chairs were empty.

“Usually it won’t be this quiet,” said Wang Ye, a 24-year-old English teacher, as she toured its ghostly corridors and classrooms where forgotten rucksacks and winter coats were among the few reminders of its normal routine.

Across Beijing, thousands of other schools and nurseries were in a similar state of almost total shutdown after the city’s authorities announced a three-day state of emergency because of the pollution.

Building sites and factories were forced to close; millions of cars were ordered off the roads; and teams of environmental inspectors fanned out across the surrounding region to ensure that coal-fired power stations and steel mills were not secretly churning out even more filth into the already putrid atmosphere. 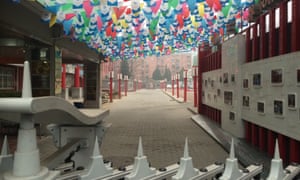 At 7am, when the red alert – the first in Chinese history – officially came into force, a thick gloom hung over Beijing.

Wearing an anti-smog facemask, Wang set off from home just before sunrise and turned up for work alongside about 60 fellow teachers.

But following government advice, just 20 of the school’s 250 children – those whose working parents had nowhere else to send them – had showed up for class.

“Learning is quite important to them but health is more important. Under the circumstances I think they should stay at home,” said Wang.

“It’s quite difficult because we must develop and developing can bring some problems,” the teacher said of the smog. Asked about its physical effects, she croaked: “You can hear my throat.”

Those who missed the government’s high-profile announcement of the pollution alert on Monday evening needed only to pick up Tuesday morning’s papers for the gory details.

“The first ever red alert for heavy air pollution,” read the Beijing Times’ front-page headline, pointing readers to an inside spread detailing the city’s latest “airpocalpyse”.

Beneath was an image designed to highlight the Communist party’s determination to crack down on polluters: an environmental inspector using a camera to photograph an oil refinery not far from the capital.

Liao Yuxi, a news stand owner, said the alert had proved a double dose of bad news for his family. Not only had he been unable to send his 10-year-old son to school but newspaper sales were also down as many of Beijing’s 23 million residents avoided venturing out into the foul-tasting murk.

“Business isn’t good,” the 44-year-old said, as his child sat in the corner filling in a colouring book. “I read the papers every day. The government always says it is taking measures. But I haven’t seen any details of them.” 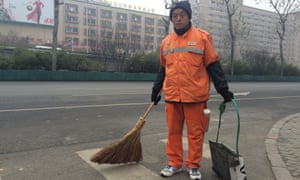 Li Biwen, a 55-year-old street sweeper, said he had no plans to hang up his broom despite the risk the smog posed to his lungs.

“In my village the air is much better,” said Li, who came to the Chinese capital from Sichuan province’s Luozi county almost two decades ago. “[But] in Sichuan I was a farmer. I can make more money in Beijing.”

He said his employers had handed out facemasks when the red alert was announced. “But I don’t want to wear it,” Li said, sweeping cigarette butts from a dust-clogged gutter. “It’s at home.”

Others were making the most of the three-day shutdown, which is set to last until Thursday when rain should clear the smog. 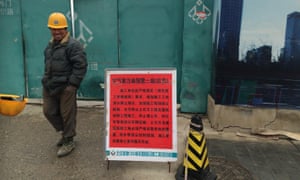 “We’re off today. Everything has stopped,” said Zhang Lijun, a plumber who would normally have been working on one of several skyscrapers being built in the central business district.

In the absence of work, Zhang, 37, was sprawled out in the back of a transit van parked near his building site enjoying a pre-lunch can of Blue Ribbon beer and a cigarette.

But the plumber, who had travelled from the neighbouring province of Hebei to find work, was unimpressed at the suspension. “I don’t think it’s a good thing. If we don’t work we don’t get paid,” said Zhang, who usually receives 200 yuan (£20.70) a day. 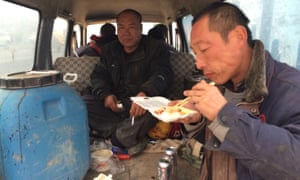 Jin Yingtang, a 44-year-old carpenter, turned up at another construction site to find a red placard informing workers of the shutdown. “Halt all dirt trucks, gravel trucks and other vehicles which are prone to produce dust and smog,” the sign read. “All construction units must stop outdoor work.”

Jin shrugged when asked about the red alert’s impact on his life. “I don’t feel good or bad about it,” he replied. Asked about his plans for his day off, he grinned. “I’ll have a little rest,” he said.

As the pollution levels climbed on Tuesday afternoon, teachers at Baijiazhuang primary school battled to minimise the disruption for their children.

Zhang Guohui, the dean, said staff were using the internet and social messaging networks such as WeChat to help pupils study from home.

Wang said she thought her 35-strong class would take advantage of such methods rather than using the smog as an excuse to slack off. “I believe they won’t just play. They will learn.”

Sat in an office beside the school’s deserted reception, she said her workplace was a lonely one without the boisterous youngsters it was built to educate. “Usually there would be a lot of noise,” Wang said. “But we love to hear them laugh. That’s quite beautiful.”