Living in India’s capital city New Delhi could shorten your life by six years because of the intensity of the air pollution there, a new report showed.

Living in India’s capital city New Delhi could shorten your life by six years because of the intensity of the air pollution there, a new report says.

Inhaling tiny air pollutants reduces the life expectancy of Indians by an average of 3.4 years, with Delhi residents losing 6.3 years, the most of all states, according to a new study by the Indian Institute of Tropical Meteorology.

Those living in West Bengal and Bihar, which have high levels of air pollution, face a reduction in life expectancy of 6.1 years and 5.7 years respectively.

The study, which used data from the latest population census of 2011, found that exposure to particulate matter 2.5 results in 570,000 premature deaths each year with an additional 12,000 caused by exposure to ozone.

PM 2.5 is tiny particulate matter that is smaller than 2.5 micrometers in diameter. The air pollutants, originating from dust, soot and smoke, can penetrate deep into the lungs, increasing the risk of heart and lung diseases.

“This is a point of concern” since the overall average life expectancy in India is already low at 64 years, the study said.

“Future increase in PM2.5 concentration may worsen the situation.”

Sachin Ghude, one of the authors of the study blamed the expansion of industrial, urban, and trafﬁc emissions for significantly increasing air pollution in India over the past two decades. 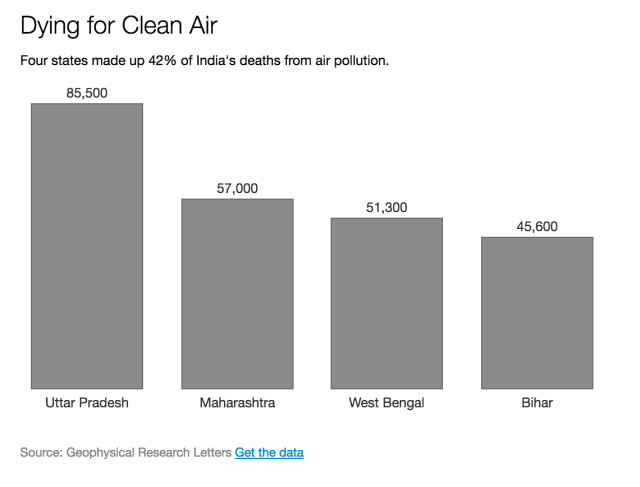 “Upward trends in transportation, industrial and energy sectors, urbanizations, population growth in India along with climate change will raise the levels of O3 and PM2.5 in the future, which could worsen the vulnerability of a growing population,” Mr. Ghude said.

The study found that the northern state of Uttar Pradesh had the highest proportion of deaths due to pollution, making up nearly 15% of the country’s total, while the western state of Maharashtra recorded 10%.

The economic burden of the premature deaths as a result of exposure to air pollutants was about $640 billion in 2011, about 10 times the country’s total expenditure on health during that year, the study said.

Separate research published by the World Health Organization last month revealed that four of the 10 cities in the world with the worst air pollution are located in India. New Delhi has been listed as the 11th worst in the world for air pollution, according to the WHO study.

Source: This Is How Many Years Air Pollution Will Cut From Your Life Expectancy in India – India Real Time – WSJ