Rajshahi: the city that took on air pollution – and won 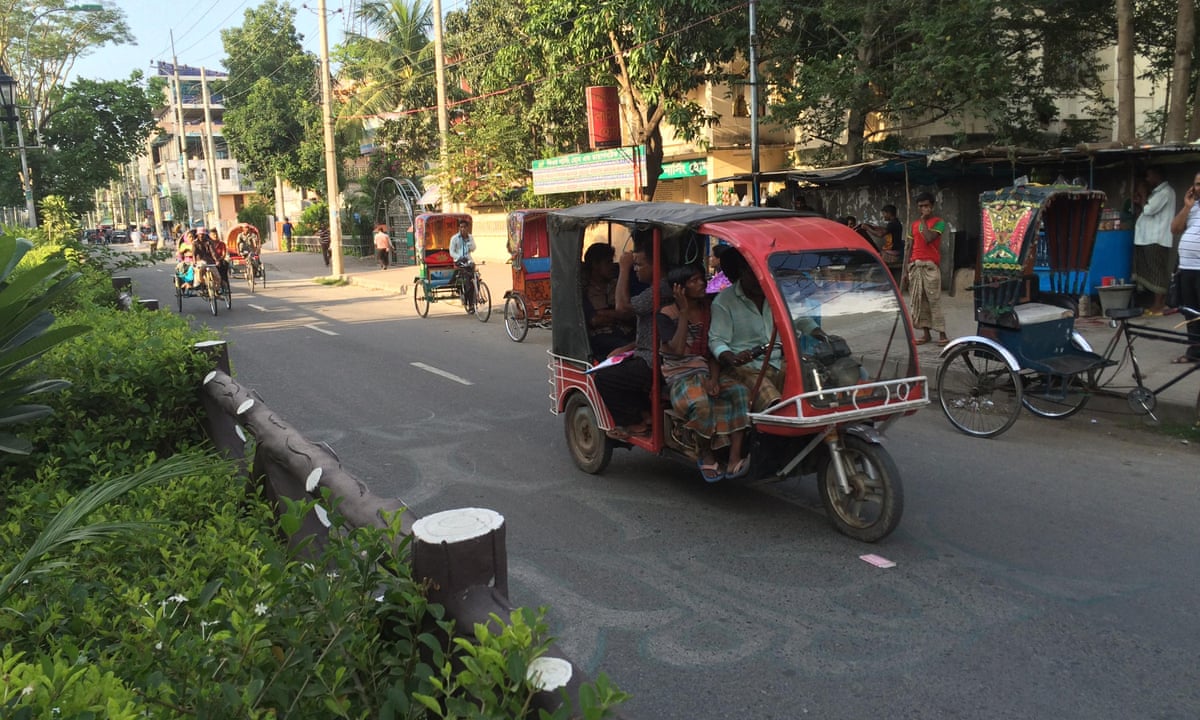 Once, Rajshahi’s sweltering summers were made worse by a familiar problem on the Asian subcontinent: windows would have to be shut, not because of the wind or monsoon, but because of the smog.

Dust blown up from dry riverbeds, fields and roads, and choking smog from ranks of brick kilns on the edge of town helped to secure the place a spot in the top tier of the world’s most polluted cities.

Then suddenly Rajshahi, in Bangladesh, hit a turning point so dramatic that it earned a spot in the record books: last year, according to UN data, the town did more than any other worldwide to rid itself of air particles so harmful to human health.

“We didn’t know about this,” admits Ashraful Haque, the city’s chief engineer, who like some of his fellow residents is rather bemused by the achievement.

Rajshahi does not have a large industrial area, and it is too poor to have streets clogged with cars. Instead, Haque believes it was the campaign to clean up the brick kilns, as well as efforts to make the city greener, that have turned the tide.

Haque, who was born and educated in the city, remembers as a child having to close windows and doors to shut out a thin film of dirt that would settle across every surface in the house when a wind swept in from outside.

Nowadays it’s a different city, thanks to the campaign that began with a tree-planting drive more than 15 years ago, and now encompasses everything from transport to rubbish collection. Dust still hangs heavy in the air on occasions, but the transformation has been welcomed by local residents in a country where urban authorities more often generate frustration and resentment.

“Things have got better for my classmates with asthma,” said Fatema Tuzzohra, a 13-year-old enjoying a riverside park after school. “I love the city, it is really clean and green.”

The city began tackling transport issues in 2004, importing a fleet of battery-powered rickshaws from China, and banning large lorries from the city centre in daytime. The three-wheelers are the main form of public transport, and their batteries keep the air free of the petrol and diesel fumes that hang over other cities.

Upgrades to the brick kilns, such as changing chimneys and fuel, have reduced the amount of pollution they spew out around the city, Haque says. And he has personally designed and overseen a project to make the city centre greener while reducing the amount of dust kicked up by people and vehicles.

“We have a ‘zero soil’ programme in the city, with lots of planting and green intervention. When it works, there should be no part of the road that will be dirt. It will be all grass, flower or pavement,” says Haque.

He became convinced that the city needed more pavements after trips to study urban planning abroad. At the time the asphalt surfacing of the city roads mostly ended in a dusty verge, sometimes with open drains, dangerous and unappealing for walking along, he said.

“In 2010, after a visit to London, I started creating pavements. I couldn’t believe it, everyone has to walk at least 2km a day [in London], but here people finish lunch and look for a rickshaw. Even in the good neighbourhoods, there are no pavements.”

Apart from encouraging a healthier lifestyle, they are vital for controlling dust in the air, he says. “If you have them, no soil will fly during the summer seasons.” So far they have built about 9 miles (15km) of pavements, but soon hope to expand to 30, he said.

The road transformation will go beyond pedestrians this month, when city workers start building the city’s – and the country’s – very first cycle lane.

Take-up is likely to be slow in a city already sweltering in the summer heat, and where the only people on bicycles are those too poor to afford other transport, Haque admits. But inspired by trips abroad, he hopes to sow the first seeds of change.

“I went to the river Thames and saw people riding bikes, I got the idea from Japan and China as well. We don’t have enough land for a separate lane in many places, but where we can we will separate with a border, making a pavement and a cycle lane beside it.”

People are proud of their town, and have started looking after it more closely after the transformation, says restaurateur SM Shihab Uddin, who spent nearly a decade working in Cyprus before returning to open his own chain of eating spots for the growing middle class.

“It has changed so much,” he said. “I came back in 2009, and I was worried that I would find it hard to live here after so much time abroad. But it was already transformed.”

Saad Hammadi contributed to this report.

The small city of Tezpur in east India has traditionally had little to brag about. The holy Brahmaputra river roars at its edges and the mighty Himalayan mountains adorn its skyline, but couched between these geographical marvels, Tezpur itself is little more than a layover stop for travellers in the state of Assam.

But while many of India’s industrial towns have reached peak pollution levels, Tezpur’s air is getting cleaner. Since the last WHO air-quality report in 2014, Tezpur’s PM10 pollution, caused by dust particles, has reduced more than any other Indian city to close to 15% of the level it was.

Tezpur’s air-quality improvement stands out in India, where focus on industrial development and rapid urbanisation in recent years has driven pollution levels up in most other cities. According to the WHO report, six of the 10 most polluted cities in the world are in India, putting millions of people at serious risk of cardiac and respiratory infections.

M Nath, senior environmental engineer at the Pollution Control Board, says Tezpur’s clean air is noticeable to travellers from other cities. “When we have visitors from other cities like Delhi or Guwahati, they immediately feel the difference in the air quality here,” Nath says. “But we’re a small city, we don’t have any major industries that cause a lot of pollution and people are conscious [about the environment]. It may not be so easy in other places.”

It is difficult to single out one reason for Tezpur’s improvement , but Nath explains that heightened awareness means people are making conscious efforts to go green. “People in Tezpur are very conscious about the environment,” Nath says.

Last year, more than 800 trees were planted by students in the city, as part of a massive environmental campaign at Tezpur University.

Activists such as Jadav Payeng, nicknamed “India’s forest man”, have also made significant efforts to improve the environment in regions near Tezpur. For the last 30 years, Payeng has planted a forest’s worth of trees, covering 550 hectares (2.1 sq miles) of land.

Industrial efforts to cut back on coal-powered machines have also helped significantly. “The supply of liquefied petroleum gas [LPG] has improved a lot, and so many tea plantations are using it now,” he says. LPG is produced from fossil fuels, but produces virtually no particulate pollution compared with burning coal.

Assam’s hundreds of plantations produce nearly 700,000kg of tea a year, mostly exported around the world. Until recently, many of them depended solely on coal to fuel their machines.

Nath says LPG has now reached even more remote village areas near Tezpur. Access to LPG and subsidies from the government have prompted many villagers to use cleaner fuel for cooking and burning waste. “People don’t need to use wood fires any more; most of them have access to LPG.”

Sanjiv Eastment, a manager for McLeod Russel, the world’s biggest tea producer, says he can feel the improvement in air quality since the company started using LPG in their incinerators. “Not just outside, you can feel it in the factory itself,” he says. “There’s no more dust, no more breathing problems.”

Eastment estimates that better technology and more easily available LPG have saved thousands of tonnes of coal in recent years. “We make around 100m kilos of tea a year, and for each kilo of tea we burn around 1kg of coal. But it used to be much more – 1.6, 1.8 kilos a few years ago. Now we have new boilers that are more energy efficient and our incinerators are fuelled by LPG,” he says. “We still need to use coal for our tea dryers though.”

According to Eastment, the company switched from coal to LPG because it was cheaper. “After all we’re in the business of tea to make money,” he says.

Strong regulation and demands from foreign countries to meet production standards have also contributed to the change. Foreign countries have become less willing to accept tea imports unless they are certified by the Rainforest Alliance. “It means that all open fires have stopped – even in the workers’ quarters, to cook or burn waste,” Eastment says. “That makes a really big difference.”

For Nath though, it is adopting the right attitude to the problem that is key. The Pollution Control Board has run campaigns in schools and villages to encourage people to adopt greener lifestyles. “People have been very enthusiastic,” Nath says. “They are really proud about the environment here … We look after our city.”

Source: Rajshahi: the city that took on air pollution – and won | World news | The Guardian