Ship traffic is often overlooked compared to smog-producing cars and factories, but it has more than doubled off east Asia since 2005 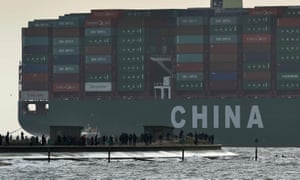 A boom in shipping is aggravating air pollution in China and other nations in east Asia, causing thousands of deaths a year in a region with eight of the world’s 10 biggest container ports, scientists have said.

Ship traffic, often overlooked compared to cars and factories that are far bigger causes of smog, has more than doubled off east Asia since 2005 and some pollution from the fuel oil of ships wafts inland, scientists said on Monday.

The Chinese-led study estimated that sulphur dioxide, which generates acid rain, and other pollution from ships caused an estimated 24,000 premature deaths a year in east Asia, mainly from heart and lung diseases and cancer.

About three-quarters of deaths were in China, and others mainly in Japan, Taiwan, Hong Kong, Macau and South Korea, according to the study published in the journal Nature Climate Change based on satellite data-tracking of almost 19,000 vessels.

The death toll is a tiny though rising share of an estimated one million deaths caused annually by air pollution in east Asia, the study found. Given many uncertainties, the number of deaths could be as low as 14,500 or as high as 37,500, it said.

“A few years ago in east Asia the levels of shipping just weren’t that large. Now they’re huge,” Drew Shindell, one of the study’s authors at Duke University in the United States, told Reuters.

China’s Shanghai container port is the world’s busiest and China will start to demand cleaner fuels for ships in coastal regions from 2019. Thousands of protests are sparked every year in China as a result of concerns about environmental degradation.

North America and parts of Europe already require that ships operating close to land use more costly, less polluting fuel with a sulphur content below 0.1%. The US Environmental Protection Agency expects the North American controls will prevent 14,000 premature deaths a year by 2020.

Worldwide, the UN’s International Maritime Organisation (IMO) plans to cut the sulphur limit for ships’ fuel to 0.5% from 2020 from a current 3.5%.

The curbs could be delayed to 2025 if member states decide that refineries are unable to adapt in time. Natasha Brown, an IMO spokeswoman in London, said a decision is due in October.

The study also found that emissions of carbon dioxide, the main manmade greenhouse gas, from shipping off east Asia had doubled in less than a decade to 16% of the industry’s global total in 2013.

Other air pollutants from ships have a cooling effect on global climate, however, by reflecting sunlight into space. The cooling is likely to predominate for about another eight years before warming takes over, it said.