As Iraqi forces fight to retake Mosul from the so-called Islamic State (ISIS), clouds of toxic fumes are spreading across northern Iraq.

The acrid smoke, which is so significant it is visible from space, is threatening to harm Iraqis’ health just as hundreds of thousands of people are fleeing Mosul for their lives.

Militants from the Islamic State blew up the Al-Mishraq sulfur processing plant over the weekend and set fire to 19 oil wells in an effort to hamper the advance of Iraqi and U.S. forces.

Large concentrations of sulfur dioxide can permanently damage the respiratory system and make breathing difficult. Depending where it is located in the atmosphere, sulfur dioxide can also contribute to acid rain and act as a temporary cooling influence on the climate. 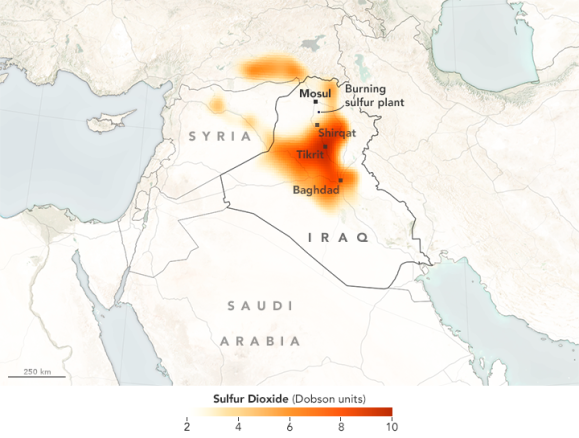 According to Al-Jazeera, at least two Iraqi civilians have died from toxic fumes, and nearly 1,000 people were being treated for breathing problems as of Oct. 22.

NASA said the sulfur dioxide was initially in lower parts of the atmosphere, but shifting winds pushed it higher, enabling the particles to travel longer distances.

The agency’s ozone monitoring equipment detected two streaks of plumes. The white-gray streak, from the sulfur plant, is rich with sulfate aerosols and droplets of light-reflecting sulfuric acid. Black plumes from the Qayyarah oil field are rich with black carbon and other light-absorbing aerosols.

ISIS has ruled Mosul, Iraq’s second-largest city, for more than two years. The push to retake Mosul from the militants is the largest operation launched by Iraq since the U.S.-led invasion in 2003.

The Al-Mishraq sulfur facility was also set ablaze that year. The fire, which burned for nearly a month, release some 21 kilotons of sulfur dioxide per day, according to NASA satellite data gathered in 2003.

U.S. soldiers exposed to the fire suffered serious lung damage. Nineteen personnel had open lung biopsies and were diagnosed with constrictive bronchiolitis, a disease similar to asthma that restricts the airway, the Department of Veterans Affairs said in 2010.

NASA has not yet calculated the total output of this month’s toxic fires near Mosul, a city of more than a million. But the agency said the sulfur dioxide emissions have already been significant.

Simon Carn, an atmospheric scientist at Michigan Technological University, said that if the sulfur dioxide was coming from a volcano rather than a fire, it would already be among the largest volcanic eruptions of 2016, he noted in an Oct. 25 tweet. 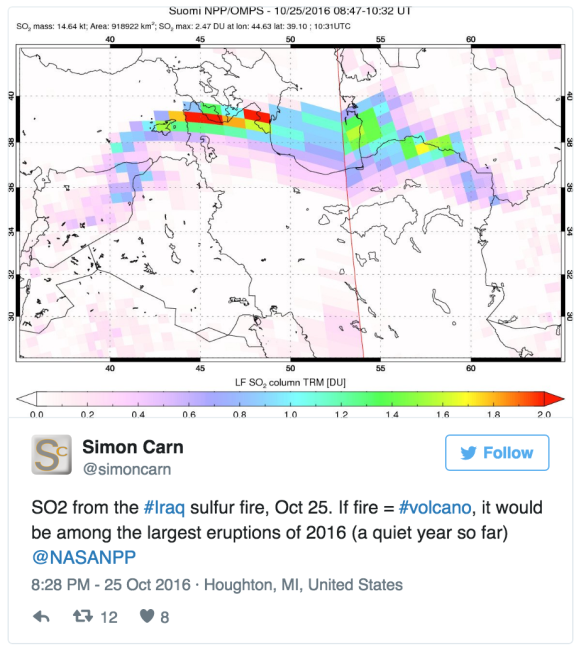 The World Health Organization said Wednesday that 700,000 people were expected to flee Mosul as Iraqi forces continued their advance, a battle that is expected to take weeks, if not months.