World pollutionwatch The ban on diesel cars in Athens and Thessaloniki has been lifted and the price of heating oil has tripled. Hard-pressed Greeks have turned to burning logs – and other things 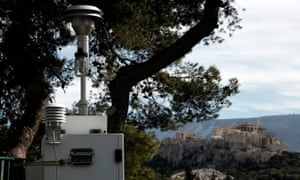 Greece’s financial recession is leaving its footprint on the environment. This follows twenty years of huge improvements in Greece’s air pollution. While most European countries struggle with the consequences of failure to control exhaust pollution from diesel vehicles, Greece benefitted from long-standing bans on diesel cars in the two biggest cities, Athens and Thessaloniki.

This allowed the country to reap the full benefits of technologies to control petrol exhaust, without these being offset by the poor performance of diesel cars. As a consequence nitrogen dioxide from traffic approximately halved alongside Greek roads between 1996 and 2006, in contrast to the lack of improvement elsewhere in Europe.

Lifting the diesel car ban in 2012 and lower taxes on diesel fuel acted as a huge incentive for those struggling with travel costs. Amongst new car sales diesels leapt from less than 20% (around zero in Thessaloniki) to over 60%, but, so far, economic pressures have reduced traffic volumes averting a possible deterioration in air pollution.

However, a tripling in the cost of heating oil brought about larger changes as hard-pressed Greeks have switched to burning wood. Wintertime particle pollution increased by around 30% in Thessaloniki in 2013 and air toxicity worsened on evenings when fires were lit. Analysis of wintertime air in Athens shows that it is not just logs that are being burnt. Along with chemicals from wood burning, scientists found lead, arsenic and cadmium particles, showing that people are burning painted and treated wood, and also their rubbish, to keep warm.