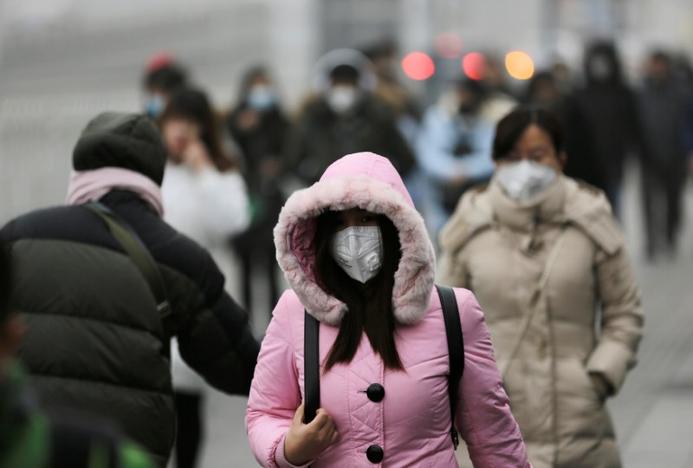 Heavy smog that blanketed parts of China at the weekend cleared somewhat on Monday, with flights in Beijing back to normal, but it was likely only to be a brief respite with more choking smog expected to return to the wintry north within 24 hours.

Weather forecasts on Monday showed the smog would return to Beijing and nearby Tianjin city from Tuesday. It was expected to persist until Thursday in Hebei, the heavily industrialised province that surrounds the capital, and Henan and Shandong provinces as the region battles freezing temperatures.

Severe pollution is forecast to persist in the region for three to seven days, the official Xinhua news agency reported.

Authorities have been issuing smog alerts across the north since mid-December, prompting orders for hundreds of factories to scale back production or close outright and for restrictions on motorists to cut emissions.

Pollution alerts are common in northern China, especially during winter when energy demand, much of it met by coal, soars.

A pollution index that measures the average concentration of small breathable particles, known as PM2.5, dropped to just over 100 micrograms per cubic metre in Beijing early on Monday from more than 500 on Sunday night.

The safe recommended level of PM2.5 is 10 micrograms per cubic metre, according to the World Health Organization.

A customer service staff member at the Beijing Capital International Airport said flights were returning to normal. Smog on Sunday caused hundreds of flights to be cancelled and highways to shut, disrupting the first day of the New Year holiday.

On Monday, the Beijing government maintained its orange alert for heavy pollution and a ban on heavy-duty construction trucks from using the roads.

An orange alert is the second-highest level in a four-tier pollution warning system adopted by Beijing when China, worried that its heavy industrial past was tarnishing its global reputation and holding back development, declared a “war on pollution” in 2014.

Despite that declaration, public anger is mounting about pollution and what many Chinese see as government talk, but little action, to end it. That anger has occasionally spilled over into protests.

Some highways to Beijing and Tianjin were re-opened as motorists headed home at the end of the long weekend, state television reported later on Monday.

State television also reported that some factories in Hebei province’s heavy industry hub of Tangshan, including a coal-fired power plant of Datang Power International, and several steel mills, were found to be violating the curb on operations.

The latest bout of air pollution began on Friday. China has struggled to tackle the problem effectively after decades of breakneck economic growth, much of it based on heavy industry and the coal-fired power sector.