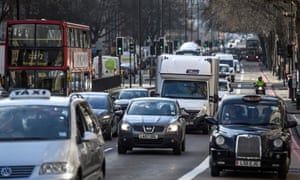 Tens of thousands of children at more than 800 schools, nurseries and colleges in London are being exposed to illegal levels of air pollution that risk causing lifelong health problems, the Guardian can disclose.

A study identifies 802 educational institutions where pupils as young as three are being exposed to levels of nitrogen dioxide that breach EU legal limits and which the government accepts are harmful to health.

The research, commissioned by the mayor of London, Sadiq Khan, suggests thousands more children and young people are at risk from toxic air than previously thought.

Khan said the results were devastating and warned that it was the capital’s poorest children who were bearing the brunt of the air pollution crisis.

“It is an outrage that more than 800 schools, nurseries and other educational institutions are in areas breaching legal air pollution limits,” he said.

“This is an environmental challenge, a public health challenge but also – and no one talks about this – it is fundamentally an issue of social justice. If you are a poor Londoner you are more likely to suffer from illegal air.”

Khan called for the government to introduce a clean air act and for a diesel scrappage scheme to take polluting cars off the road quickly. 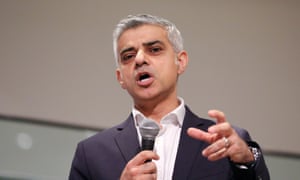 The results show nearly double the number of schools than previously thought are affected by illegal levels of toxic air. A report that was kept secret by former mayor Boris Johnson revealed last year 433 primaries were exposed to dangerous levels of air pollution.

The new data shows 802 out of 3261 nurseries, primary and secondary schools and higher education colleges, are within 150 metres of nitrogen dioxide pollution levels that exceed the EU legal limit of 40µg/m3 (40 micrograms per cubic metre of air).

Traffic is a major contributor to air pollution and there is growing concern about emissions from diesel vehicles, which contribute through the production of particulate matter and nitrogen oxides (NOx).

Dr Francis Gilchrist, consultant respiratory paediatrician at Royal Stoke University hospital, said it was known that children were particularly sensitive to air pollution and that lung damage had lifelong consequences.

“If something is not done about air pollution these issues are going to get worse and worse. There is definitely concern that air pollution is affecting children’s lungs – in particular it exacerbates respiratory illness, like asthma, and it predisposes children who are healthy to having repeated chest infections,” he said.

“If you damage your lungs in childhood you are likely to see these effects right through into adulthood, so there is a lifelong impact.”

Khan hopes the introduction of what he says is the world’s first ultra-low emission zone will cut toxic NO2 emissions from diesel vehicles by 50%. He plans to extend the zone to the north and south circular roads in the capital and has brought its introduction forward a year to 2019.

Last week he announced that drivers of older, more polluting cars will have to pay a £10 charge to drive in central London from October.

But other cities – including Paris, Athens and Madrid – have announced more dramatic measures, introducing car-free days and bans on diesel cars from city boundaries.

Khan said he had not ruled anything out. “We are evaluating the success of other cities. We are looking at their plans and nothing is off the table. But at the moment we think our plans are the most effective.”

London is not alone in the UK in facing an air pollution crisis. Khan and the leaders of four other cities badly affected by poor air quality – Leeds, Birmingham, Derby and Nottingham – had written to the government calling on them to do more to tackle the problem across the UK.

“It must be the case that air quality in other cities is having a similar impact and that it is worse in the most deprived parts of those cities. It must impact on schools in the same way, but they do not have the information that is now available in London. The government must take action,” he said.

The modelling is more precise than the government’s measurements, which the high court has condemned as overoptimistic.

Judges told ministers last November they must cut the illegal levels of NO2 in dozens of towns and cities in the shortest possible time after ruling their plans to improve air quality were so poor they were unlawful.

The government has until April to come up with proposals to bring before the court.

The study adds to the pressure on ministers to tackle air pollution amid growing evidence of a toxic air crisis in parts of the UK. London breached its annual air pollution limits just five days into 2017.

This year Khan gave £250,000 to fund 50 air quality audits at the worst affected primary schools. The money will allow schools to work with local councils to introduce measures to protect pupils from toxic air and could include banning the most polluting cars at drop-off and pick-up time, clean air routes for walking to school, green barriers and moving entrances away from busy roads.

Air pollution causes up to 50,000 early deaths – 9,000 of these in the capital – and costs the country £27.5bn each year, according to a government estimate. MPs have called it a public health emergency.

Khan is calling for ministers to introduce a comprehensive diesel scrappage scheme to compensate drivers who bought diesel cars after being told they were more environmentally friendly than petrol vehicles. He also wants the government to introduce a clean air act “fit for the 21st century”.

“I want London to be the envy of the world in relation to air quality, to be the greenest city in the world.”

‘Some days it makes me consider leaving London’

The playground at Tachbrook nursery school in Pimlico, west London, has lots to keep a three-year-old happy at breaktime.

But, like other schools highlighted in the report, it is very close to a busy main road. HGVs, cars, taxis and buses plough up and down the Embankment nearby, and so the school is subject to NO2 pollution levels above EU legal limits.

Headteacher Elizabeth Hillyard said she had signed a petition along with other headteachers in the capital urging more to be done about toxic air.

“Air pollution has bad effects on health and it needs to be addressed and all the heads in Westminster have signed the petition,” she said.

Like other schools, Tachbrook does what it can to protect children, including having a fence around the playground. Kate Lyons, a parent collecting her three-year-old son, said the issue was a concern.

“We are generally concerned about the air in this area,” Lyons said. “You can feel it and taste it. My little boy loves playing in the playground at school, and it does worry me.

“We live nearby and sleep with our windows closed because of the pollution. We used to live in Edinburgh and you can feel the difference living here in London and some days it is something that makes me consider leaving.”