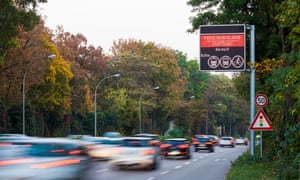 On a frosty Friday evening at the end of January, after her usual walk around her central Stuttgart neighbourhood, Susanne Jallow felt an unusual cough and irritation in her throat.

Jallow, 54, lives in Neckartor, an area chock-a-block with residential buildings hugged by a busy road, B14, which handles around 100,000 vehicles a day.

Neckartor is a hotspot for air pollution, not just in Stuttgart but in the whole of Germany. PM10 values (coarse dust particles between 10 and 2.5 micrometres in diameter) recorded on sensors installed in the busy intersection of B14 often hit around 200 micrograms per cubic metre (µg/m³). EU standards set the top limit of safe PM10 levels at 50µg/m³.

On this particular evening, however, Jallow came home and checked the readings on a sensor hanging from her balcony, provided to her as part of an open data citizen initiative called Luftdaten (“air data”), and found that it had recorded 300µg/m³.

Keen to draw attention to the scale of Stuttgart’s problem, Jallow and her neighbour Peter Erben – both members of local citizens’ forum BI Initiative – lodged a criminal complaint on 23 January against the city’s mayor, Fritz Kuhn, and the district president, Wolfgang Reimer. The complaint accuses the officials on two counts: bodily injury with death as a consequence (due to air pollution), and lack of assistance.

The issue was immediately picked up by local media. “We wanted to highlight the bureaucratic apathy of the city administration. There is a pressing need for more proactive measures to combat air pollution. The existing ones are inadequate,” says Erben.

He suspects other neighbourhoods in Stuttgart are just as in danger of air pollution from PM10 and nitrogen dioxide as Neckartor is. “Right now, the official explanation is that only Neckartor suffers from bad air in all of Stuttgart. I don’t necessarily think that is true.”

Popular resistance to air pollution in Stuttgart has been ongoing for more than a decade. In the autumn of 2004, two of its citizens approached the court seeking redressal from air pollution and fine particulate matter. The government reacted by introducing a truck transit ban that did little to control PM levels. In 2008, a Neckartor resident filed another lawsuit – and the court, in its ruling, noted that no effective measures had been taken to address the city’s poor air quality.

The concept of Feinstaubalarm (“fine particulate matter alarm”) was introduced in January 2016 to mark the days when the city’s air pollution exceeds EU limits. On these days, the city administration urges residents to stop using their wood-fired chimneys and utilise public transportation rather than cars – tickets are reduced to half price as an incentive.

“Combustion residues, mainly from diesel engines, as well as the abrasion of brakes and tyres, are the main reasons for these high PM10 values,” says Dr Ulrich Vogt, head of the Department of Air Quality Control at Stuttgart University. 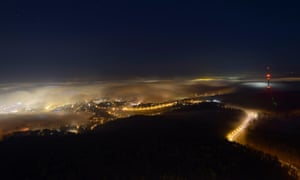 One reason for Stuttgart’s heavy traffic is that it doesn’t possess any ring roads, so much of the traffic passes straight through the city. In contrast, Munich has three ring roads.

“Another reason we have such a high concentration [of air pollution] is that everything is very, very densely populated,” Vogt says. “Stuttgart west has the highest population density in Europe. There are no broad avenues here, only narrow street canyons.”

But the problem is also geographical: Stuttgart’s city centre is located in a basin, surrounded by mountains on three sides. “We do not have good ventilation and hence no way of diluting the air pollutants,” Vogt adds.

Winter brings further weather-related issues: “We are now experiencing a phenomenon called temperature inversion. It acts like a lid, trapping cold air in the ground without allowing for exchange,” explains Dr Ulrich Reuter, an environment counsellor with Stuttgart’s Office of Environmental Protection.

From Reuter’s office window on a late January afternoon, the city’s landmark Fernsehturm (TV tower) is shrouded in thick smog. “I hope it will be possible to bring down the pollution levels,” he says. “But I’m afraid it’s not possible without restrictions.”

“The politicians are satisfied with Feinstaubalarm without considering any other action,” says Jallow. “Why can’t we have a ban on vehicular traffic on pollution days, like Paris and Madrid?” 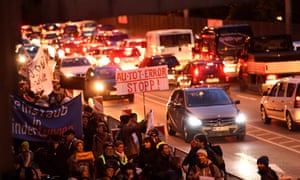 But such a ban would be controversial in the industrial city home to major manufacturers including Porsche, Daimler and NeoPlan (the maker of Man buses and trucks).

“I think it would be fatal,” Thomas Bareiss, the commissioner for energy policy, told a local newspaper. “Even the discussion about driving bans will lead to the destruction of [Stuttgart]. There are more intelligent ways to tackle the fine dust problem.”

But according to Julia Pieper, a spokesperson for the Ministry of Transport for the state of Baden Württemberg, of which Stuttgart is the capital, traffic restrictions are being considered for next year.

“In the eventuality that the 2017 limit values are not met, traffic restrictions on individual days are planned for the year 2018,” Pieper told the Guardian. “In doing so, the affected area is kept as small as possible.”

In the month of January alone, the city experienced around 25 of the acceptable 35 Feinstaubalarm days – so restrictions look certain to be introduced next year.

The grubby, soot-laden walls of the grand old houses that sit along B14 in Neckartor bear the tell-tale signs of air pollution.

“You can only imagine what the lungs of people who live inside those houses look like,” says Erben, rubbing his fingers across the soot. An acrid smell hangs heavily in the air, resulting from the emissions let out by the cars hurtling past the busy intersection.

Experts such as Vogt and Reuter agree a reduction in car traffic is the most effective measure for improvement of air quality. “Every microgram per cubic metre of PM10 is unhealthy,” Vogt says. “So there is no threshold value or lower limit [of acceptability].”

There is certainly growing awareness of the issue among Stuttgart residents. Luftdaten is in the process of installing low cost, crowdfunded sensors across the city to measure PM levels, much like the one on Jallow’s balcony.

“I wanted to build cost-effective sensors, given the less than reliable government data and coverage regarding air pollution,” explains Jan Lutz, a social entrepreneur who runs Luftdaten’s website.

“But I think in five years Stuttgart will be like Detroit or something, because there is simply no innovation,” he adds. “The automobile industry continues to produce more cars, which is basically two tonnes of steel transporting a 70kg human. It’s an overkill, and not sustainable in the long run.”