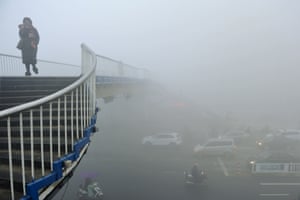 Climate change played a major role in the extreme air pollution events suffered recently by China and is likely to make such “airpocalypses” more common, new research has revealed.

The fast-melting ice in the Arctic and an increase in snowfalls in Siberia, both the result of global warming, are changing winter weather patterns over east China, scientists found. Periods of stagnant air are becoming more common, trapping pollution and leading to the build up of extreme levels of toxic air.

The work is the latest to show that changes in the rapidly warming Arctic are already leading to severe impacts for hundreds of millions of people across North America, Europe and Asia. The US has also seen a rise in episodes of stagnant air, which may be leading to higher air pollution there.

“The very rapid change in polar warming is really having a large impact on China,” said Prof Yuhang Wang, at Georgia Tech in the US, who led the new research. “Emissions in China have been decreasing over the last four years, but the severe winter haze is not getting better.”

“Mostly that’s because of a very rapid change in the high polar regions where sea ice is decreasing and snowfall is increasing,” he said. “This perturbation keeps cold air from getting into the eastern parts of China, where it would flush out the air pollution.”

The new research is convincing, according to Prof Jennifer Francis, at Rutgers University in the US, who said people should be concerned at the growing evidence that the thawing Arctic is having major consequences further south. “Not all the impacts of a melting Arctic are bad – such as taking the edge off of winter cold snaps – but most of the effects will have a negative impact on the billions of people living in temperate regions,” she said.

Air pollution causes 1.4 million early deaths every year in China and the “airpocalypse” in 2013, when levels soared to 10 times national limits, grabbed global attention. The US embassy had been tweeting data on the “crazy bad” air, which led the Chinese government to open up its reporting and then to crack down on pollution later in 2013.

However, despite cuts in emissions helping clear the air in summer, the winter haze remained a serious problem, leading Wang’s team to investigate. Their research, published in the journal Science Advances, found that periods of stagnant air over east China correlated closely with years of very low Arctic ice and high snowfall in Siberia.

They then used climate models to show that these changes in the Arctic could cause domes of high pressure in the region, under which low winds meant air pollution builds up instead of being blown away.

The 2013 “airpocalypse” followed the record low Arctic ice in late 2012 and record high snow in northern Siberia. Arctic ice plunged to its second lowest extent in late 2016 and China was again hit with an extreme air pollution event this winter. “2013 was off the chart” in terms of poor ventilation conditions over east China, said Wang. “And the winter of 2016-17 was nearly as bad.” 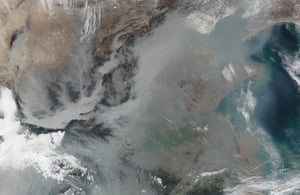 The researchers concluded that “extreme haze events in winter will likely occur at a higher frequency in China” as climate change continues to heat up the Arctic. Wang said this should drive an increased urgency in cutting both air pollution and the carbon emissions that cause global warming.

The emissions of greenhouse gases from human activity is responsible for at least half, and possibly up to two-thirds, of the fall in summer sea ice in the Arctic since the late 1970s, according to recent research.