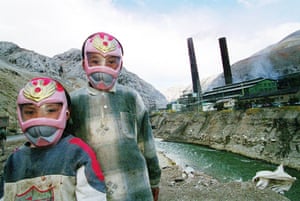 It’s a fairly common tactic in Peru to issue a significant or potentially controversial decision or resolution when you hope no one is paying attention. 24, 26 or 31 December, for example. The Environment Ministry (MINAM) recently adopted that ploy by releasing, just before the Easter week holiday, proposals to dramatically roll back certain air quality standards across the country.

The draft National Environmental Quality Standards for Air propose maintaining the maximum legal limits for nitrogen dioxide, carbon monoxide, hydrogen sulphide, lead and benzene, but doubling the limit for some particulate matter. Most startling, they propose increasing the limit of sulfur dioxide by more than 12 times.

MINAM effectively claims that Peru is the global leader in sulfur dioxide limits because it is the “only country in the world” which meets World Health Organisation (WHO) recommendations. That limit is 20 micrograms per cubic metre over a 24 hour averaging period, compared with 210 in Australia, 250 in Chile and Colombia, 288 in Mexico, 300 in Canada and 365 in Brazil, according to the ministry. Elsewhere in the world – although these are not acknowledged by MINAM – the limit is 150 in China, 125 in the EU, 131 in South Korea and 80 in India.

The current proposal is to raise Peru’s limit to 250. One justification is that “no clearly defined link exists” between sulfur dioxide and negative impacts on human health, MINAM claims, according to its interpretation of research by the WHO, the US’s Environmental Protection Agency and Health Canada, among others.

Further justifications are that no other country in the world has a limit as stringent as 20 and adopting it was a mistake out of touch with “national reality.” It isn’t being complied with, the ministry argues, and therefore undermines the public’s faith in government and the law.

“[The 20 limit] was adopted in a very short timeframe without a solid technical and economic argument and without considering sustainable development policy that involves taking acceptable risks to public health while at the same time introducing effective strategies to reduce environmental contamination,” MINAM states.

The ministry’s proposals have met with serious concern and criticism from Peru’s Congressional Commission on the Environment, Ecology and Andean, Amazonian and Afroperuvian Peoples, NGOs, and many others. Lima-based APRODEH and the Interamerican Association for Environmental Defense (AIDA) say that MINAM is ignoring scientific evidence of the “serious health harms” caused by both sulfur dioxide and particulate matter. These include lung problems and premature death – with children, the elderly and people with asthma being particularly vulnerable.

“There is overwhelming scientific evidence to conclude that sulfur dioxide pollution poses a serious health risk, particularly when the contamination reaches high levels over short periods of time, something the proposal does not take into account,” says AIDA’s co-director Anna Cederstav in a joint statement with APRODEH.

Both organisations argue that MINAM’s proposals violate the American Convention on Human Rights and other international treaties binding on Peru. In addition, the public consultation was “flawed”, they state, with too little time for discussion and the scientific basis for the proposals not made public.

That opinion is shared by the Congressional Commission on the Environment, which has written to Environment minister Elsa Galarza requesting a further 30 days for the public consultation process. The Commission is presided by Maria Elena Foronda, who has taken the lead in drawing public attention to the issue.

“In the Commission’s view any law that would reduce environmental quality standards requires a responsible and timely technical evaluation, as much by members of congress as civil society,” Foronda says. “It’s appropriate to point out that MINAM is trying to establish parameters that are weaker than those recommended by the WHO.”

Other NGOs like Red Muqui and the Sociedad Peruana de Derecho Ambiental (SPDA) have also issued critical statements. SPDA argues that the government is legally prohibited from weakening environmental standards, that MINAM failed to provide sufficient justification for its proposals, and that the WHO, contrary to the ministry’s interpretations of its research, has proved that sulfur dioxide negatively impacts human health.

According to Red Muqui, a collective of 29 organisations across Peru, the proposals are “regressive” and ignore WHO recommendations. MINAM failed to coordinate with the Health Ministry, they argue, and the timeframe for public discussion was too short.

“Life and health shouldn’t be dependent on economic interests,” Red Muqui states. “[The proposals] fail to consider that particulate matter is very fine and can easily penetrate respiratory tracts and blood, increasing the risk of morbidity and premature death following short- and long-term exposure.”

So why propose raising the legal limits? According to AIDA, APRODEH and anyone else following the issue, the answer is an infamous poly-metal smelter in a town in Peru’s central Andes, La Oroya, which 10 years ago was named as one of the top 10 most polluted places on earth by the US-based Blacksmith Institute.

Formally called the Metallurgical Complex of La Oroya, the smelter has been the property of Doe Run Peru since 1997, and ultimately under the control of the US’s Renco Group. It closed in 2009 and partially re-opened in 2012. Now it is administered by liquidators – and Peru’s sulfur dioxide limits are reported to be scaring off potential investors.

This is despite the fact that La Oroya has been exempted from the national 20 limit. In recent years it was raised to 80 and then to 365 for a 14 year period until it is scheduled to revert to 80 again, according to APRODEH’s Christian Huaylinos. He told the Guardian that MINAM’s proposals are “completely connected” to the proposed Doe Run Peru sale.

“[In the long-term the limit] continues being 80, which is a very demanding standard that I imagine has discouraged possible bidders for Doe Run Peru, given that it would require serious investment in new technology,” Huaylinos says. “So that’s where the issue of relaxing the standards comes in. Now they would no longer have to adjust from 365 to 80, but 365 to 250.”

Tenders have been held for Doe Run Peru as recently as March this year, but no offers were reportedly received. “Now, given the lack of offers, MINAM has put forward a law to relax the limits, the aim of which is to facilitate the next tender round,” Huaylinos told the Guardian. “[This would seriously affect] the rights to health and clean environment of the people living in La Oroya.”

On Friday Gestion newspaper stated that potential bidders for Doe Run Peru have been lobbying for changes to the sulfur dioxide limits – something that the Congressional Commission on the Environment has noted too. Pablo Peschiera, from DIRIGE, the liquidators, reportedly said that the next tenders will be held in July and MINAM’s proposals would save investors huge sums.

“Under the previous [current] standards an investment of US$788 million [in the smelter] had been foreseen, and even then there was no guarantee of meeting the 80 standard,” Peschiera was quoted as saying in Gestion. “There was a low probability of complying even after making that investment. Now [if MINAM’s proposals are approved], with the limit being 250, the amount needed to invest will be lower.”

Liliana Carhuaz, an Oroya resident and member of the Movimiento por la Salud de La Oroya (MOSAO), told the Guardian she rejects MINAM’s proposals and believes the sulfur dioxide limit should be 20. She said that local people didn’t agree with the suggested changes either, and she cited respiratory problems and lead poisoning as ongoing health impacts.

“After so many years of contamination in La Oroya [the ministry’s proposal] to increase the permitted levels is not just,” she says.

Last year, just before the end of the previous government, MINAM published a dossier on Doe Run Peru which included six reasons why air quality standards shouldn’t be weakened, although it acknowledged that the contamination in La Oroya was so severe that it would be impossible for the smelter to ever meet any standards, no matter how “flexible.” The dossier cited Health Ministry statistics from 2007 saying that during some hours the sulfur dioxide levels reached 28,300 and average daily emissions were over 2,000 – which MINAM alleged was one of the reasons why Doe Run Peru hadn’t yet been sold.

“It’s clear that with daily emissions and yearly averages such as these, La Oroya, if its copper circuit is working, wouldn’t even comply with the most flexible environmental standards in the world,” stated the dossier, dated July 2016.

Mariano Castro believes that this is a key weakness of MINAM’s proposals: there are no limits for short periods of time – just one hour or three hours – which would prohibit severe peaks in contamination. In Colombia, he says, the limit for 24 hours is 250, as proposed for Peru, but crucially there is also a limit for three hours set at 750.

“Without this [750] limit on short-term peaks, you could get up to levels around 2,000 for several hours over a 24 hour period and never exceed the daily limit,” Castro told the Guardian. “The dangers to human health and the environment would be irreversible. Under no condition should an increase in the 24 hour limit be permitted if an appropriate limit for just one hour is not established, as in other countries.”

Fernando Serrano, a scientist at Saint Louis University in the US who has conducted research in La Oroya and testified before US Congress about it, agrees with Castro. “The proposed new air standards for sulfur dioxide don’t include a hourly standard and therefore don’t hold the smelter responsible for the hourly peaks that are far greater than anything that is acceptable,” he says. “The most effective way to protect people’s health and environmental quality is to reduce smelter emissions through technical measures and to enact and enforce air quality standards and other regulations that prevent health and environmental risks.”

Serrano describes the La Oroya smelter as for years “serving a toxic cocktail of metals” including lead, cadmium, arsenic and air pollutants like sulfur dioxide. “This mix of contaminants has gravely affected the health of the people of La Oroya and surrounding areas,” he told the Guardian. “The only time people enjoyed a cleaner and safer environment – low sulfur dioxide levels, decreasing blood lead levels – is when the smelter closed, which shows that it is the primary source of contamination.”

The appalling health impacts of the smelter on La Oroya’s inhabitants have been reported for many years, with the government concluding almost two decades ago that more than 99% of children living nearby suffered from lead poisoning. A series of legal actions have been taken against the Health Ministry in Peru, against the Peruvian state at the Inter-American Commission on Human Rights, and against Doe Run in the US.

Peru’s Congressional Commission on the Environment is scheduled to discuss MINAM’s proposals tomorrow, 2 May, and has requested Environment minister Galarza to attend.

MINAM did not respond to questions.