Besides chemical pollutants, particulate matter is also above the standard level prescribed by the Central Pollution Control Board.

In an alarming revelation, the Pune Municipal Corporation’s environment status report (ESR) 2016-17 claimed that Hadapsar has been recorded as one of the most polluted regions in the city followed by Navi peth.

PMC’s environment status report 2016-17 shows that air pollutants like Nitrogen Dioxide (NO2), Nitrogen Oxide (NO) and particulate matter were seen to have crossed the standard permissible limit set by the Central Pollution Control Board.

As per the data released by Pune Municipal Corporation, the areas where Nitrogen Oxide was found to have been above the average level includes Hadapsar, Navi peth and Mandai. The standard permissible limit for Nitrogen Oxide is said to be 40ug/m^3 (micrograms per cubic metre of air) while in Hadapsar area it is found to be 60ug/m^3. 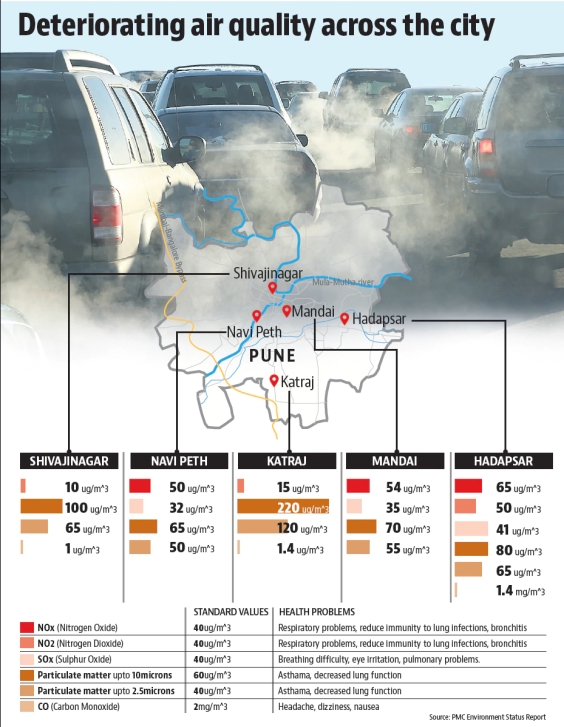 Apart from this, Nitrogen Dioxide, too, is found to be above the standard permissible level in areas including Pashan, Lohegaon, Shivajinagar, Katraj and Hadapsar. This increase in Nitrogen Dioxide was recorded especially during the month of November.

According to the report, the other important factor which is above the standard average level is the dust particulate matter present in the air.

The report states that dust particles of up to 10 microns and 2.5 microns are found to be more in the air. The report added that even as their levels were found to be decreasing since 2011, they are still above the standard permissible level laid down by the Central Pollution Control Board.

The presence of Carbon Monoxide (CO) in the air was found to be below the standard value of 2ug/m^3 in the city. Yet in January and February this year its presence was more compared to last year. However, Carbon Monoxide was found mainly in areas like Shivajinagar, Hadapsar and Katraj.

Similar to Carbon Monoxide, the proportion of Sulphur oxides in the air is also said to be rising. Although, it is still found to be below the standard level laid down by the Central Pollution Control Board, the increasing number of vehicles is inturn increasing the levels of Sulphur-based pollutants in the air.

According to Dr Mahendra Kawedia of Jehangir hospital, the rise in air pollutants is affecting the health of citizens in various ways. He said, “Over the years, cases of bronchitis and asthama have been on the rise. With rising air pollution, people who are more susceptible to it start suffering from lung problems and sometimes these diseases become chronic.”

Dr Sanjay Gaikwad from Sassoon General Hospital, too, said that rising air pollution level is a serious concern as the percentage of airborne diseases is significantly growing in the city, thus putting the lives of the residents at risk.

With over 40 lakh vehicles registered in Pune, the city is also witnessing rise in factors contributing to its increasing air pollution levels.

According to the statistics available with the Regional Transport Office (RTO), Pune, close to two lakh new vehicles are seen on city roads every year. The total number of vehicles registered in Pune till July this year is 43,30,635. Out of these 25,07,428 are two-wheelers while 6,07,886 are four-wheelers.

Speaking about this rising air pollution in the city, PMC’s environment officer Mangesh Dighe told Hindustan Times that this rise in air pollutants is mainly because of the rise in the number of vehicles in the city.

“Pollutants like Nitrogen Oxide, Carbon Monoxide and Sulphur are a result of the smoke emitted from the vehicle’s exhaust. With rising number of vehicles on the roads, these pollutants are also rising,” added Dighe.

He further stated that even as various industries also contribute to rise in air pollutants, those kind of industries are not there in the vicinity of Pune in large numbers.

“Pune mainly has assembling industries or service industries which do not release pollutants like Sulphur, Nitrogen Oxide or Carbon Monoxide. Hence, the only major factors for rising air pollution are the vehicles, “ he added.

He further stated that with this rise in number of vehicles, the dust also does not settle and keeps floating in the air, thus increasing levels of particulate matter in the air.

Dighe stated that the Bharat Stage IV vehicles are seen to cause less pollution compared to the older vehicles which are still seen in large numbers on the roads.

“If vehicles use alternate fuels like CNG or LPG, then this rise in air pollution can be controlled as these are clean fuels. Hence, the use of CNG and LPG needs to be popularised in the city,” he added.

Environmentalist Vinod Bodhankar stated that apart from the air pollution caused due to vehicles, a significant component in the particulate matter present in the air comes from burning of plastic. He stressed on the need to reduce plastic consumption as only seven per cent to nine per cent of the plastic is genuinely recycled.

The number of vehicles in the city has seen a constant rise with growing population. The population of Pune, whihc was 35 lakh in 211 has increased to 45 lakh in 2017. The absence of a proper public transport system in Pune has propelled the number of private vehicles, particularly two-wheelers.