Due to poor diffusion conditions and an accumulation of pollutants, the air quality in central and southern Taiwan is still poor with harmful levels of pollution reported in 30 air quality monitoring stations, 12 of which are flashing red alerts.

As of 9 a.m. this morning, Taiwan’s Air Quality Monitoring Network is reporting harmful levels of pollution across much of western Taiwan, with more than half of the air quality monitoring stations flashing orange and red alerts for high levels of PM 2.5 concentration.

The Environmental Protection Agency said that the lack of wind in the early morning has led to an accumulations of pollutants. In the afternoon northeastern winds are expected to increase, possibly bringing in more pollution from neighboring countries.

Northern Taiwan may see orange alerts within a short period of time. As diffusion conditions remain poor, southern and central Taiwan will likely continue to see red alerts throughout the day. The EPA predicts that red alerts will continue to be seen in Yunlin, Chiayi and Tainan counties, while orange alerts will be seen in central Taiwan, Kaohsiung, Pingtung, Matsu, Kinmen, and Penghu. Other parts of Taiwan should see moderate to good air.

In response to the poor air quality in Yunlin, Chiayi, and Tainan, Taiwan Power Co. (Taipower) has instructed the coal-fired Taichung power plant to reduce power generation from 7 a.m. to 4 p.m. 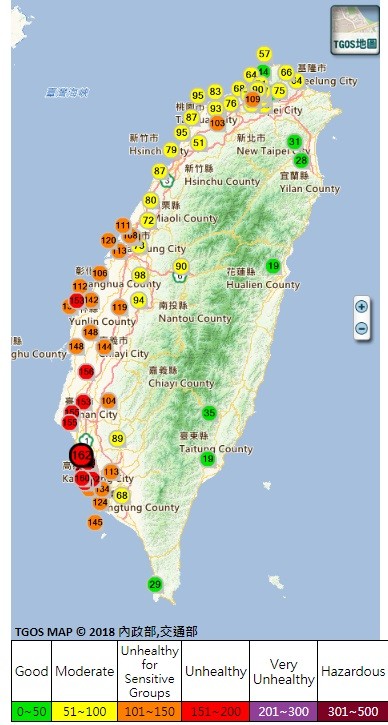