22 of world’s 30 most polluted cities are in India, Greenpeace says

Twenty-two of the world’s 30 worst cities for air pollution are in India, according to a new report, with Delhi again ranked the world’s most polluted capital.

The Greenpeace and AirVisual analysis of air pollution readings from 3,000 cities around the world found that 64% exceed the World Health Organization’s annual exposure guideline for PM2.5 fine particulate matter – tiny airborne particles, about a 40th of the width of a human hair, that are linked to a wide range of health problems.

Every single measured city in the Middle East and Africa exceeds the WHO guidelines, as well as 99% of cities in south Asia and 89% in east Asia. Since many cities, particularly in Africa, do not have up-to-date public air quality information, the actual number of cities exceeding PM2.5 thresholds is expected to be much higher, the report authors said.

The report is based on 2018 air quality data from public monitoring sources, such as government monitoring networks, supplemented with validated data from outdoor IQAir AirVisual monitors operated by private individuals and organisations. 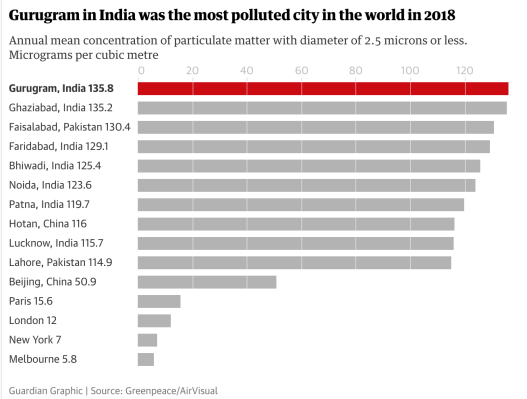 India dominates the top of the list. The tech hub of Gurugram, a city just to the south-west of Delhi which was previously known as Gurgaon, and where international firms including Uber and TripAdvisor have headquarters, ranked the most polluted in the world with an average of more than 135 micrograms of PM2.5 per cubic metre (µg/m3) throughout the year. Delhi is ranked 11th.

Faisalabad in Pakistan is ranked third with 130 (µg/m3), with Lahore 10th. Dhaka in Bangladesh is ranked 17th. The only other country to feature in the top 30 is China, which appears five times, including Hotan in the western Xinjiang province (eighth) and the ancient Silk Road city of Kashgar (19th).

The highest-ranking capital cities are Delhi, Dhaka and Kabul in Afghanistan (52nd). The Bosnian capital, Sarajevo, is the most polluted European city with an annual average of 38.4 µg/m3. London is the 48th most polluted capital with 12.0 µg/m3 and Washington DC 56th with 9.2 µg/m3.

“Air pollution steals our livelihoods and our futures, but we can change that,” said Yeb Saño, executive director of Greenpeace Southeast Asia. “We want this report to make people think about the air we breathe, because when we understand the impacts of air quality on our lives, we will act to protect what’s most important.”

The WHO estimates that 7 million people a year die prematurely from exposure to air pollution globally, with the World Bank calculating the cost to the world economy in lost labour as $225bn.

via 22 of world’s 30 most polluted cities are in India, Greenpeace says | Cities | The Guardian