The number of annual deaths caused by pollution around the world is now greater than malaria and HIV combined, according to a recent study, with scientists warning that fatalities could reach 6 million a year by 2050 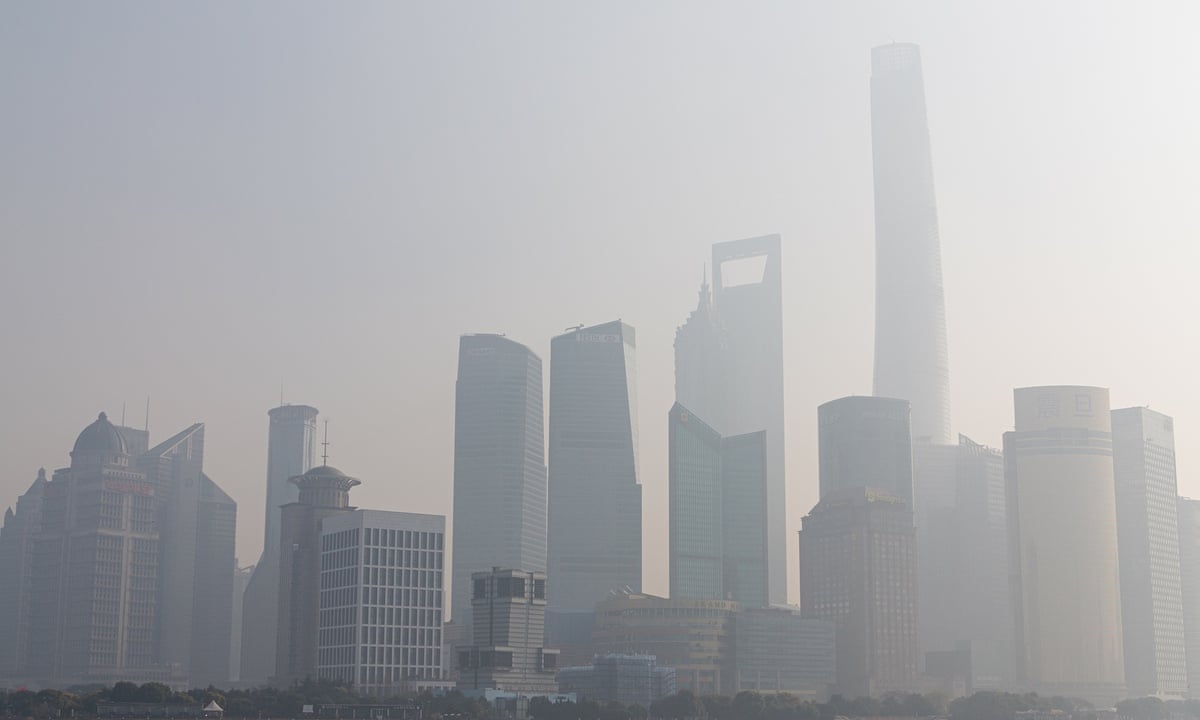 During these cold winter days, Anumita Choudhury dare not leave her small second-floor apartment in Delhi’s northern suburbs. Elderly now, she has developed asthma. The last time she ventured into the streets of the world’s second most populous city she began gasping for breath and had to be helped home by her neighbours.

The story is the same in many of the world’s great cities. From Kabul in Afghanistan to Hong Kong and Shijiazhuang in China, and from Lima to São Paulo in Latin America, people are increasingly suffering in severe toxic smogs – leaving hospitals and health clinics flooded with people with respiratory and heart problems.

Foul air has blanketed much of urban Asia for many weeks already this winter. In Delhi, where there are nearly nine million vehicles, the high court has compared conditions to “living in a gas chamber”; Beijing and 10 other Chinese cities have issued red alert warnings; in Tehran, where the mayor, Mehdi Chamran, says air pollution kills up to 180 people a day, the smog has been so bad that schools have been closed and sports banned.

According to the World Health Organisation, the toxic fumes of growing numbers of diesel cars are combining with ammonia emissions from farming, wood and coal fires, tyre burning, open rubbish dumps, and dust from construction sites and brick kilns. The consequence is a global crisis that threatens to overwhelm countries’ economies as people succumb to heart and respiratory diseases, blood vessel conditions, strokes, lung cancers and other long-term illnesses.

“It’s bad now, but we just don’t know what will happen in future,” says María Neira, WHO public health chief. “This is the first generation in human experience exposed to such high levels of pollution. In the 19th century pollution was bad, but it was concentrated in just a few places. Now there are huge numbers of people living with high levels of pollution. Nearly 70% of people in cities are exposed to pollution above recommended levels.”

The problem is most acute in Asia, but many industrialised countries have been hit by smog this winter. Milan, Naples, Barcelona and some other cities in Spain declared an emergency and banned traffic for several days over Christmas; Poland’s most popular mountain resort, Zakopane, was choked in fumes; and several London streets breached their annual limits for nitrogen dioxide just days into 2016.

According to a recent study in Nature, led by Johannes Lelieveld, director of the Max Planck Institute for chemistry in Germany, more people now die from air pollution than malaria and HIV combined. They include 1.4 million people a year in China and 650,000 in India. This compares with about 180,000 a year in Europe.

New WHO figures on 2,000 cities, to be released next month, will show pollution worsening in many countries. At the last count in 2014, 15 out of the 20 most polluted places were in India and China. The others were in Pakistan, Iran and Bangladesh. Of the worst 100, nearly 70 were in Asia and only a handful in Europe or the US.

But the WHO figures include only those cities that measure air pollution, and many of the worst offenders do not. “As the world urbanises, the pollution grows,” says Frank Kelly, director of environmental health research at King’s College London. “We suspect that many African cities have terrible pollution problems, but there is very little data. We know that places like Tehran are very polluted. In Europe the pollution is relatively clear in places like Germany, France and Britain, except for the diesel, but in eastern Europe, where they still have old industries, it is still very bad.”

After years of being discounted as an unavoidable cost of economic progress, air pollution is rising up the political and economic agendas, as developing countries grasp that the crisis threatens to cripple their economies and lead to simmering dissent.

According to a recent WHO study, the cost of disease and the premature deaths caused in Europe every year by air pollution was more than $1.6trillion in 2010, nearly 10% of the gross domestic product of the EU in 2013. The UK was estimated to have suffered $83bn (£54bn) in costs associated with air pollution. Elsewhere in Europe, the figures were Germany $145bn, and France $53bn. The highest was in Bulgaria, which spent an estimated 29.5% of its GDP on the costs of air pollution fatalities.

More than 90% of citizens in the European region are exposed to annual levels of outdoor fine particulate matter above WHO’s air quality guidelines. This accounted for 482,000 premature deaths in 2012, from heart and respiratory diseases, blood vessel conditions and strokes, and lung cancer.

As concern over pollution grows, cities have begun to take action. On Friday, Delhi ended a two-week trial that took a third of the city’s three million private cars off the road by alternating entry to an odd and even number plates scheme and a ban on large diesel SUVs. City authorities said the trial resulted in a 50% drop in air pollution “primarily caused by vehicular traffic”, but this is disputed.

China has recognised the problem and copied western countries by moving power stations out of cities. This, along with years of heavy investment in renewable energy and increased fines for polluting industries, has improved air quality in some areas. However, away from big cities such as Beijing and Shanghai pollution is still bad.

“It was inevitable in places like London in the 19th century, when health was not considered so important,” says Neira. “But today it is irresponsible to allow it, and the argument of economic development is not valid. We need to develop a different culture in our cities. We need much better public policies.

“It needs social pressure and more awareness. There is no going back. People will not accept pollution. But not cities are aware how serious it is.”

If emissions continue to rise at current rates, the number of smog-induced deaths could double to more than six million a year by 2050, says Lelieveld.

“It is a grim scenario, but I doubt people will accept a doubling of pollution. It is a warning. Pollution is still getting worse, but the awareness is changing and there is a willingness to deal with the problem.”

The Chinese capital has long suffered from serious air pollution from coal burning and industry, but embarrassment at the Olympic Games, the closure of many factories and the removal of power plants from the centre have drastically cut pollution levels. There is a new willingness to deal with it, but pollution remains a big public health threat and Beijing was one of 10 Chinese cities that declared an emergency red alert last month.

The fast-growing Afghan capital city is one of the unhealthiest in the world, surrounded by hills that trap pollution for days on end and full of cars and buses burning low-quality fuel and millions of houses being warmed with wood and paraffin. According to doctors in the main hospital, air pollution is now the greatest cause of death, killing more than 3,000 people a year – more than from war, terrorism, road accidents or HIV and Aids. Air pollution is also bad in other Afghan cities such as Herat, Kandahar, Jalalabad and Mazar. 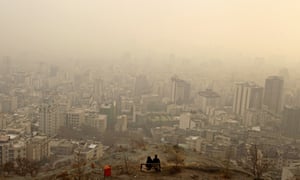 Iranian cities are among the most polluted. Last month the air in Tehran was so bad the city shut all schools, put emergency services on full alert and advised people with cardiac and respiratory problems, as well as pregnant women, to remain indoors. Some of the pollution in the city of five million cars has been blamed on sanctions on imports of refined petrol. This, it is said, has led to the use of low-quality alternatives.

Bangladeshi cities such as Dhaka, Narayanganj and Gazipur are some of the most polluted and fastest growing in the world. Brick kilns, tyre burning, old cars and heavy traffic combine to make them dangerous to live in. “What good is a growth rate of 6% if the air is unbreathable and puts people at high risks of respiratory diseases and other health problems?” a recent editorial in the New Age newspaper asked.

Air pollution in the fast-growing Nigerian city, the largest in Africa, is reaching dangerous levels. But, as in many cities on the continent, there’s little monitoring of pollution and no accurate information on fuel consumption. Pollution is likely to be as bad as the worst of Indian and Chinese cities.

Los Angeles used to be notorious for its smogs but cleaner cars and better regulation has improved air quality. Some of the worst air in the US is now found in nearby Bakersfield in the San Joaquin Valley, a farming area surrounded by mountains that trap pollution from traffic and agricultural emissions. Warm weather often leads to dangerous photo-chemical smogs. 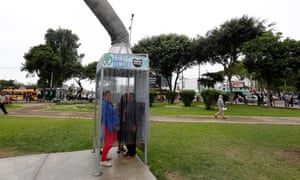 Peru’s capital has the worst pollution in Latin America, according to a 2014 study by the World Health Organisation. Poor fuel, old buses and cars and the city’s geography between the Andes to the east and the Pacific Ocean to the west, all make the air foul at times. Nearly 80% of the estimated 5,000 deaths a year from pollution may be caused by the city’s fleet of old minivans and buses. The many poor areas are the most polluted and are often sited close to open waste dumps and other sources of pollution.

Air quality in the Egyptian capital city of more than seven million people is often 100 times above World Health Organisation safe limits. The toxic fumes of a million mostly old cars mixes with smoke from farmers burning rice straw, industrial pollutants and desert and construction work dust. Heart disease, stroke and respiratory infections are now among the top four causes of premature death in the capital. In August of last year, the Egyptian environment ministry declared a state of emergency to deal with a thick layer of pollution that hung over the city for days.

With 9 million vehicles and 25 million people, Delhi is possibly the most polluted mega-city in the world, often covered in a foul-smelling toxic haze. The pollution was so bad last month that the city authorities imposed an on- and off-traffic system to try to reduce the number of cars of the choked roads. It also banned large diesel SUVs for two weeks but the full effects have not been analysed.

Once known for its smogs because of massive coal burning, it is now plagued with noxious NO2 gas from hundreds of thousands of diesel engines and the particulates emitted by taxis, central heating systems and construction sites. The government does not expect the city to meet legal pollution levels until 2025. Last week London breached its own legal limit on air pollution for the whole of 2016 in just over seven days.