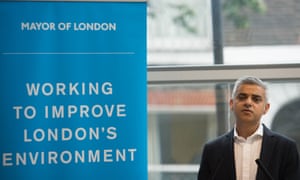 Londoners are backing Sadiq Khan’s plans to crack down on air pollution in the capital, with more than 70 per cent of residents supporting plans to bring forward measures to restrict polluting vehicles in the city, according to the results of the Mayor’s air quality consultation.

Some 15,000 people responded to the Mayor’s office air quality consultation this summer – the highest number of responses to a City Hall consultation ever. Nearly 80 per cent of respondents said they supported Khan’s plans to bring forward the introduction of the Ultra Low Emission Zone – currently due to enter force in 2020 – to 2019, while 71 per cent said the zone should be expanded to encompass the north and south circular.

Londoners also strongly backed an early £10 Emissions Surcharge, dubbed the “T-charge”, on high polluting vehicles entering the capital’s centre from 2017. More than 80 per cent of people backed this measure, which would apply to most cars registered before 2005. City Hall said it will now start to consider the practicalities of implementing the T-charge in more detail, ready for introduction next year.

Evidence suggests almost 9,500 Londoners die every year from long-term exposure to air pollution, while 443 schools in the capital are located in areas with poor air quality.

“A record number of Londoners responded to our consultation, which demonstrates they feel just as strongly as I do that cleaning up the capital’s killer air has to be a major priority,” Khan said in a statement. “Both the previous Mayor and the government failed to get their act together to meet legal pollution limits and that’s why I have put forward some bold, hard-hitting measures to tackle this issue head on. I will consider the consultation findings in more detail before deciding on the next steps.”

Earlier this week Khan set out a new action plan for London’s taxis, including the introduction of a new scrappage scheme for the oldest taxis from next year. Up to £5,000 will be available to drivers who retire their vehicles, Khan pledged, with £3,000 available towards the purchase of a new zero emission capable (ZEC) cab. Meanwhile, drivers of ZEC taxis will receive exclusive access to facilities such as green cab ranks.

It echoes calls made in April by MPs who warned that air quality in Britain is a “public health emergency” and urged the government to take urgent action to crack down on pollution by introducing more clean air zones and a diesel scrappage scheme.

However, in the government’s official response to the MPs’ report, published yesterday, it rejected calls for a national scrappage scheme. “We have considered the use of scrappage schemes both linked to the purchase of ultra low emission vehicles and more generally and have concluded that this may not be an appropriate and proportionate response to the challenges we face, as air quality exceedances are often localised and can be managed in other ways,” the response said.

Instead, the government insists its plan of introducing Clean Air Zones in cities across the UK, as well as investment in low-emission vehicles, the introduction of charging networks and measures to cut pollution from industry and agriculture, is adequate.

The response sparked anger from air quality campaigners. “Despite the mounting evidence of the dangers people face having to breathe our illegally dirty air, the government is refusing to take the bold action needed to cut the 40,000 early deaths from air pollution each year in the UK,” Friends of the Earth air quality campaigner Jenny Bates said in a statement.

“Road traffic is the biggest problem for air pollution and diesel is the worst of all. We urgently need the government to put in place a plan to phase out diesel from our roads. A carefully-designed scrappage scheme would be an important step to help people switch away from dirty diesel vehicles – but the government has today rejected this vital recommendation.”