Study shows extent to which US and western European demand for clothes, toys and mobile phones contributes to air pollution in developing countries 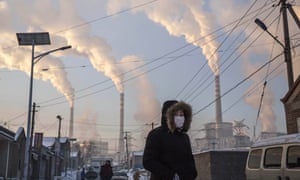 Western consumers who buy cheap imported toys, clothes and mobile phones are indirectly contributing to tens of thousands of pollution-related deaths in the countries where the goods are produced, according to a landmark study.

Nearly 3.5 million people die prematurely each year due to air pollution, the research estimates, and about 22% of these deaths are associated with goods and services that were produced in one region for consumption in another.

The analysis provides the first detailed picture of the extent to which consumer demand in the US and western Europe contributes to pollution in developing countries, with profound health consequences.

“If the cost of imported products is lower because of less stringent air pollution controls in the regions where they are produced, then the consumer savings may come at the expense of lives lost elsewhere,” the authors conclude.

The study also reveals how emissions from industrial hotspots affect the health of people in neighbouring countries and, to a lesser extent, more distant regions, as pollutants circulate on global air currents. About 12% (411,100) of early deaths globally were related to air pollutants emitted in a different region of the world, the research found.

The study focused on the emission of fine particulate matter pollution (PM 2.5) from power stations, factories, aeroplanes and shipping in 13 regions, taking in data from 228 countries. Particulates are thought to account for more than 90% of the global mortality from outdoor air pollution, raising the number of deaths from heart disease, stroke, lung cancer and asthma.

The tiny particles can trigger asthma attacks in the lungs and can cross from the air sacs in the lung into the bloodstream, where they can cause inflammation, alter the way blood clots, and make blood vessels more permeable. Particulates have also been shown to migrate into other tissues, such as the liver, kidneys and brain, although it is less clear what the health consequences are in these organs, and the effects also depend on the chemical makeup of the particulates.

“In general, air pollution links to general ill health,” said Matthew Loxham, a toxicologist at Southampton University who was not involved in the study. “It’s a range of different conditions.”

The scientists used a combination of air pollution data, emissions measurements and models of global air currents to tally up where pollution was emitted and where it ended up in 2007. An economic model, based on data from the Global Trade Analysis Project, was then used to attribute air pollution to the demand of consumers for finished goods, although the results were not broken down by product type.

Chinese emissions caused more than twice the number of deaths worldwide than the emissions of any other region, followed by emissions produced in India and the rest of the Asia region. The scientists calculated that PM 2.5 pollution produced in China is linked to more than 64,800 premature deaths in other regions, including more than 3,000 deaths in western Europe and the US.

However, this figure was significantly outweighed by the 108,600 premature deaths in China linked to consumption in western Europe and the US.

Steven Davis, a co-author based at the University of California, Irvine, said that the paper simply aimed to lay out the evidence for the benefit of policymakers. “It’s not really up to us to say what’s fair or not,” he said.

In a press briefing this week, his co-authors called for international action on the issue.

“For greenhouse gas emissions we have a global agreement. People can argue about whether its been effective or not – but at least we have a global framework,” said Dabo Guan, a professor in climate change economics at the University of East Anglia and the paper’s senior author. “People have thought air pollution was a local issue.”

Guan cites the example of mobile phones made in China, which might be sold for $200, around 70% of which goes to the company that designed the product and just $5-6 to the Chinese manufacturer.

“On average every six months we change our phone,” he said. “It has a health cost on the other side of the world.”

For countries like China, whose economies are dependent on exporting cheaply-made goods, improving environmental standards has to be balanced against potential negative economic impacts.

“Some other country would step up and say hey, we’re willing to let our people die to have that business,” said Davis.

Improving pollution control technologies in China, India and elsewhere in Asia would have a disproportionately large health benefit in those regions and worldwide, according to the analysis in the journal Nature.

Qiang Zhang, another author from Tsinghua University, Beijing, said that consumers in Europe and the US who buy cheap imported toys and clothes also bear a responsibility.

“We need to move our lifestyles away from cheap and wasteful,” he said.

Oliver Hayes, a pollution campaigner for Friends of the Earth air pollution, said: “No-one should be denied the right to breathe clean air, whether they live in Beijing or Barking. But air pollution doesn’t recognise borders, and it’s clear that the devastating impacts of polluters can be felt many miles from their activities.