London mayor cites figures showing that the home stoves, used in 16% of households, produce up to a third of all the capital’s fine-particle pollution 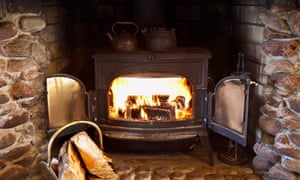 Wood-burning stoves could be banned in some areas to combat air pollution under proposals by the London mayor, Sadiq Khan.

Khan has written to Michael Gove, the environment secretary, to request extra powers to improve air quality in the capital, including measures to tackle solid-fuel burning and construction pollution. The proposed measures include minimum emissions standards for vessels on London’s waterways and heavy construction machinery like diggers and bulldozers.

Wood-burning stoves, which would be banned under the proposals for urban areas with poor air quality, are increasingly popular – 1.5m have been sold across Britain. They are most popular in south-east England, where 16% of households have them, compared with 5% nationally.

It is estimated that between a quarter and a third of all of London’s fine-particle pollution comes from domestic wood burning. In January, during a period of very high air pollution, it contributed half the toxic emissions in some areas of the capital, according to King’s College London research.

Khan said: “Non-transport sources contribute half of the deadly emissions in London, so we need a hard-hitting plan of action to combat them similar to moves I am taking to reduce pollution from road vehicles.

“With more than 400 schools located in areas exceeding legal pollution levels, and such significant health impacts on our most vulnerable communities, we cannot wait any longer, and I am calling on government to provide the capital with the necessary powers to effectively tackle harmful emissions from a variety of sources.”

The mayor has asked the environment department to amend the Clean Air Act to allow for the creation of zero-emission zones where the burning of solid fuel is not allowed from 2025 onwards.

When asked to comment on Khan’s letter, a Defra spokesperson told the Guardian: “We are determined to improve air quality and have put in place a £3bn plan to reduce roadside emissions.

“Next year we will publish a comprehensive Clean Air Strategy which will address all sources of air pollution. We are also raising consumer awareness about the impact of burning wood on health and working with industry to help reduce harmful emissions.”

The mayor’s proposals come after he triggered London’s emergency air quality alert on Wednesday for the seventh time in thirteen months. Polluted air from the continent combined with toxic air in London to create dangerous levels of pollution.