The Amazon Has Seen More Than 100,000 Fires This Year, Causing Spike in Air Pollution 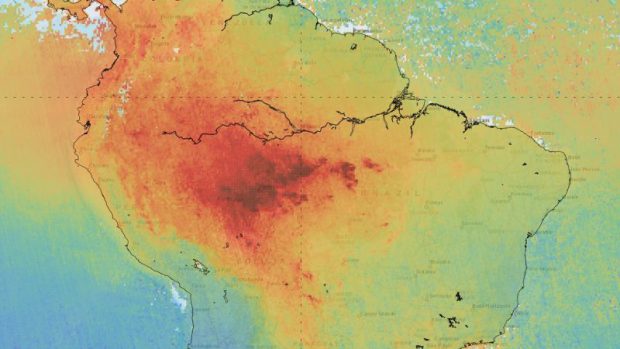 The fires burning throughout the Amazon rainforest and the rest of Brazil are billowing all types of air pollutants into the atmosphere, new satellite images from the European Space Agency (ESA) show.

The agency released the images Monday, reminding the world that the Amazon fires aren’t just an environmental issue — but a public health issue, as well. The images come as the number of Brazil’s forest fires soar past 100,000, a 45 per cent increase from this same time last year, according to Brazil’s National Institute for Space Research.

With the spike in fires, ESA found that the rates of dangerous pollutants like carbon monoxide, formaldehyde, and aerosols have gone up dramatically this year compared to last. The particulate matter from the organic matter going up in flames can cause respiratory or cardiac issues for individuals exposed. Carbon monoxide can make it harder for individuals to breathe by reducing oxygen levels. The World Health Organization issued a warning to vulnerable communities just last week because of all this air pollution.

There are also environmental impacts as well. The black carbon emissions from the fire are absorbing sunlight and blocking outgoing energy, a process that can worsening warming. The forest is also releasing carbon dioxide from its burning trees, another factor that could speed up global warming.

Many suspect that President Jair Bolsonaro’s new reign in the country has everything to do with this rise in Brazil’s forest fires. He’s been outspoken about handing the Amazon over to private interests, which burn the forest to clear land for crops, cattle, mining, and timber. The indigenous communities that live under the forest canopy have the most to lose as the Amazon continues to burn.

These maps show how much carbon monoxide has increased. (Image: European Space Agency)

Unfortunately, the Amazon forest fires are part of a greater global trend: The number of global fires increased by nearly fourfold last month compared to last year. August 2018 saw 16,632 fires. August 2019? 79,000. The world is on fire.

via The Amazon Has Seen More Than 100,000 Fires This Year, Causing Spike in Air Pollution | Gizmodo UK